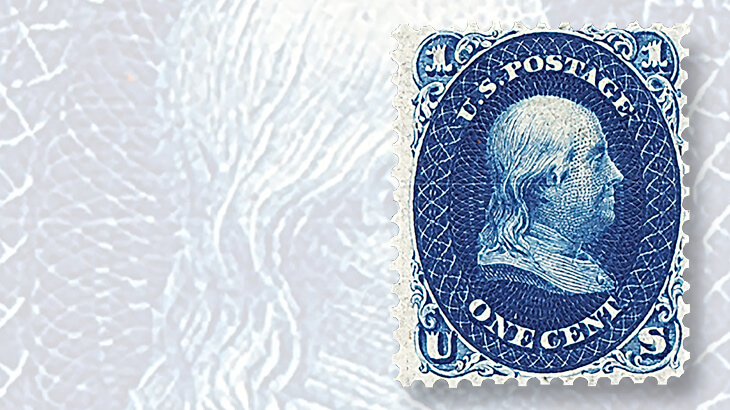 The United States 1861 1¢ indigo (Scott 63-E11e) of the Premiere Gravure, or August, issues. Stanley Ashbrook and Hugh M. Clark, two titans of classic U.S. philately, had an illuminating discussion about the Premiere Gravure stamps in 1940. Now that the P

In this column in the May 22 issue of Linn’s, we announced that the Philatelic Foundation and the Collectors Club will be sharing a home beginning Dec. 1.

The Philatelic Foundation is one of the world’s most esteemed expertizing bodies, and recently, the organization turned on the afterburners to promote the importance of its role in the stamp hobby.

A recent announcement from the PF started out stating, “So many good things are happening at The Philatelic Foundation, and we want to let you know more about them.”

The announcement came in the form of what is to become a series of emails titled “What’s New at the PF.” The contents of the emails also will be posted on the PF website.

The PF has digitized Ashbrook’s files and made them available free on its website. The digitization was made possible through a grant from the David T. Beals III Charitable Trust

A quick review of the digitized images from Ashbrook’s scrapbooks revealed several examples of correspondence between Ashbrook and Hugh M. Clark.

Clark was editor of the Scott catalogs from 1936 to 1946, and Ashbrook was an advisor for the U.S. stamp listings in the catalog.

An exchange between the two men mentioned the so-called August, or Premiere Gravure, issues.

“Re - the 1861 Issue. Sooner or later the catalogue is bound to recognize the fact that the August stamps were,

“2nd - That they have no excuse for being in the catalogue for the reason that these labels were not made under Government supervision, … The ‘Augusts’ were merely samples of work which the National Bank Note Co. submitted to the Government in their effort to obtain the 1861 contract.”

In his letter of reply dated May 21, Clark writes, “So far as the ‘August’ issue is concerned, I still want to talk this over with you in far greater detail than is possible by correspondence.”

At that time, the stamps were listed as Scott 55-62. Likely at Ashbrook’s urging, an editor’s note was added to the 1940 Scott United States Stamp Catalogue (later renamed the Scott Specialized Catalogue of United States Stamps and Covers) stating, “It is doubtful that Nos. 55, 56, 57, 59, 61 and 62 were regularly issued.”

Beginning with the 1991 U.S. Specialized catalog, the August issues, or, more correctly, Premiere Gravure issues, including Scott 58, were moved to the Special Printings section of the catalog. A footnote stated that “No. 62B unused cannot be distinguished from No. 58, which does not exist used.”

An Essays section was added to the 1992 Scott U.S. Specialized catalog, and the Premiere Gravure issues were renumbered and listed in the Essays section or Trial Color Proofs section of the catalog.

In the 2003 U.S. Specialized catalog, Scott recognized that the former 58 and the current 62B actually were the same stamp, and 58 was deleted from the listings.