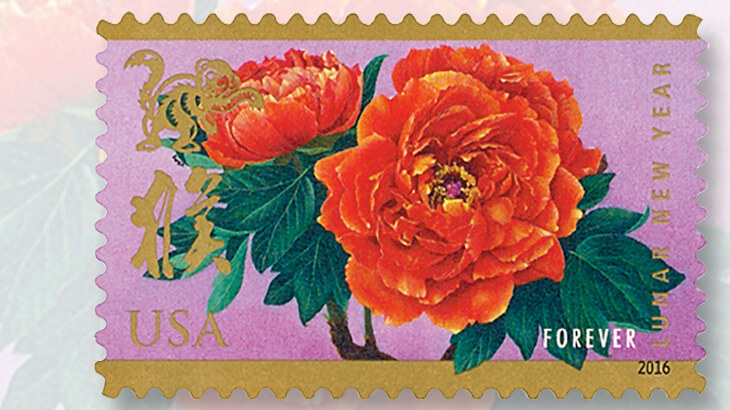 The 2016 Chinese New Year stamp was the last issue for which the United States Postal Service made available imperforate uncut press sheets. First introduced in 2012, imperforate press sheets proved popular with collectors. Despite this, the USPS apparent

To the dismay of many collectors, the United States Postal Service appears to have killed one of its most profitable new products: uncut press sheets of imperforate stamps.

Sales of the imperforate press sheets had created a boomlet of excitement in the hobby during the almost four years that they were produced.

But five years later, the sheets have become mired in controversy.

The last issue to be offered in imperforate uncut press sheets was the Chinese New Year stamp issued Feb. 5, 2016 (Scott 5057).

The absence of any new issues has convinced collectors that the USPS has abandoned issuing more imperforate sheets.

“I think it is pretty obvious that they have stopped production of no die-cut press sheets,” said Cincinnati collector Jill R. Ambrose, co-author of A Guidebook and Checklist — U.S. Postal Service No-Die-Cut Stamps 2012 to 2015.

“I have no idea why USPS stopped production,” Ambrose said in an email to Linn’s.

She was among the collectors who have urged the USPS to continue issuing the sheets, citing the large amount of cash their sales can bring a postal service in need of increased revenues.

Sales of uncut press sheets with die cuts around the stamps have continued, but it was the imperforate uncut sheets that triggered much of the excitement among collectors.

Stamps from the imperforate sheets were seen as a new part of the hobby and were assigned separate numbers by the Scott catalog editors.

The Postal Service said in February it would issue die-cut uncut press sheets in a “standard print quantity” of 1,000.

Postal officials have said little more than the program was being reevaluated, Ambrose said.

When Linn’s inquired May 23 about the promise of a decision on the uncut sheets by Stamp Services officials by the end of 2016, postal officials promised an answer.

But the answer, provided May 30, was the recycling of a brief statement first given to Linn’s in mid-February that does not mention the imperforate sheets.

“The Postal Service is committed to providing products for the philatelic community and collectors; therefore, we will continue to produce die cut press sheets,” the statement said.

“Whether to issue a press sheet for a particular stamp is within the Postal Service’s discretion,” it continued.

“It has never been the Postal Service’s intention to produce press sheets for every stamp issuance.”

Foster Miller, a Maryland collector, told Linn’s he had sought an answer from Mary-Anne Penner, executive director of Stamp Services.

“Last time I asked Mary-Anne Penner, she said that she had nothing to announce,” Miller said.

Ambrose told postal officials in an email last year that she believed the issue of imperforate press sheets represented a great money-making opportunity for the cash-hungry Postal Service.

“First of all, it seems like a wonderful money making project for the Postal Service,” she told Mark Saunders, a postal spokesman, in an email a year ago.

Sales of high denominated stamp sheets can run into hundreds of dollars for one sheet, she noted.

But by producing small numbers of some of the imperforate sheets, the USPS was hurting its own profits, she pointed out.

Saunders said postal officials were determined to make the sales fair to all, which might explain the decision to issue a uniform 1,000 die-cut uncut press sheets for a given issue.

It was the limited number of imperforate sheets of some of the early issues that sent dealer prices skyrocketing to eight times face value or more. In early 2016, the USPS came under fire for keeping imperforate press sheet quantities a secret until just before a stamp was officially issued.

Jim Siekermann, a coauthor of A Guidebook and Checklist with Ambrose, told Linn’s last year that clerks at the Stamp Fulfillment Services center in Kansas City, Mo., would sometimes give collectors misleading and conflicting information about the availability of some of the imperforate issues.