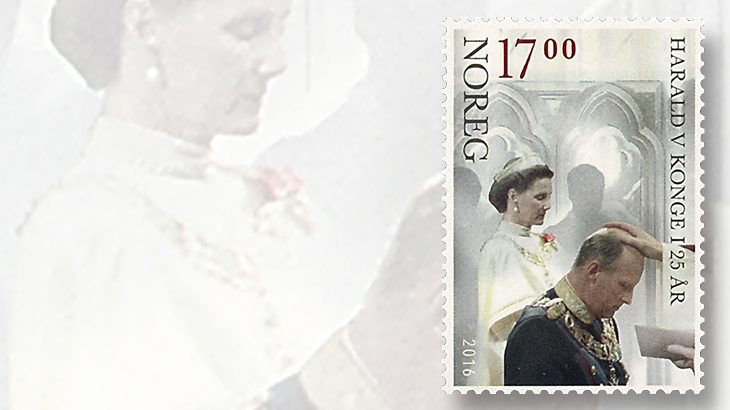 A stamp commemorating the 25th anniversary of King Harald’s accession to the throne was voted as Norway’s most beautiful stamp of 2016. 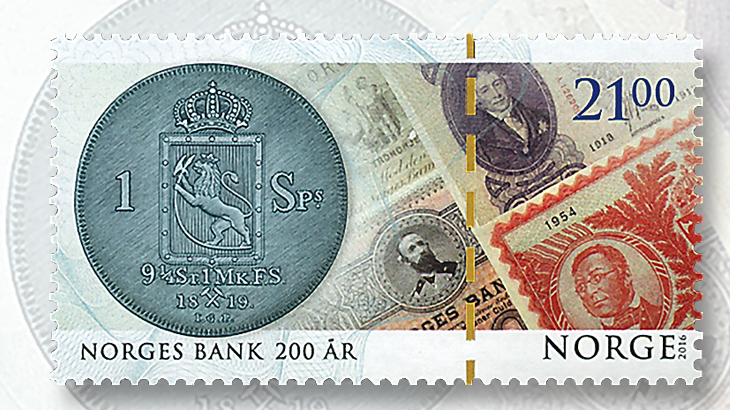 Second place in Norway’s 2016 stamp poll went to a commemorative marking the 200th anniversary of the central bank, Norges Bank. 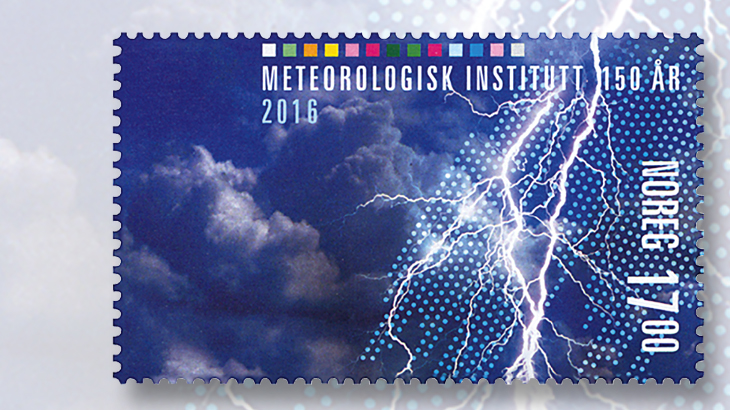 A photograph of a thunderstorm was the basis for this stamp honoring the 150th anniversary of the Norwegian Meteorological Institute. The stamp placed third in Norway’s 2016 stamp poll.
Previous
Next

A stamp honoring King Harald was voted as Norway’s most beautiful stamp of 2016.

Norway Post, the Norwegian Philatelic Federation, and dealer and auctioneer Skanfil for Samlere conducted the poll.

The 17-krone stamp was issued Jan. 11 to mark the 25th anniversary of the king’s accession to the throne. The design depicts the king kneeling with Queen Sonja standing behind him. The the hand of Bishop Finn Wagle is on the king’s head.

Coming in second place in the poll was the 21kr stamp commemorating the 200th anniversary of the central bank, Norges Bank.

Designed and engraved by Sverre Morken, the stamp pictures a 19th-century Norwegian coin and 20th-century banknotes.

The stamp was issued Oct. 1. A 50kr stamp also marking the bank’s bicentennial was issued at the same time.

Coming in third place was one of two stamps issued June 10 to celebrate the 150th anniversary of the Norwegian Meteorological Institute. This 17kr denomination shows lightning and clouds during a thunderstorm.

Stamp designer Bruno Oldani based the design on his own photograph.

Norway Post announced the results of the stamp poll in the second 2017 issue of its publication for collectors, Frimerke posten.