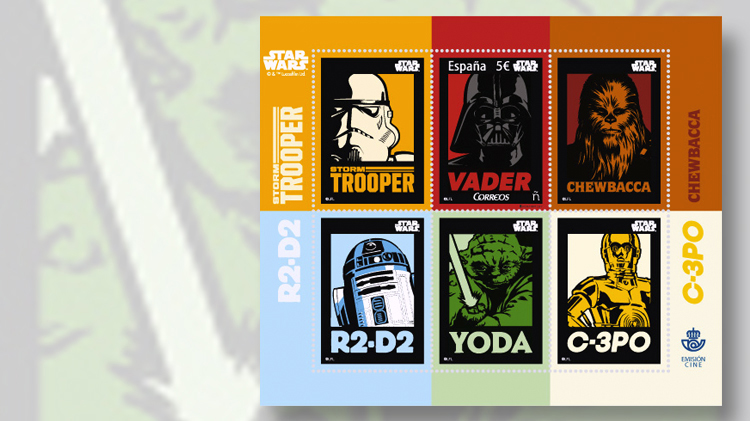 Spain issued this Star Wars souvenir sheet May 25, the 40th anniversary of the opening of Star Wars in theaters. The stamp depicts the film’s villain Darth Vadar. Other Star Wars characters are shown on stamplike labels.

Spain is celebrating the 40th anniversary of the opening of Stars Wars in theaters on May 25, 1977, by issuing a souvenir sheet showing characters from the film.

The sheet, which was issued on the anniversary date, includes a single €5 stamp picturing Darth Vadar. It is surrounded by stamplike labels showing a Storm Trooper, Chewbacca, R2-D2, Yoda, and C-3PO.

Unlike the other characters, Yoda did not appear in the first Star Wars; he was introduced in 1980 inThe Empire Strikes Back, the second film in the series.

Spain’s post office reports that the sheet was printed using a lenticular effect that gives the images an illusion of depth and movement when viewed at different angles. A total of 300,000 sheets were produced.