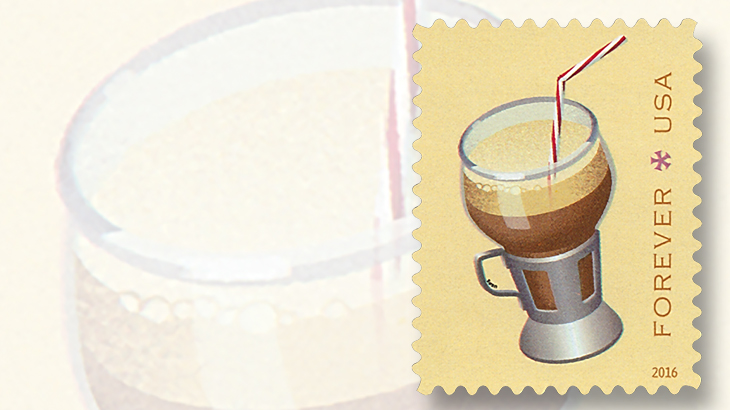 Jeopardy! contestants learned that the egg cream contains neither egg nor cream when shown this 2016 stamp, which they were pressed to identify on the game show’s May 9 episode.

Postage stamps made a return visit to the popular syndicated television game show Jeopardy! on May 9, with a category titled “On a Postage Stamp.”

The episode was part of the show’s Teacher’s Tournament taking place May 8-19.

The three teacher-contestants on the Tuesday episode were Sara Holub of Wisconsin, Mary Parker of Arkansas, and Eduardo Sevilla of Virginia.

As the contestants buzzed through the category, Holub and Parker rang in with correct responses on the first try for each clue.

Following the familiar answer-and-question format of the show, the category in the episode’s first Jeopardy round contained five clues about the subjects of recent United States postage stamps, each read aloud by host Alex Trebek. The contestants competed to respond to each statement with an appropriate question.

The first clue, valued at $200, read, “The hat of this avuncular patriotic character.”

Holub rang in first and correctly asked “Who is Uncle Sam?”

The contestants then ran through the category in ascending order of value, from top to bottom on the clue board.

The $400 clue stated, “This character posed with his creator, Edgar Rice Burroughs.” Parker correctly responded, “Who is Tarzan?”

Burroughs and Tarzan were featured together on a forever stamp issued in 2012 (Scott 4702).

The next clue, for $600, was the first and only clue in the category to picture a stamp on the game board; it was the Egg Cream forever stamp from the 2016 set titled Soda Fountain Favorites (Scott 5094).

Trebek read, “This soda fountain favorite, containing neither ingredient in its name.” Parker correctly responded to the clue.

For $800, the contestants had to name a “Grand” national park in Wyoming. It was back to Holub, who identified Grand Teton National Park, which was shown on a painting in the 2016 National Park Service set (Scott 5080c).

The final clue, for $1,000, stated, “The queen type of this shell used as a trumpet.” Parker rang in first with the correct question, “What is a conch shell?”

Parker, a high-school French and English teacher, was the winner when the game was over, and advances to the tournament’s semifinal round.

U.S. Seashells stamps: When and where they will be issued