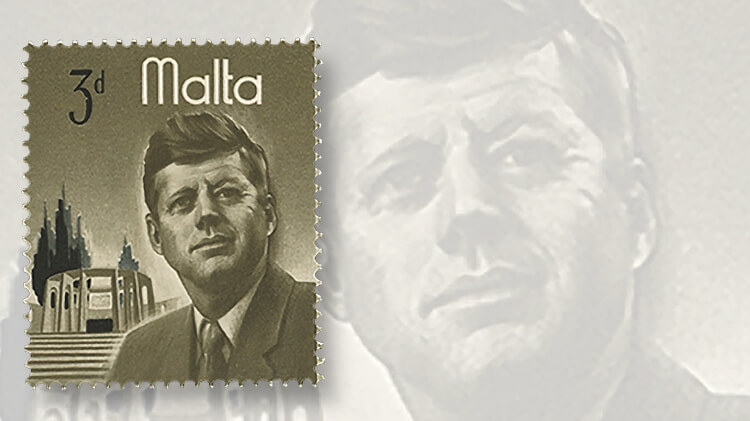 Stanley Gibbons held a sale of British Commonwealth stamps in London March 15-16. One of the eye-catching items was a doppelganger for a United States commemorative honoring President John F. Kennedy issued Feb. 20.

After Kennedy was assassinated in 1963, countries around the world paid homage to him with stamps in his memory. Some featured the same famous photograph of Kennedy looking upward, taken by Ted Spiegel, that was recently used by the U.S. Postal Service on a forever stamp marking the centennial of Kennedy’s birth (Scott 5175).

The island nation of Malta was among those offering tribute, and their adaptation of the photo uses the same olive-brown color recently chosen by the U.S. Postal Service for its Kennedy stamp.

The 3-penny stamp also depicts a shrine at Qawra, Malta, in the background, and normally bears the inscription “Kennedy Memorial Grove 1966” in gold ink.

However, a small quantity of the stamps show the gold omitted (Scott 353a; S.G. 371a). The fine, never-hinged example of this error in the Gibbons sale sold for slightly under $200, including the 18 percent buyer’s premium added by Gibbons.