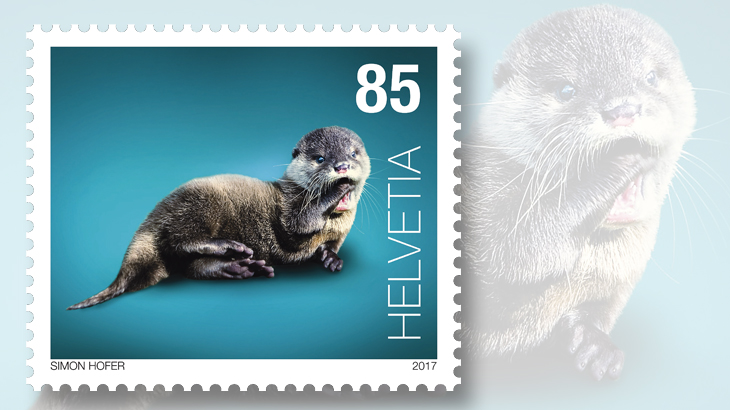 This recent Baby Animals stamp from Switzerland is supposed to show a fish otter, but is said to picture an Asian dwarf otter instead. 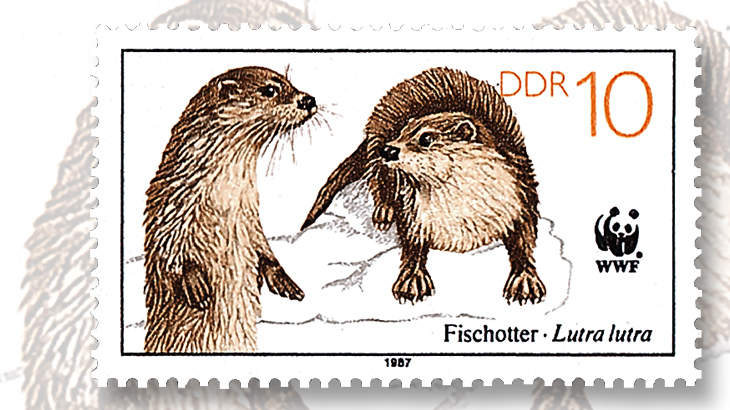 The webbed feet of a fish otter are visible on this 1987 stamp from East Germany.
Previous
Next

Swiss Post pictured the wrong otter on a recent stamp, according to a report published in the Swiss newspaper 20 Minuten.

The 85-centime stamp was issued March 2 in a set of four featuring baby animals.

The design depicts a young otter on a blue background. The only inscriptions on the stamp are the denomination and country name (Helvetia) on the left side, and the designer's name (Simon Hofer) and year date at the bottom.

Despite the lack of an inscription on the stamp naming the animal, Swiss Post clearly intended to show the fish otter (Lutra lutra), also known as the Eurasian otter.

For example, in its new-issue bulletin for collectors, Focus, Swiss Post mentioned that “otters used to be found living on the banks of practically every stretch of water in Switzerland,” but had become extinct in the country in the 20th century due to overhunting. It also noted that attempts were being made to reintroduce this otter.

That description fits the fish otter.  However, according to Switzerland’s Pro Lutra Foundation, the animal featured on the stamp is the Asian dwarf otter, also known as the small-clawed otter.

Irene Weinberger of the Pro Lutra Foundation told 20 Minuten, “Fishing otters have clearly visible webbing and claws as young animals. These are missing from the animal on the stamp.”

The mission of the Pro Lutra Foundation is to reestablish the fish otter in Switzerland.

The stamp will not be withdrawn from sale, according to the May 8 newspaper report by Marco Lussi.

Jacqueline Buhlmann of Swiss Post told Lussi that the Otter stamp and the Baby Animals set were popular with the public, and that they would remain on sale until the scheduled March 2018 withdrawal date. Buhlmann also apologized for the inconvenience.