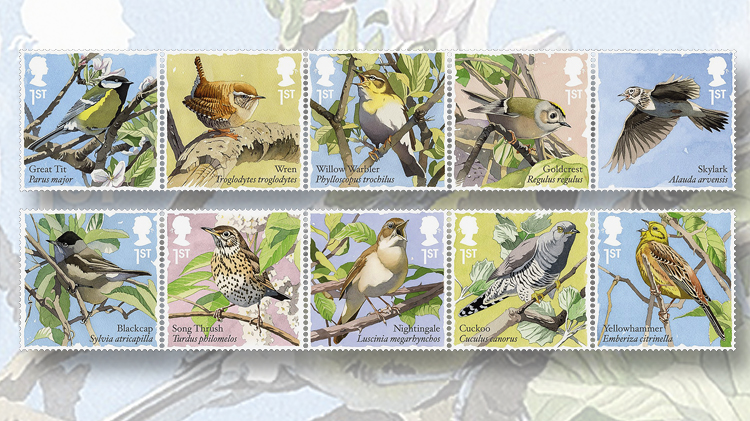 In announcing these stamps, Royal Mail said the “issue explores some familiar and less well-known songbirds, whose song defines the British spring and early summer, from birds with simple songs to those with complex repertoires.”

The stamps are se-tenant (side-by-side) in two strips of five. All of the stamps are nondenominated, paying the domestic first-class rate (currently 65 pence).

One strip of five depicts  the great tit, wren, willow warbler, goldcrest, and skylark, and the other shows the blackcap, song thrush, nightingale, cuckoo, and yellowhammer.

About the size of a house sparrow, the great tit (Parus major) is one the first birds to welcome spring in the United Kingdom.

The British Garden Birds website said: “The Great Tits’ song is varied, but it’s perhaps best known for its piercing ‘teacher-teacher’ song, which sounds very much like a bicycle pump, and is usually heard in the spring and summer.”

What it lacks in size, the small wren (Troglodytes troglodytes) makes up in volume. The Scottish Wildlife Trust compares the size of a wren to a £1 coin and also makes this comparison: “per unit weight, it sings at ten times the power of a crowing cockrel!”

The willow warbler (Phylloscopus trochilus) is a migrant, wintering in  western Africa and returning to England in late spring. Royal Mail described the song of the small bird as a “soft, lisping descent down the scale, much repeated with subtle variations.”

The smallest bird in Great Britain, the goldcrest (Regulus regulus) is a little more than 3 inches in length and has a wingspan of 5 to 6 inches. It prefers pine forests, and its high-pitched song can be heard coming from the tops of tall conifer trees.

The song of the skylark (Alauda arvensis) inspired poet Percy Bysshe Shelley to write Ode to A Skylark in 1820. The first stanza is “Hail to thee, blithe Spirit!/Bird thou never wert,/That from Heaven, or near it,/Pourest thy full heart/In profuse strains of unpremeditated art.”

Because of its song, the blackcap (Sylvia atricapilla) has been nicknamed the northern or mock nightingale. Royal Mail called its song “fruity and fluty” with a mix of “more challenging notes and phrases.”

A year-round resident in Great Britain, the song trush (Turdus philomelos) repeats its phrases when singing.

In the poem Home Thoughts from Abroad, Robert Browning wrote: “That’s the wise thrush; he sings each song twice over,/Lest you should think he never could recapture/The first fine careless rapture!”

Also celebrated in poetry and literature, the nightingale (Luscinia megarhynchos) is plain in appearance but renowned for its song.

Royal Mail said of this songbird: “Nightingales don’t just sing at night; they also sing all day. It’s the most strenuous option taken up by any songbird. And what a song: louder than you’d believe possible, a crescendo of whistles, a deep throbbing drumming, strange radiophonic sounds and snatches of pure melody.”

The cuckoo (Cuculus canorus) sounds just like its name. It arrives from Africa in late spring or early summer, staying only about six weeks before returning.

During that time, many female cuckoos lay their eggs in another bird’s nest, especially meadow pipits, dunnocks, and reed warblers, according to the Royal Society for the Protection of Birds.

The  yellowhammer (Emberiza citrinella) is known by many other names, including yellow bunting. Its call has traditionally been translated to “a little bit of bread and no cheese.” Its song also been compared to the opening of Beethoven’s Fifth Symphony.

The stamps are square, measuring 35 millimeters by 35mm and are perforated gauge 14.5 by 14.

Royal Mail’s other products for the Songbirds set include first-day covers, 10 postcards reproducing the designs of the stamps, and a presentation pack with mint examples of the stamps and text by Simon Barnes, a journalist who writes about sports and wildlife.