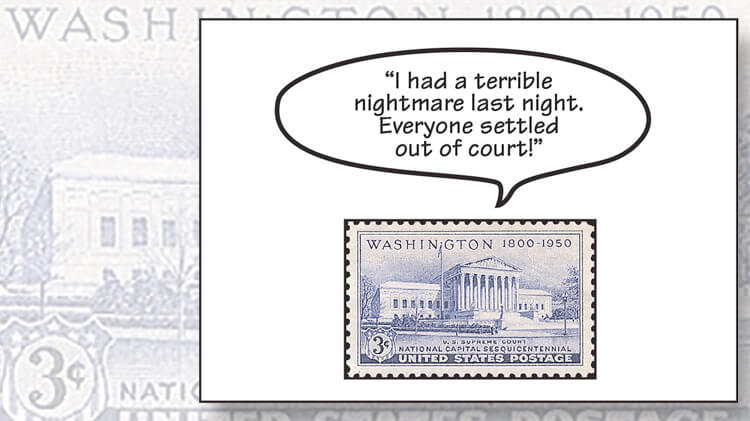 The United States Supreme Court was much in the news during the presidential campaign of 2016, and President Donald Trump’s filling the vacancy following the death of Antonin Scalia just after his Jan. 20, 2017, inauguration kept the subject on the front pages.

So, the 1950 3¢ stamp showing the Supreme Court Building seemed like a good choice for the April cartoon caption contest.

Many clever and creative entries were received.

Steven Kois, from Omaha, Neb., takes us back a few years to the era of the Motown sound, and one of its most popular singing groups with, “If only Diana Ross could be appointed, we’d be Diana Ross and the Supremes!”

Our winners for this month begin with Edgar Dunlap, by email, who submitted the fanciful non-philatelic line winner. Unfortunately, the Court is not in any danger of running out of workload.

On the philatelic side, Terry Meier from Tampa, Fla., wins with, “In my judgment, Wonder Woman is the best-looking stamp of 2016!”

“What law requiring our stamp of approval is next on the docket?” from George Schaetzle of Sheboygan, Wis.

“Now, who ordered the salami on white, and who was the ham on rye?” by Howard Harris from Beaufort, S.C.

“Next Christmas we will not be decorating with Garland!” sent by Terry Meier of Tampa, Fla.

“Does this robe make me look fat?” by Steve Kotler from San Francisco, Calif.

“I just read the Constitution for the Articles,” by Kirk Doan from Kansas City, Mo.

The next cartoon caption contest will be announced in the June 12 Linn’s.