Was humorist Will Rogers a member of the House of Representatives? 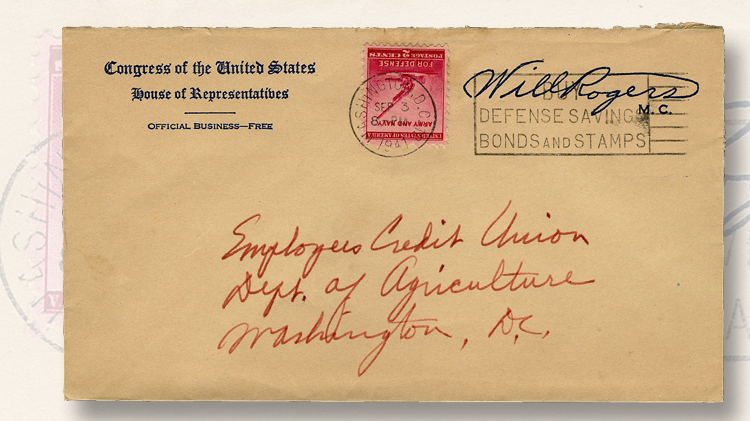 Who sent this 1941 congressional cover? It was not the famous humorist Will Rogers, who died in a plane crash in 1935, nor was it his son, Will Rogers Jr., who served part of a term in the House of Representatives from 1943 to 1944. The answer to the ques

Iconic American humorist Will Rogers has been honored on two United States postage stamps (a 1948 3¢, Scott 975, and a 1975 15¢ in the Performing Arts series, 1801), but was he ever a member of Congress? It might seem so, based on the 1941 congressionally franked cover shown here.

He resigned May 3, 1944, to return to Army service in World War II. Assigned as a lieutenant in the 814th Tank Destroyer Battalion, Rogers served in Europe in George Patton’s Third Army. He was awarded a Bronze Star and Purple Heart, and was released from active duty in March 1946.

Nominated as the Democratic candidate in the 1946 senate election in California, he lost to incumbent William F. Knowland.

Will Rogers Jr. must have run for Congress with a grin, because his father was not a fan of the institution. In his political monologues, Will Rogers regularly critiqued the legislative branch and those who served in it.

Among the quotes that have been attributed to Rogers is this one: “Congress is so strange: a man gets up to speak and says nothing, nobody listens, and then everybody disagrees.”

Even more to the point, he said: “Never blame a legislative body for not doing something. When they do nothing, they don’t hurt anybody. When they do something is when they become dangerous.”

Unfortunately, the father did not live to see his son in Congress; Will Rogers died in a plane crash in 1935.

Look carefully at the cancellation on the Will Rogers congressional cover: It is dated Sept. 3, 1941. How could that be if Will Rogers Jr. was elected in 1942, and took office in 1943?

It turns out that the cover that started me on this trail is not related to the well-known Will Rogers, father or son. It relates to Will Rogers, representative from Oklahoma from 1933 until 1942.

Will Rogers was plenty of things, but was he ever a member of Congress? John M. Hotchner writes that he was not, but his son, Will Rogers Jr. made quite the career for himself in politics. In addition to the breakdown above, Hotchner gives further insight into the world of U.S. philatelic club memorabilia and parody promotions - a topic near and dear to his heart. Subscribe to Linn’s Stamp News to read all about it!