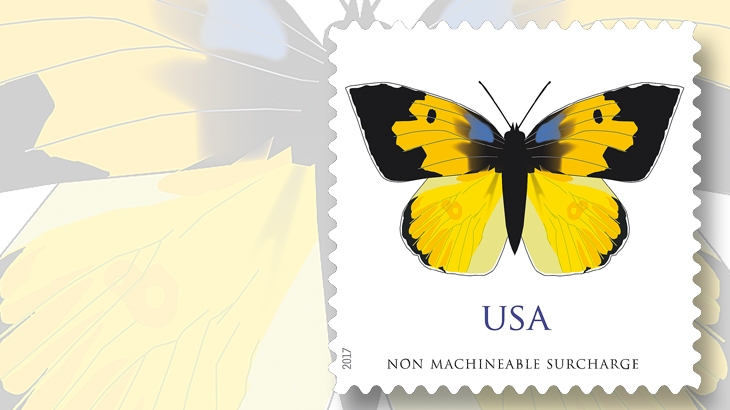 The California Dogface Butterfly stamp was announced in 2016 as part of the 2017 United States stamp program, but the stamp has not been issued and no issue date has been announced.

Collectors wondering if there will be a California Dogface Butterfly nonmachineable surcharge rate stamp issued in 2017 will just have to wait and see.

In response to an inquiry to the United States Postal Service by Linn’s Stamp News requesting a clarification of the announced stamp’s status, USPS spokesman Mark Saunders replied, "Although we reveal the image in advance for items such as nonmachineable surcharge, postcards, stamped envelopes and denominated stamps (just to name a few), they are only printed and issued if we have nearly depleted on-hand inventory and need a replacement. If we make the business decision to issue we will make a formal announcement in the Postal Bulletin."

The California Dogface Butterfly stamp was announced as the seventh stamp in the Butterfly series that fulfills the postage rate for irregularly sized envelopes, such as square greeting cards.

That nonmachineable rate is currently fulfilled by the nondenominated (70¢) Eastern Tailed-Blue Butterfly stamp issued Sept. 24, 2016 (Scott 5136), which is still available at many post offices and through the online postal store.

This article was revised Nov. 28 to include a clarification from the U.S. Postal Service.