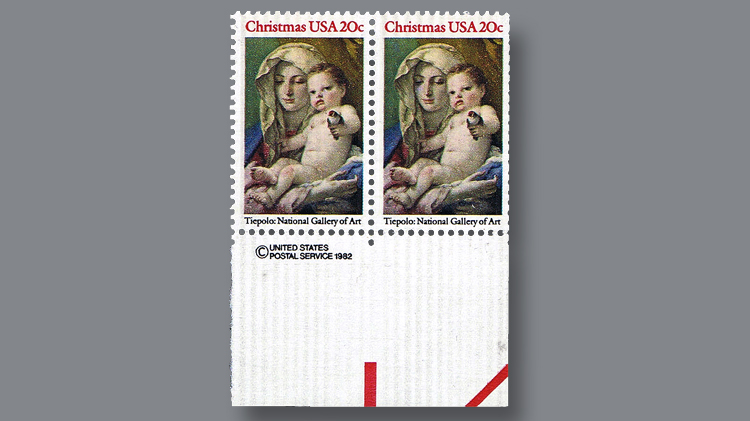 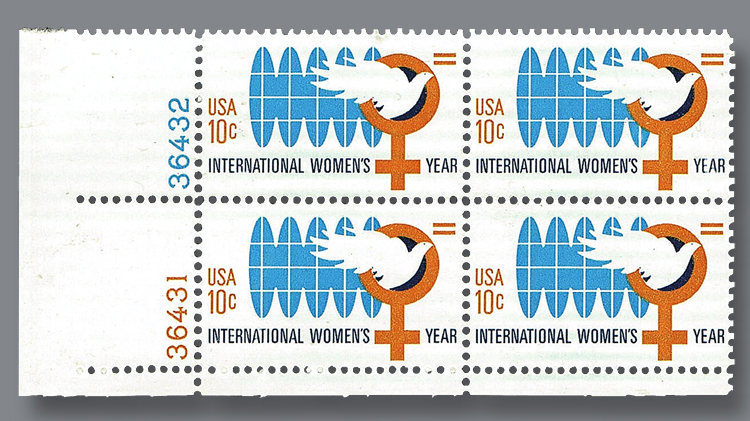 Lightly inked repeating parallel lines are found on some photogravure-printed stamps issued between 1975 and 1982, such as the blue lines on the 1975 10¢ International Women’s Year commemorative stamp. George Brett, an expert on the BEP, called them “chat
Previous
Next

In the 19th century and even into the 20th, the art of printing was fairly simple. But the installation of ever more complex printing equipment at the Bureau of Engraving and Printing blended technology, speed, and start-to-finish production elements. The new presses were capable of printing hundreds of millions of complicated stamps in amazingly short periods of time.

As with today’s automobiles, there are so many more conveniences and labor- and money-saving devices built into these presses, that we too often forget that this means there are more things that can go wrong. Often enough, the things that go wrong require expensive fixes.

Also, with each new generation of presses, a new set of unexpected problems needed to be solved, and these often affected some part of a production run. While electronic inspection for errors could and often did remove defective material from the production line, it never worked flawlessly.

The result is that stamp collectors sometimes encounter odd and unusual flaws that needed to be authenticated as genuine, and this often requires being able to explain how they could have happened.

When the BEP got out of the business of producing United States postage stamps in the early 21st century, the U.S. Postal Service contracted out stamp printing to a succession of private firms, and the same situation with defective material applied to them as well.

The flawed material produced that made it through the system ranged from the easily explainable, such as imperfs or missing colors, to the unexplainable — at least to the average stamp collector.

Many of these flawed stamps are submitted for expertizing, and expertizers can be as flummoxed as the collectors who submitted them.

The difference is that the expertizer can not just be content with identifying what the flaw is; it is important to understand, if at all possible, what caused it.

Unless expertizers can identify the press responsible and how it works, they can be left without the information essential to providing a full explanation.

So, what does an expertizer do when one of these stamps is submitted?

Expertizers used to be able to ask the printer to verify the variety and explain how it happened. When the BEP produced U.S. stamps, it was subject to the provisions of the Freedom of Information Act because it was a government agency. The BEP may not always have been prompt, but it was thorough and helpful.

The same has not been true of the private printers. In fact, it is my understanding that the USPS has instructed them not to answer inquiries from collectors seeking information about varieties.

In a way, this is understandable as providing this information and the testing and research that goes into it can greatly increase the cost of the contracts. The only recourse is to write to the Postal Service’s public affairs office asking for the information that is needed, and the USPS decides what is worth the time and expense to answer. This has been precious little in my experience.

Let’s look at an example of how the BEP would respond to inquiries. Shown nearby are two examples of parallel lines covering the entire stamps, but the lines are more obvious in the selvage.

When I first stumbled upon this effect on the Ponce de Leon issue, I sent the stamps to the BEP for diagnosis.

“In order that the pre-gummed paper, which has a pronounced tendency to curl, might pass smoothly through the sheeter, the printed stamps were fed through a ‘gum-breaker bar’. This part of the press consists of two rollers, one with a series of fine ridges, the other with a meshing series of indentations, between which the paper is passed and its curl removed by the rollers’ manipulation.

“The submitted block of six 20¢ Ponce de Leon postage stamps was examined visually and microscopically under ambient and short-wave ultraviolet illumination. All of the requisite printings including the phosphor tagging were found to be present and intact. As you described in your letter, there appeared over the face of the block you submitted a series of fine, regularly spaced horizontal gray lines. These lines most likely resulted from a buildup of black ink on the ridges of the gum-breaker bar, the pattern of which was then transferred to the face of the printed stamps.”

While I had never before or since had cause to question the BEP’s findings, this explanation did not seem right. I took the extra step of sending the stamps and the Bureau’s letter to George Brett, who was (and remains, though passed on) the greatest student ever of BEP printing operations.

The Bureau allowed Brett unprecedented access to study the presses and the stamps produced because he had built an enviable reputation as a friend of the BEP through his articles in the United States Stamp Society’s monthly journal, The United States Specialist. Over the course of 30-plus years, Brett did a masterful job of explaining the BEP’s operations to the stamp collecting community in these articles.

Brett, it turned out, had found similar lines on other gravure-printed stamps, and additional examples had been reported to him by Ed Kroll.

When Brett did the analysis, he came to a different conclusion than the BEP had suggested. He believed that the lines were what he called “chatter marks,” resulting from slightly variable settings of the doctor blade that wiped excess ink off the face of the gravure plate just prior to printing.

Eventually, Brett wrote about his authoritative findings in a detailed article, “Gravure Chatter Marks,” published in the January 1987 issue of The United States Specialist.

Bottom line: The variety is genuine, and it has an identified cause. Based on the evidence Brett had, there is no doubt that his analysis was correct. This is not to say that the BEP’s explanation is totally off base. It might hold true for other similar-appearing varieties. But for the stamps Brett reviewed, it did not apply.

I have two final things to mention.

First, I am in the process of getting together as many BEP explanation letters as I can find, with the object of making them available on a website at some future time. Since these letters were routinely sent in response to collectors’ questions, they are dispersed throughout the philatelic community. I am asking for anyone with such a letter to provide me with a copy. I can be reached at Box 1125, Falls Church, VA 22041-0125, or by email.

Second, U.S. collectors are missing a great resource if they are not members of the United States Stamp Society. Its monthly journal remains the single best source of detailed articles about U.S. stamps and their production. Membership information is available from the society’s website, or from USSS Executive Secretary, Box 6634, Katy, TX 77491-6634.