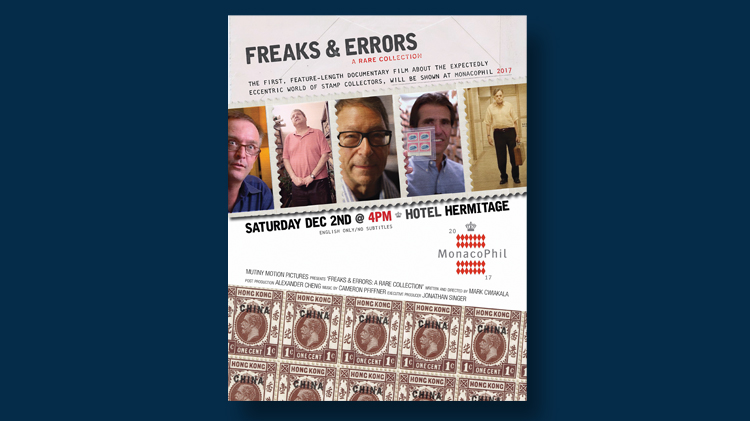 The stamp hobby documentary Freaks & Errors: A Rare Collection, will be shown Dec. 2 at the Hotel Hermitage during the Monacophil 2017 exhibition in Monte Carlo.

A documentary on the world of stamp collecting will be revealed to collectors at a prestigious semiannual stamp show.

Freaks & Errors: A Rare Collection is described as a film “that uncovers the myths and facts of not only stamps, but a lifetime of owners, curators, seekers and admirers.”

The film will premiere Dec. 2 during the Monacophil 2017 exhibition. The viewing will take place from 4 p.m. to 5:30 p.m. at the Hotel Hermitage, Square Beaumarchais, Monte-Carlo, Monaco.

Filmmaker Mark Cwiakala, the movie’s executive creative director, told Linn’s Stamp News that he is now looking to partner with a distributor. He provided Linn’s with the following description of the film.

“There was a time when stamp collecting was an attainable window to the world. A box of stamps would ignite the imagination with images of exotic cultures, native people, art, geography, history, music and literature, as well as a nation’s political climate.

“Stamp collectors, or philatelists, as they’re commonly known, continue to be the curators of these mini time-capsules. In the film, we follow a select group of collectors that at first glance, seem to have only one thing in common, the love of postage stamps. A closer look though, reveals a slew of familiar traits that connects them to each other and uncovers the influence that the hobby has had in defining many aspects of their personal and social lives.

“As we progress through their stories, we unveil a pattern — collecting as the primary vessel for friendship and community-building in a world where modern shifts in work/life dynamics, family structure, digital media and other factors threaten the relevance of all hobbies.”

“In addition to showcasing the lives of these collectors, the stamps have lives of their own.
One of the most famous stamps, the legendary Penny Magenta, a rare stamp with an amazing pedigree and outstanding worth and history has had a profound impact on the personal and financial lives of generations of collectors.

“Recently, the stamp was launched out of traditional philatelic circles and permeated mainstream media with a high-profile sale to an unexpected buyer.

“Though each character’s background differs, the common motives for collecting create an undeniable bond.

“Freaks and Errors: A Rare Collection, is a social commentary on how we all are searching for ways to control our worlds, connect with one another, and express our passions.”

Several short clips from the film have been posted online at YouTube.com and can be accessed easily with a search for “Freaks & Errors” (without quotation marks). Stamp dealer George Holschauer, auctioneer Charles Shreve, author Lawrence Block, actress Jackie Tohn and former National Postal Museum curator Cheryl Ganz are among those who appear in some of those clips.

Additional details can be found online.