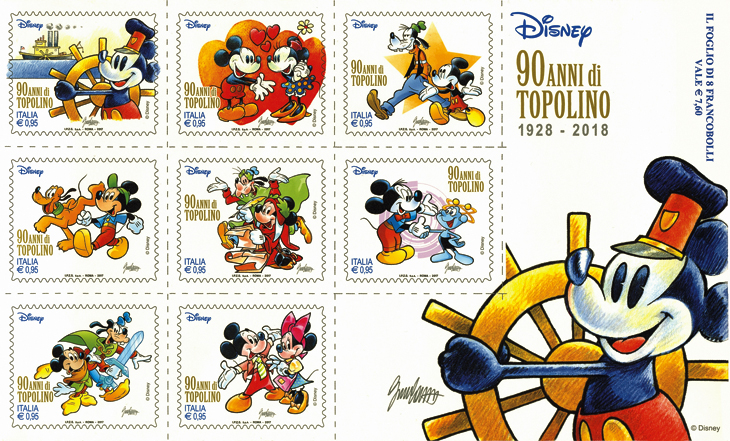 A pane of eight stamps from Italy depicts different versions of Mickey Mouse and some of his friends from 1928 through 2017. 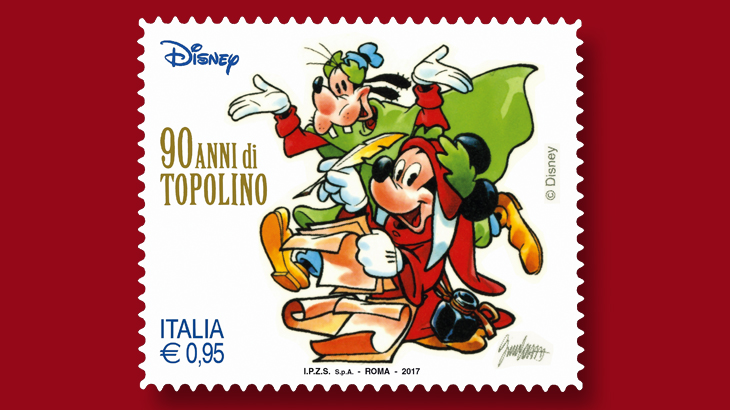 Mickey Mouse, known as Topolino in Italy, made his first appearance on an Italian stamp Nov. 3. The stamp commemorates Mickey Mouse’s 90th birthday, which will occur in next year.
Previous
Next

Forty-seven years after San Marino’s trailblazer set of 10 stamps (Scott 736-745, issued Dec. 22, 1970) depicting Walt Disney’s characters paved the way to endless issues from countries all over the world, Italy has finally decided to fill generational gaps with stamps celebrating the 90th birthday (in 2018) of the world-famous Mickey Mouse.

This is, according to Poste Italiane, a good way to attract youths to stamp collecting.

To ensure that the message reaches the targeted audience, the Nov. 8 edition of Topolino (Mickey Mouse Weekly, founded in 1932) will include a free Mickey Mouse stamp to tempt budding stamp collectors.

At the launch of the Italian Disney stamps in Lucca, the youths in attendance were asked to define philately, but no one apparently responded.

Italy issued its 90th anniversary tribute to the official mascot of the Disney empire Nov. 3. The set includes a single €0.95 stamp produced in sheets of 28, and a pane of eight €0.95 stamps with different designs.

The single stamp depicts a parody of Dante’s masterpiece Divine Comedy with Mickey as Dante and Goofy as the poet Virgil.

Italian sculptor, painter and cartoonist Angelo Bioletto created the drawings for this parody, which appeared in Topolino in 1950.

The work of cartoonist and illustrator Giorgio Cavazzano, the stamps in the pane of eight represent memorable stages in the development of the Mickey Mouse character, and some of them also showcase the work of Italian Disney artists.

The next stamp travels ahead a few years to the 1930s, picturing Mickey in short trousers and Minnie Mouse created by Floyd Gottfredson, followed by Gottfredson’s Mickey and Goofy (initially known as Dippy Dawg) as they appeared in the 1940s, and Mickey and Pluto in the 1950s as drawn by Paul Murry.

The stamp in the center of the pane features the same Divine Comedy design as the single stamp.

Pictured next are Mickey and Atomino Bip Bip created by Romano Scarpa in 1959. Scarpa’s prolific creativity added many popular characters to Topolino, such as Trudy (Peg Leg Pete’s fiancee) and Dickey Duck.

Representing the 1980s is Mickey and Goofy in Sword of Ice, one of the epic series created by Massimo De Vita. Beginning as a staffer of Topolino in the 1960s, De Vita later created comics mini series, such as Time Machine.

The final stamp depicts the 2017 version of Mickey and Minnie Mouse created by Cavazzano, who made his Disney debut in 1967 while a staffer of Topolino in 1967. Starting in 1981, he also worked for the French comics Le Journal de Mickey.

On Dec. 5, 1993, a similar postmark was used in Rome to celebrate 60 years of the weekly Topolino published then by Panini Comics, now by Lucca Comics.