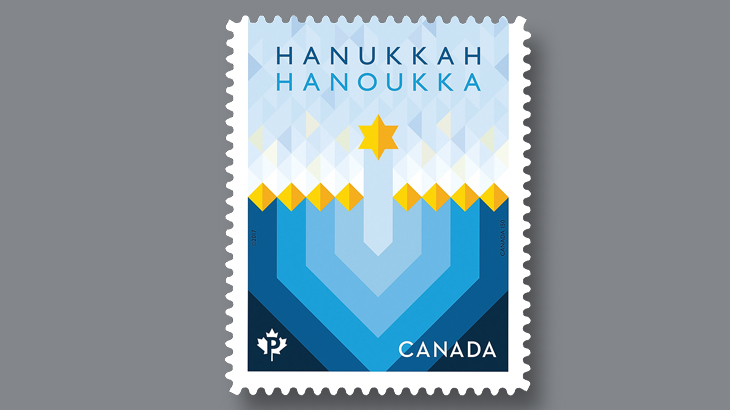 Vibrant and eye-catching, this stylized menorah crowned with a golden Star of David appears on Canada’s first Hanukkah stamp, to be issued Nov. 20 in Montreal, Quebec.

"The planned release date has been moved forward by a week to resolve a design issue with the stamp booklet," said Canada Post spokesman Phil Legault via email just hours before the original issue date. "The stamp will be available for sale online on November 20, 2017 and in post offices later that week. This is an important stamp and we apologize for the delay."

The stylized design in blue and yellow features a menorah with a golden Star of David elevated at the center. The shamash or “helper” candle at this central position is used to light the other eight candles of a Hanukkah menorah, the nine-branched candelabrum that is central to the eight-day Festival of Lights.

This Jewish winter holiday is celebrated with the nightly lighting of the menorah, special prayers, games and fried foods. This year, Hanukkah begins on the night of Tuesday, Dec. 12. and continues through Wednesday, Dec. 20.

A Hebrew word meaning “dedication,” Hanukkah recalls the rededication of the Temple of Jerusalem in 165 B.C. after the priest Judah Maccabee led a successful revolt against the rule of Emperor Antiochus IV of the Seleucid dynasty.

Removing the Greek idols that had profaned the temple, the faithful Jews found they had only one day’s supply of purified oil left to keep the temple menorah burning. According to Jewish tradition, however, the oil kept the lamp lit for eight days, a great miracle and a sign of divine approval.

In the annual Hanukkah celebration, on the first night a single candle is placed in the menorah, with an additional candle added on each successive evening.

By the final night of the Festival of Lights, all eight candles glow brightly, the highlight of a beautiful 2,182-year-old tradition.

Canada’s Hanukkah stamp was designed by Angela Brown Carter of Entro Communications, a 50-year-old firm with offices in Toronto and Calgary in Canada, and Zurich, Switzerland.

The stamps were printed by Lowe-Martin in six-color offset lithography in 300,000 10-stamp tri-fold booklets arranged in two four-stamp panes and one two-stamp pane, for a total of 3 million stamps.

The 12,000 official first-day covers measure 190mm by 112mm. Each has a stylized Star of David pictorial postmark from Montreal, a pattern of pale blue and yellow triangles echoing the colors used on the stamp, and bilingual inscriptions in honor of "THE JEWISH CELEBRATION OF HANUKKAH." These FDCs are available for $1.85 as product no. 414066131.

Along with this Hanukkah stamp, in 2017 Canada Post issued an Eid stamp on May 24 to mark the Muslim holy days of Eid al-Fitr and Eid al-Adha; and its first joint issue with India on Sept. 21 for another Festival of Lights, Diwali, which is observed annually by Hindus, Sikhs, Buddhists and Jains.