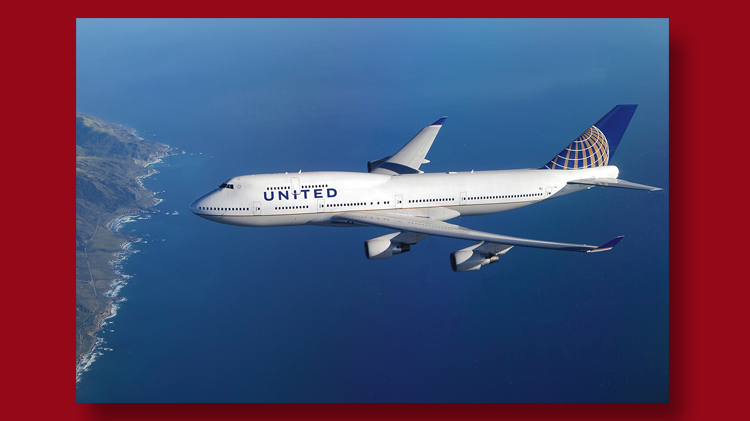 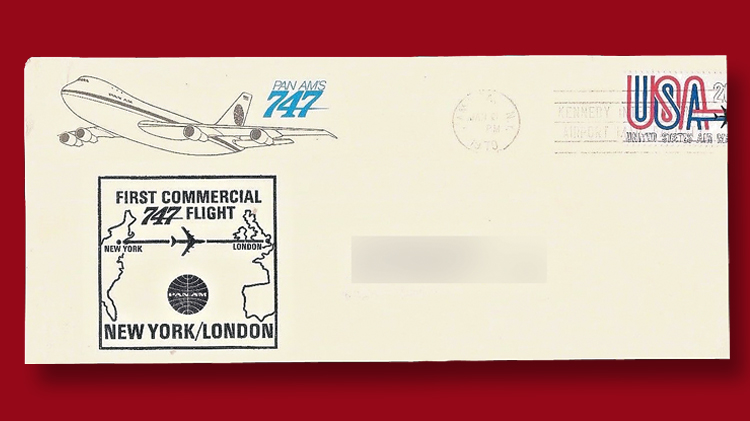 Flight cover carried on the first commercial flight of the Boeing 747 via Pan American World Airways from New York City to London, England.
Previous
Next

That article sparked a whirlwind of memories, from philately to my own experiences flying on that wide-body commercial jet.

I’ve always been captivated by seeing 747s take off at airports. United describes the plane’s large size as follows: “At 231 feet, 10 inches from nose to tail, the 747-400 is roughly as long as five humpback whales end-to-end.”

In 2007 I flew from Japan to Guam via Northwest Airlines on a modified version of the 747 that had additional cargo capacity. I had similar experiences of flying on 747s via Continental Airlines and United Airlines on different international trips.

Returning to the philatelic side, I’ve been picking up the occasional first-flight cover for my collection and stumbled across the Pan American World Airways 747 cover shown here. Pan Am was the first airline to fly this plane commercially. The flight departed Jan. 21, 1970, and traveled from New York to London. The cover is postmarked in New York City at the Kennedy International Airmail Facility and is franked with a 1968 20¢ USA and Jet airmail stamp (Scott C75).

The envelope’s cachet features a line drawing of the jet, and a map showing New York and London with an airplane silhouette in between and the Pan Am logo below.

The back of the envelope has a London pictorial machine cancel specifically referencing the flight. The cancel reads, “Pan Am Inaugural Flight, Boeing 747, New York to London.”

United made its first 747 commercial flight, from San Francisco to Honolulu, later that same year, on July 23, 1970.

Needless to say, I enjoy flying. With the celebration of 100 years of U.S. airmail taking place in 2018, I know I’ll be on the lookout for some new items to add to my collection, and I encourage you to do the same.

Life as contemplated via postage stamps