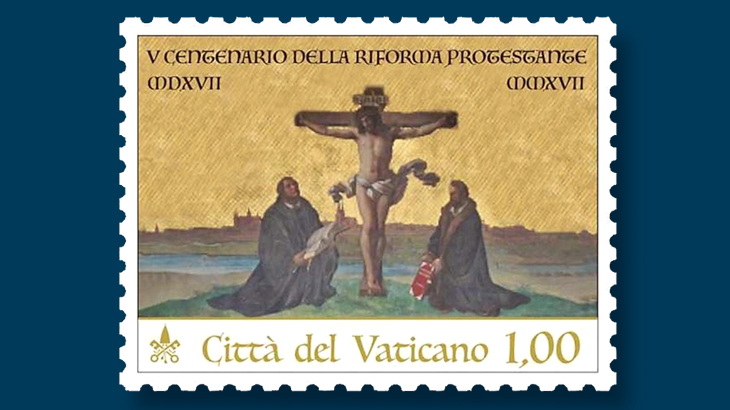 The Vatican City will issue its 500th anniversary of the Protestant Reformation commemorative stamp Nov. 23.

The Vatican City will issue its commemorative stamp marking the 500th anniversary of the Protestant Reformation Nov. 23.

The stamp was listed on the Vatican City’s 2017 program announced several months ago, but the design wasn’t revealed until Oct. 31, the anniversary date of Martin Luther nailing 95 theses to the door of the Castle Church in Wittenberg, Germany, which is considered the start of the Reformation.

The new-issue announcement from the Vatican City philatelic and numismatic office described the design of the €1 stamp as depicting Jesus crucified in the foreground and a “golden and timeless view of the city of Wittenberg” in the background.

The announcement provided more details about the design: “With a penitential disposition, kneeling respectively on the left and right of the cross, Martin Luther holds the Bible, source and destination of his doctrine, while Philipp Melanchthon, theologian and friend of Martin Luther, one of the main protagonists of the reform, holds in hand the Augsburg Confession (Confessio Augustana), the first official public presentation of the principles of protestantism written by him.”

Cartor, a security printer in France, printed the commemorative stamp in sheets of 10. The total printing was 120,000 stamps.

Pope Francis visited Sweden in October 2016 for the Joint Catholic-Lutheran Commemoration of the Reformation. During the visit, the pope signed the joint statement, which says in part: “Fifty years of sustained and fruitful ecumenical dialogue between Catholics and Lutherans have helped us to overcome many differences, and have deepened our mutual understanding and trust. At the same time, we have drawn closer to one another through joint service to our neighbours — often in circumstances of suffering and persecution. Through dialogue an­d shared witness we are no longer strangers. Rather, we have learned that what unites us is greater than what divides us.”

For more information on the Vatican City’s Protestant Reformation stamp, visit its website, send an email to order.ufn@sca.va, or write to the Philatelic and Numismatic Office, Governatorato, 00120 Vatican City.