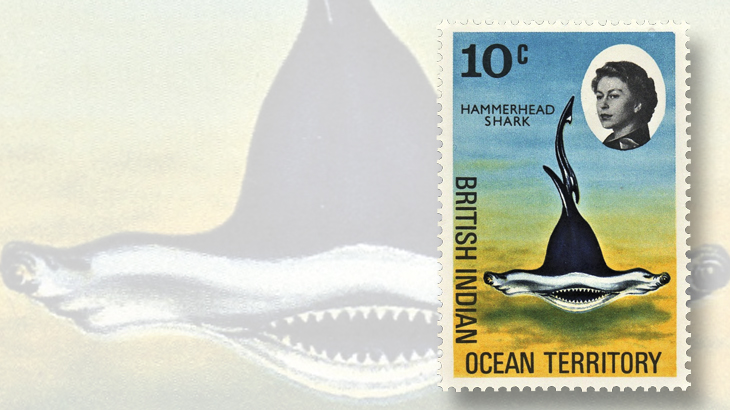 One of the British Indian Ocean Territory’s first set of stamps with its own name, in 1968, featured a hammerhead shark (Scott 17).

The Nov. 6 issue of Linn’s Stamp News just landed on the presses and goes in the mail to subscribers Monday, Oct. 23. Here we entice you with a few previews of exclusive content available only to subscribers. And if you subscribe to Linn’s digital edition, you’re at the head of the line because you get early access Saturday, Oct. 21. To heighten your anticipation even further, we offer three glimpses of what lies between the covers of this issue.

Looking to dive into a new area? Stamp Collecting Basics columnist Janet Klug explores an interesting country that has issued stamps that fit even a modest collecting budget.

Author William B. Hughes explores a cover in his collection that serves as a window into the early history of the United States postal system. The  “ford to Kansas 5” marking on the cover helps tell the story.

Concerns of war and farming in a misdirected letter between brothers

Author Paul Albright notes that the close examination of a cover from his collection, and its contents, was prompted by the numerous auxiliary or ancillary markings that it contains.