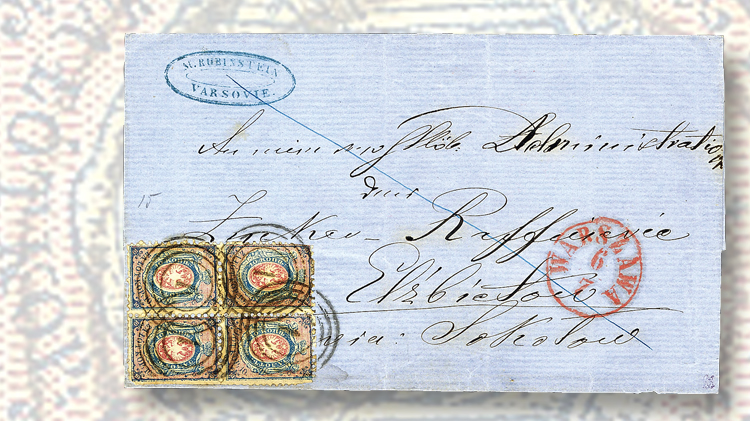 This cover, to be auctioned Nov. 1-2, is described by Cherrystone as the only one known franked with a block of four of Poland’s 1860 10-kopeck first stamp. 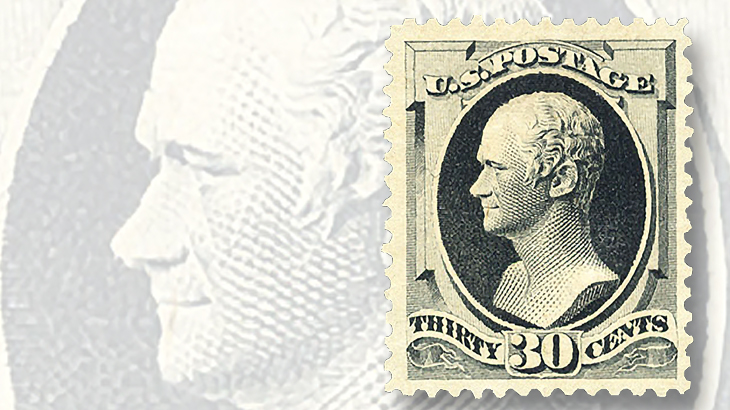 This rare example of the 1880 30¢ greenish black Alexander Hamilton special printing will be offered during the Nov. 1-2 Cherrystone auction.
Previous
Next

Cherrystone Philatelic Auctioneers of New York City will present its next sale of worldwide rare stamps and postal history, along with large lots and collections, Nov. 1-2.

The auction begins Wednesday morning with stamps of the United States 1847 issue and a selection of other U.S. classic stamps and proofs.

One standout from this group is an unused example of the 30¢ greenish black Alexander Hamilton stamp from the 1880 American Bank Note Co. special printing (Scott 201).

Cherrystone describes the stamp on offer as “certainly among the finest in existence,” and “unused without gum as issued, exceptionally well centered with wide margins, fully intact perforations on all sides, deep rich color.”

The stamp is one of 44 certified as genuine, according to the Siegel census cited by Cherrystone, of which 16 have faults.

Cherrystone lists an opening bid of $19,000 against the $23,000 value in the 2017 Scott Specialized Catalogue of United States Stamps and Covers.

The stamp has been certified by Professional Stamp Experts (1992) and the Philatelic Foundation (2004).

A modern U.S. rarity that turned up more than a century later is the block of four of the 1979 $1 Candleholder invert error (Scott 1610c), also known as the CIA invert because of its 1985 discovery by employees of the spy agency.

The worldwide material brings together properties of various owners and estates, with items from Europe, South America and Asia, plus Great Britain and the British Commonwealth.

A 1969 common design stamp commemorating the first flight of the prototype Concorde supersonic plane was issued by France and several of its possessions, including French Southern and Antarctic Territory, which sold an 85-franc stamp after printing (but not issuing) an 87fr stamp of the same design.

One mint single of the unissued 87fr Concorde stamp is offered by Cherrystone with a $3,250 opening. Though not listed by Scott, the variety is described in a catalog footnote.

Featured among the postal history offerings is an 1860 cover from Poland franked with a block of four of the country’s first stamp, the 10-kopeck blue and rose Coat of Arms.

Although the stamp block was scissor cut, resulting in clipped and trimmed perforations, Cherrystone points out it is the only known cover franked with a block of four of the country’s first stamp, calling it one of the top rarities of Polish philately.

The 1,032 lots in this Cherrystone auction also include various dedicated country and worldwide collections.