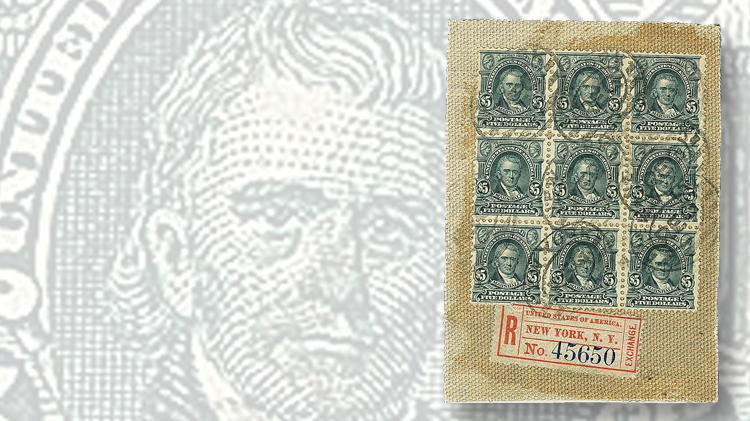 The largest known multiple of the 1903 $5 dark green John Marshall is found on a canvas piece and tied with multiple oval registry cancels. The rare item will be offered during the Oct. 24-26 auction by Robert A. Siegel in New York City. 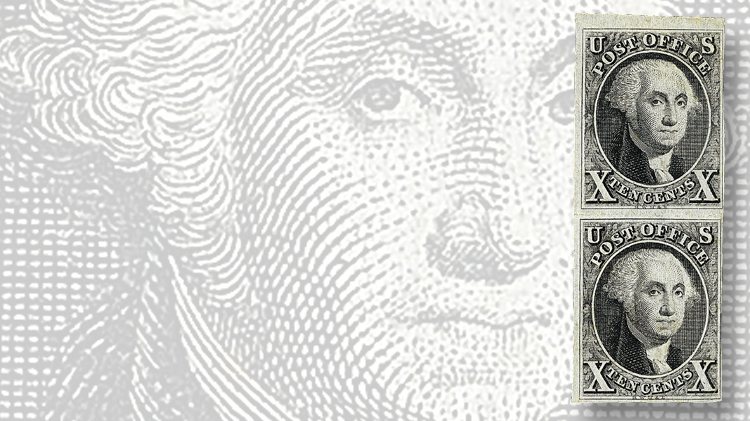 The Oct. 24-26 Siegel auction of U.S. stamps includes a rare unused vertical pair of the 1847 10¢ George Washington with original gum.
Previous
Next

Classic United States stamps are featured in the three-day sale on tap from Robert A. Siegel Auction Galleries in New York City.

The auction scheduled for Oct. 24-26 will open Tuesday morning with two sessions devoted to classic issues from the U.S. Bureau of Engraving and Printing, including proofs, essays, and postal history — as assembled in respective collections by Irvin Heimburger and Roger Brody.

“Roger Brody’s fascination with the 1902-03 Second Bureau Issue has never waned, even after the sale of his first collection of these stamps. In his second effort, he has amassed some magnificent essays, multiples and dollar-denomination covers.”

The Brody material includes remarkable rarities that highlighted his award-winning exhibit of the series 1902 issues.

One example is the largest recorded multiple of the 1903 $5 dark green John Marshall stamp (Scott 313), as a used symmetrical block of nine (3 by 3). The stamps are tied to a canvas piece by multiple strikes of New York registry oval postmarks. Just below the stamps, a New York registry label is affixed, partially over the perforations of one stamp.

“Used blocks of the $5 1902 Issue are very rare — much rarer in fact than unused blocks,” the Siegel catalog description explains. “This block of nine is in another class and was used on a heavy registered package (weighed more than 28 pounds).”

Siegel describes the stamps in the block as having nice centering and deep rich color. The listing cites a calculated Scott catalog value of $8,500 for this lot but notes that figure “does not remotely convey the rarity of this multiple.”

Another rarity on offer is a single used 4¢ brown Ulysses S. Grant coil stamp created from the imperforate stamp (Scott 314A), one of a total of 42 used stamps known.

Siegel breaks down the census as 32 used singles (two on piece), a used strip of three, a used pair, and three covers (one of which bears a strip of three).

All of the imperforate stamps in this issue were cut into coils and perforated with the rectangular type III perforations of the Schermack Mailing Machine Co. in Detroit.

The 4¢ stamp is listed with the 2017 Scott catalog value of $52,500, a figure that appears in the catalog in italics to signify an item that can be difficult to value accurately.

The earlier lots of the 1894 First Bureau issues open with essays and proofs before the issued stamps are presented.

Essays and proofs are also presented with stamps and postal history of the 1898 Trans-Mississippi issue (Scott 285-293), and with the 1901 Pan-American Exposition issue that follows (294-299).

The Pan-American postal history in this sale includes a 1¢ stamp on a May 1, 1901, first-day cover mailed from Lawrence, Kan., and a 2¢ stamp tied to a corner-card cover with a May 1 first-day machine cancel from Chicago.

The final 10 lots of the 294 in this first catalog are group lots offering the balance of the Heimburger and Brody exhibit collections, including Spanish-American War patriotic covers, and 1902-03 plate, ink, and perforation varieties.

The first session drawn from the second of the two Siegel catalogs is scheduled to begin Tuesday at 3:30 p.m. with dozens of classic U.S. essay and proof lots, and a selection of specimen overprints.

Early among the U.S. postage listings is an unused, original gum vertical pair of the 1847 10¢ black George Washington stamp (Scott 2).

“To underscore the rarity of any original-gum multiple of the 10¢ 1847, there are only three unused blocks recorded (two with original gum), one of which is contained in the Hirzel collection at the Swiss PTT Museum,” Siegel notes. “Only four pairs and a strip of three could be located in our computerized sale records using Power Search.”

This example is described as having large to huge margins at left and top, full at bottom and just clear of framelines at right, with an intense shade. A light vertical crease between the stamps “does not affect the design of either” according to Siegel, and there are other tiny flaws that are “nearly undetectable.”

This unused pair is accompanied by a 2016 PSE certificate, and listed with the $80,000 Scott catalog value for a pair.

The session continues with a wide range of the country’s earliest issues, including numerous 1¢ blue Franklin stamps from the imperforate 1851-56 issue, and varieties of the 10¢ green Washington.

The latter stamp is described by Siegel as “one of the finest recorded examples of the 2¢ Pan-American invert with original gum.”

Some fantastic 20th-century coils are offered in this sale, including a rare guideline pair of the 1909 10¢ yellow George Washington horizontal coil (Scott 356), with “brilliant color” and “well-balanced margins.”

The value of the unused guideline pair in the 2017 Scott Specialized Catalogue of United States Stamps and Covers is $16,000 (in italics). This pair was certified by the Philatelic Foundation in 1969.

And a popular U.S. coil rarity follows soon after in the form of a used 1911 3¢ deep violet Washington coil single, a stamp commonly known as the Orangeburg coil (Scott 389).

This scarce stamp was made for Bell Pharmaceutical Co., which used it to send product samples to physicians in packages mailed out of Orangeburg, N.Y.

Surviving used examples often suffer from some fault, but Siegel describes the single stamp in this auction as a “sound copy … far nicer than most.”

The Scott catalog value of $10,000 is listed by Siegel, and the stamp has a 2017 Philatelic Foundation certificate.

The auction catalog can be viewed online at siegelauctions.com, with a PDF version also available for downloading or viewing.

Online bidding options are available on the Siegel website, or via StampAuctionNetwork.com.