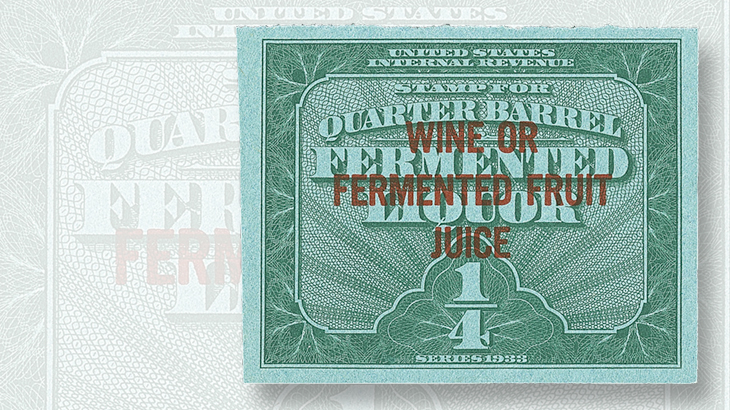 The unique unused ¼-barrel fermented fruit juice stamp offered in the Siegel sale of the Grant Inman collection sold for $41,300. 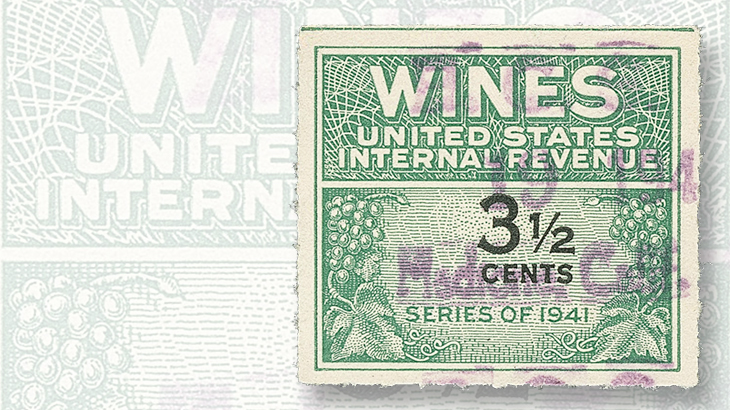 This used 3½¢ wine stamp from the Grant Inman collection of U.S. revenues crossed the Siegel auction block for $16,520. 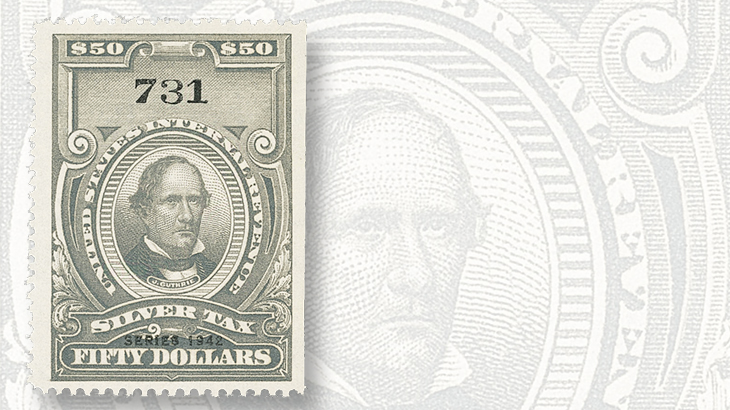 In 1942 the silver tax stamps were reissued with a “Series 1942” overprint. The scarcest of these is the $50 stamp, with only three examples known. This example, from the Grant Inman collection, realized $34,220 at the Siegel sale. 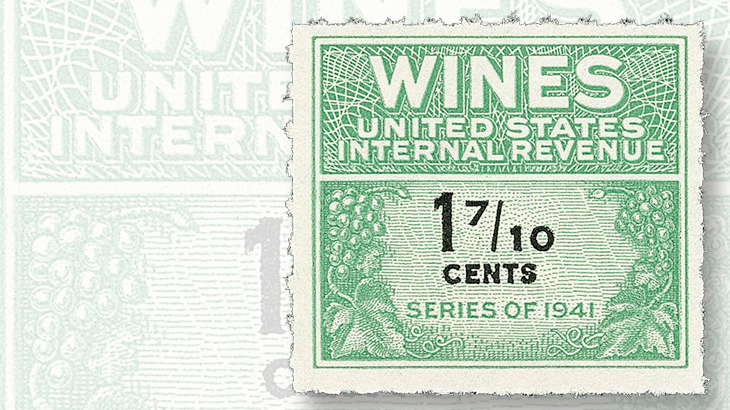 This 1942 17/10¢ wine stamp in the Inman U.S. revenue collection exchanged hands at the Sept. 20 Siegel auction for $25,960. Discovered in the 2005 Smithsonian National Postal Museum deaccession, only three unused examples of the stamp are known. 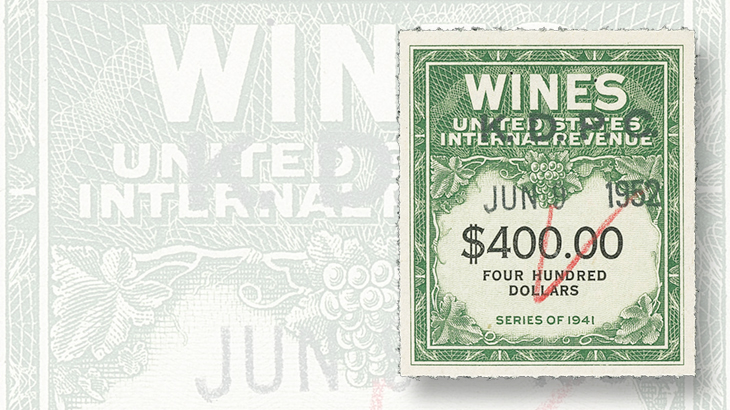 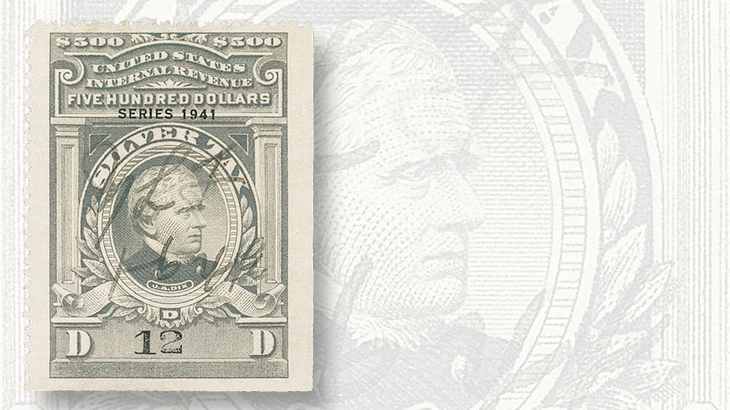 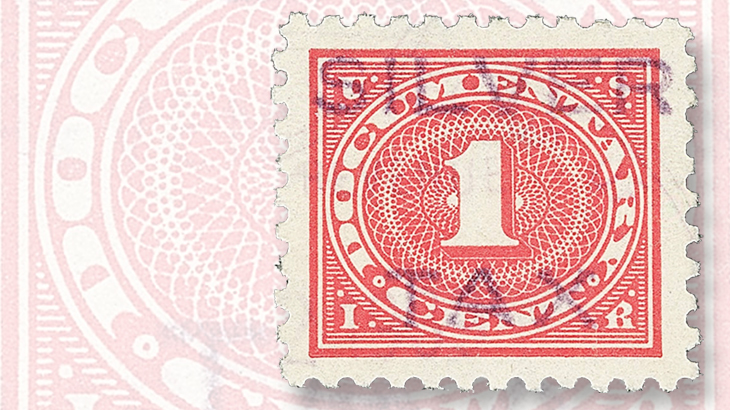 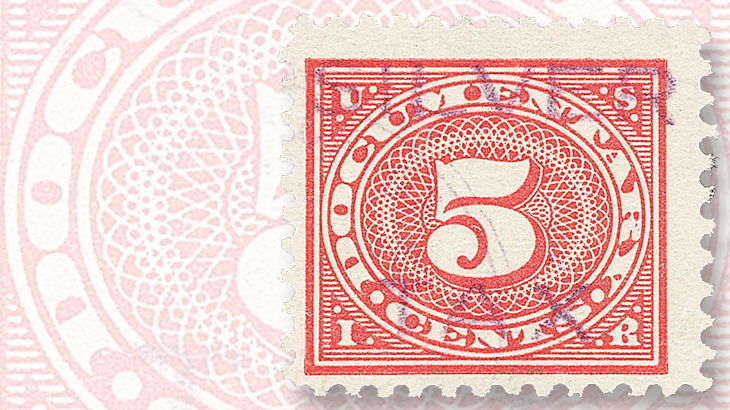 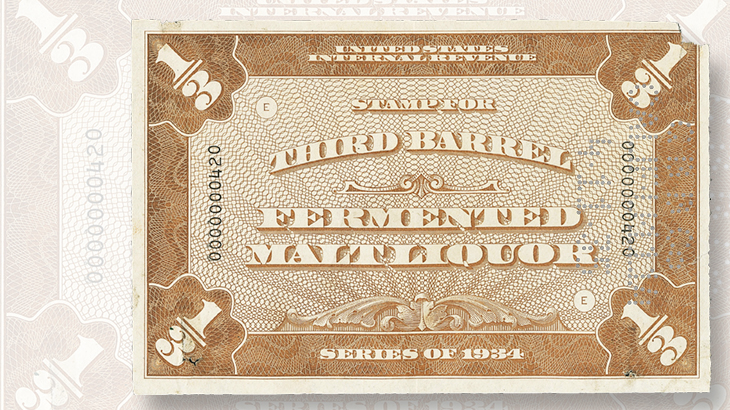 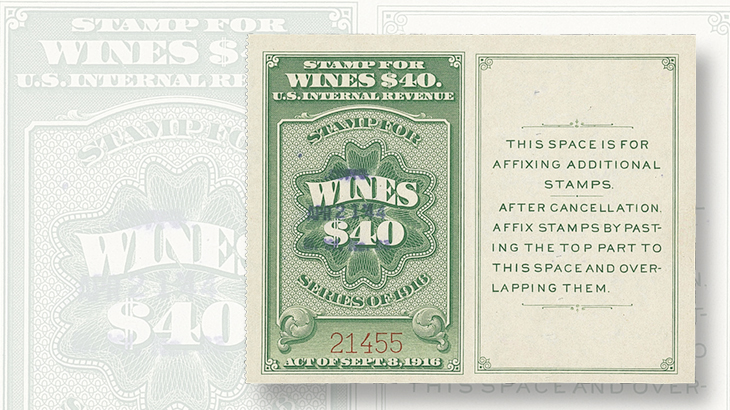 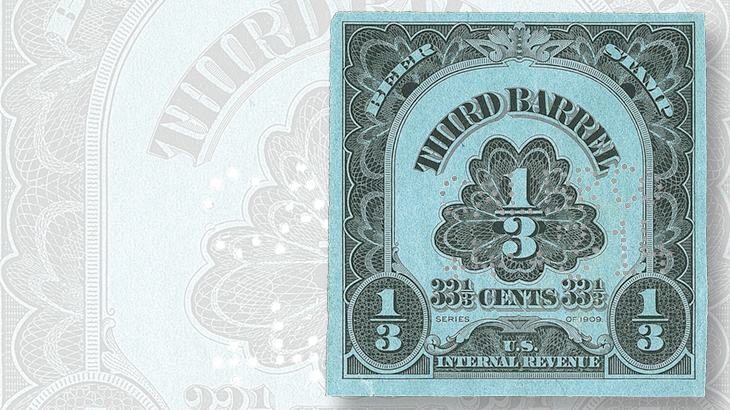 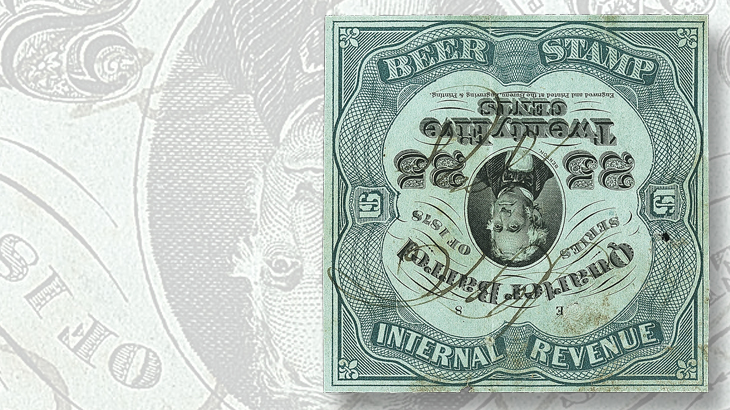 Thomas “Old Bullion” Benton, a senator from the state of Missouri, is pictured standing on his head in the series 1878 25¢ beer stamp with inverted center. This unique stamp went to a new home for $67,850 at the Siegel sale. 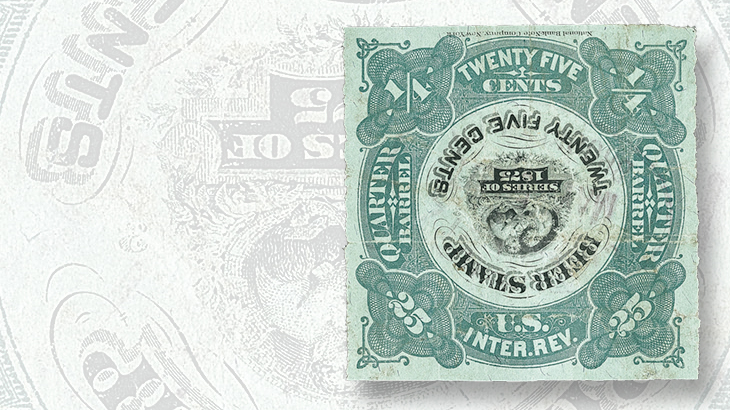 Although the United States philatelic auction scene was somewhat slow this past month, the sixth installment of the impressive Grant Inman collection of U.S. revenues — featuring some of the rarest and most sought-after wine, beer, and silver tax stamps — came to the auction block Sept. 20 at Robert A. Siegel Auction Galleries in New York City.

This time his stellar collection of U.S. revenues is being sold by Siegel at public auction in seven installments.

On Sept 8, 1916, Congress passed a law that required revenue stamps to be affixed to the outer cases of wine or cordials, rather than upon each individual bottle.

This came with a stipulation that the taxes were levied when the wine left a bonded storage facility, such as a customs house or winery, rather than upon the retail sale of the wine. Greater denominations needed to be applied at one time.

To allow room for this, booklets of wine stamps were produced. They were issued in booklets of $400 regardless of the denominations of the stamps. Each stamp was perforated on the left and bore a label, called a tablet, on the right. An inscription on the tablet reads, “This space is for affixing additional stamps. After cancellation, affix stamps by pasting the top part to this space and overlapping them.”

On the left, the tab that remained in the booklet bore the serial number of the stamp and six lines to record information about the stamp’s use. When Prohibition began in 1920, these stamps continued to be used for religious and medicinal purposes.

In 1933, when the 18th Amendment was repealed by the 21st Amendment and Prohibition ended, new stamps needed to be printed.

A 1934 reprint of the $40 wine stamp with tablet (Scott RE107B) sold in Siegel’s Grant Inman sale for $13,570, including the 18 percent buyer’s premium Siegel adds to all lots. This realization is noticeably more than the 2018 Scott Specialized Catalog of United States Stamps and Covers value of $9,000.

The year 1933 was an important one for wine stamp collectors. In April of that year, when Prohibition was coming to a close, Congress changed the legal definition of intoxicating beverages to 3.2 percent ABV (alcohol by volume), from 0.5 percent ABV previously.

The overprint was applied to the ¼-barrel, ½-barrel, and 1-barrel beer stamps of the time. Unfortunately, no known examples of the ½-barrel or 1-barrel overprinted stamps exist.

The unique unused ¼-barrel fermented fruit juice stamp (Scott REF10) offered in the Siegel sale sold for $41,300. Its status no doubt contributed to the handsome realization, which handily eclipsed the 2018 Scott Specialized catalog value of $30,000.

As the 1930s progressed, more wine revenue stamps were issued. These were smaller than the wine stamps from booklets. While technically they could be used on the tablet of a wine stamp booklet, no such examples are known.

Some of the scarcest wine stamps that were only known used became available in unused condition when the Smithsonian National Postal Museum deaccessioned its archive in 2005.

The Grant Inman collection features some of the finest and rarest of these wine stamps in existence.

A very fine used example of the series 1941 3½¢ green and black (Scott RE114) was among the gems offered in the Siegel auction.

The Internal Revenue Department only received one delivery of the stamps. As such, this was a very limited run of stamps, in use for a short period, for a specialized rate. No new examples surfaced during the Smithsonian’s deaccession.

Also up for bids was a series 1942 $400 yellow green and black stamp (Scott RE165B), one of only four used examples known. Six unused examples also surfaced as part of the Smithsonian’s deaccession. Against a Scott catalog value of $14,000, the stamp realized $18,880.

The 1942 wine stamp series is one of the largest series in U.S. philately, with 104 denominations. Some of these are the most esoteric values possibly seen on U.S. stamps.

The unused 17/10¢ wine stamp (RE182F) in the Inman collection exchanged hands for $25,960. All three recorded unused examples of Scott RE182F were discovered in the Smithsonian National Postal Museum deaccession. Two others exist used.

Similar to the wine stamps, beer stamps were used to pay excise taxes on beer.

Egypt was the earliest recorded civilization to impose a tax on beer. Queen Cleopatra VII imposed a heavy tax on beer toward the end of her reign to fund her war with Rome, although she claimed it was to discourage drunkenness.

At the time, beer was the most consumed beverage in Egypt. Her popularity waned overnight.

All serious beer aficionados are familiar with the Bavarian Purity Law of 1516, which states that only barley malt, hops, yeast and water may be used in the production of beer. Defining what beer is allowed Germans of the time to tax beer effectively.

A beer tax was first levied at the federal level in the United States by President Abraham Lincoln to help fund the Civil War. This federal excise tax was imposed July 1, 1862, but it was not until July 13, 1866, that stamps were required as proof of tax payment.

The first stamps were printed by the Treasury Department. When they were first issued, the tax rate was $1 per barrel. At the time, a barrel held approximately 31 gallons of beer.

In 1871 beer stamps began being produced in two colors. Each color was printed separately.

The frames were printed by the National Bank Note Co., the same company that held the postage stamp printing contract. The stamps were then delivered to the Bureau of Engraving and Printing, where the centers (vignettes) were printed in a different color.

This proved cumbersome, and the next issue was printed entirely by the National Bank Note Co. in 1875.

At this point, the postage stamp contract had passed to the Continental Bank Note Co., but National continued to be involved in the production of a few revenue stamps.

With the complication of two companies producing beer stamps, it is almost surprising that no center inversions are known to have occurred. It was not until the 1875 issue that center inversions were discovered.

Only three beer stamps exist as center inverts (Scott REA32a, REA36a and REA39a), and only one example of each exists. Inman had two of them (REA32a and REA39a) in his collection.

The first two are from the 1875 series, picturing Bacchus serving man the first beer. The third is from the 1878 series depicting notable politicians. This 25¢ stamp (Scott REA39a) illustrates Thomas “Old Bullion” Benton, a senator from the state of Missouri and the first member to serve five terms in the Senate.

The first recorded owner of the series 1875 25¢ beer stamp with an inverted center (Scott REA32a) was Edgar L. Green of Philadelphia.

Siegel’s lot description for the stamp provides some instructive history: “[Edgar Green’s] advertisements seeking Medicine and Perfumery stamps appeared as early as 1906 in druggist’s publications, such as Practical Druggist and Spatula, alongside help-wanted ads. Green’s collection was purchased by noted dealer Philip H. Ward around 1930 and was part of Ward’s estate when he died in 1963. Ward’s stock, including this stamp, was bought from the estate by the Weill Brothers of New Orleans. The late Robert H. Cunliffe purchased this rarity from the Weills and owned it for several decades. Cunliffe’s Invert collection was sold after his death by Spink Shreves in 2009. Therefore, this is only the second time this important rarity has made an auction appearance since its discovery more than a century ago.”

This unique beer stamp, with small thins and a small sealed tear, brought $56,050.

The series 1878 25¢ beer stamp with inverted center (Scott REA39a) was not discovered until much later. The first record of this stamp comes from prominent philatelist Henry Holcombe.

The date of discovery is unknown, but Holcombe was active in the 1930s through 1950s.

After Holcombe, its provenance is very similar to that of its series 1875 invert brother.

This spectacular rarity — with several faults common to beer stamps (thins, a crease and two small holes) — found a new home for $67,850.

When the Great Depression hit in 1929, the public lost confidence in the banks. This sparked widespread buying and hoarding of gold bullion.

To stabilize the economy and prevent runs on banks, the gold standard was abolished in 1933. All investment-quality gold bullion and coins in private hands not being used for artistic or industrial purposes was required to be sent to the U.S. Treasury.

To prevent hoarding of silver bullion, the Silver Purchase Act was established in 1934, which required all investment grade silver to be sent to the Treasury within a 90-day period, to be reimbursed by the Secretary of the Treasury. This act also required that all profit from the sale of silver be taxed at a rate 50 percent.

Silver tax stamps were authorized by Congress June 19, 1934, to be placed on transfer memoranda for payment of the new federal silver tax.

All of these silver tax stamps with handstamped overprints appeared in the Grant Inman collection. The unique 1939 1¢ silver tax stamp (Scott RG28), with extremely fine centering, sold for $21,830. The 5¢ stamp of the same issue (Scott RG30), also unique, sold for $20,650.

In 1941, the first dedicated silver tax stamps were issued. With designs mirroring the documentary stamps of 1940, each stamp depicts the head of a former secretary of the treasury and is overprinted “Series 1941.”

Want to read the rest of our U.S. Auction Roundup?

In addition to the Siegel Grant Inman collection, Tim Hodge breaks down the Clipper City collection, which was also presented by the Siegel firm. Subscribe to Linn’s Stamp News to read all about it!