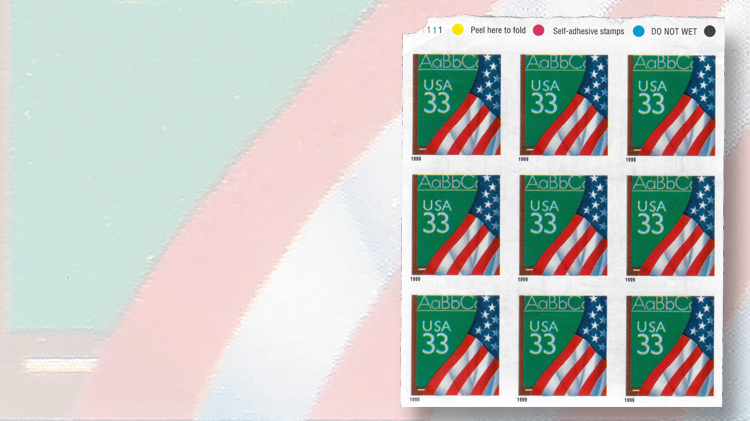 From an ATM pane of 18 issued in 1999, this block of nine 33¢ Flag and Chalkboard stamps is missing the die cuts that normally separate the individual stamps. The authenticated error was previously unreported.

A previously unreported die-cut-missing error on a United States stamp issued nearly two decades ago has come to light.

Chris Lazar recently notified the Scott catalog editors that he discovered a block of nine of the 33¢ Flag and Chalkboard stamp that is imperforate — missing all of the normal serpentine die cuts that separate the individual stamps.

The stamp (Scott 3283) was issued March 13, 1999, exclusively in a flat pane of 18 designed to be dispensed through automatic teller machines. The 2018 Scott Specialized Catalogue of United States Stamps and Covers does not list any error variety of the stamp.

Lazar told Linn’s Stamp News that the block came into his possession as part of a larger lot of worldwide and U.S. material that he purchased years ago.

When he realized the die cuts are missing from the block, he set it aside to look at in the future.

“Every once in a while I would browse around online to look for any others that might have been found, or ask the occasional U.S. dealer if they have ever come across one,” Lazar said.

In late July or early August of this year, he submitted the block to the American Philatelic Expertizing Service, and it was returned to him in September.

The expertizing certificate dated Sept. 21, 2017, identifies the block as “United States, Scott No. 3283 half pane, imperf block of 9, unused, on original backing, genuine in all respects.”

The block was neatly torn from the full pane along the top of the pane’s single horizontal peel strip (which also has no die cuts). Part of tear angles through the letter “V” in the plate number “V1111,” but does not reach any stamp.

“So somewhere out there is the other half of the booklet,” Lazar speculated. “Was it used as postage, or did the original owner think it was a defective stamp and toss it out when trying to separate a single stamp from the booklet?”

The stamps were printed and processed by Avery Dennison of Clinton, S.C., a contracting security printer for the Postal Service at that time.

Scott catalog editor emeritus James E. Kloetzel told Linn’s that the first listing of the new error would be in Vol. 1A of the 2019 Scott Standard Postage Stamp Catalogue, scheduled for release in April 2018.

Veterans can be honored through collecting postal history

All the ways you can buy the new U.S. Flag stamp