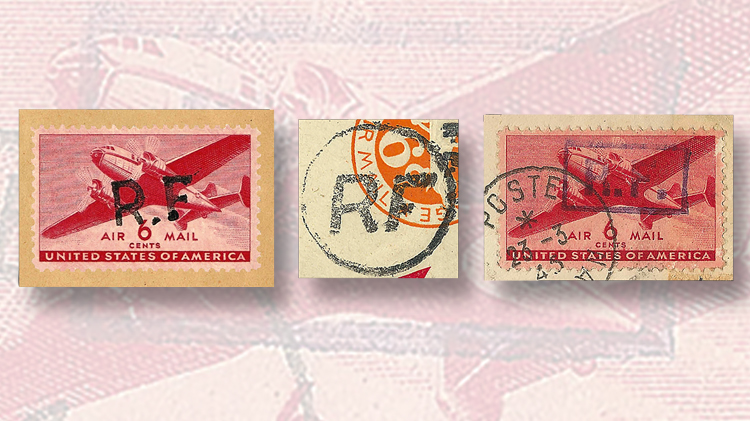 The known genuine R.F. overprints are shown here from the Scott Specialized Catalogue of United States Stamps and Covers. Others have been reported, but their validity is doubtful. 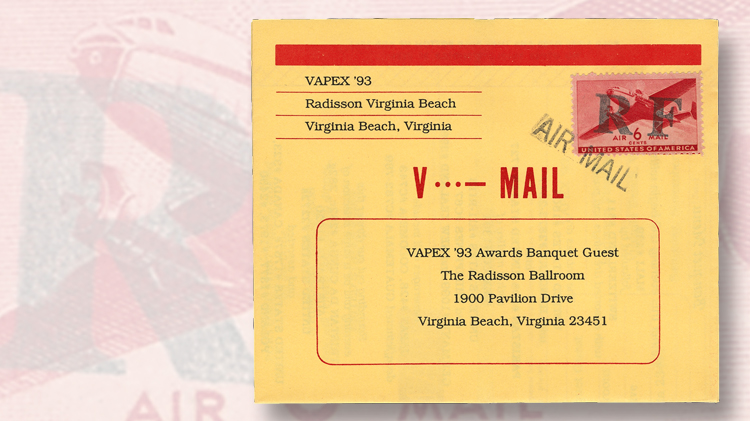 A fake R.F. overprint on a faux V-Mail form was created as a banquet souvenir for the Vapex 93 stamp show. The banquet program and menu are inside. Information on how to obtain one of 12 free copies of this souvenir sheet can be found in the column. 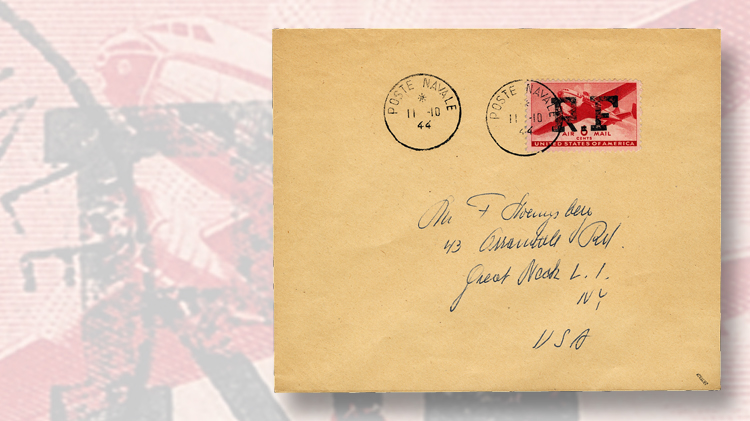 The APEX expertizing certificate for this cover reads, “a bogus cover stamp tied with a fake cancellation.” The certificate does not address the R.F. overprint itself, but I believe it to be fake as well.
Previous
Next

One of the more elusive categories of United States World War II material is R.F. overprints on contemporary airmail stamps and stamped envelopes.

Counterfeits are not hard to find, but the genuine article is a philatelic prize — especially on cover.

These overprints are listed in the Scott Specialized Catalogue of United States Stamps and Covers with the following introduction:

“Authorized as a control mark by the United States Fleet Post Office during 1944-45 for the accommodation of and exclusive use by French naval personnel on airmail correspondence to the United States and Canada. All ‘R.F.’ (Republique Francaise) mail had to be posted on board French ships at one of their western Mediterranean or northwest African naval bases and had to bear the return address, rank and/or serial number of a French officer or seaman. It also had to be reviewed by a sensor.

“All ‘R.F.’ overprints were handstamped by the French naval authorities after the stamps were affixed for mailing. The stamps had to be canceled by a special French naval cancellation. The status of unused stamps seems questionable; they are alleged to have been handstamped at a later date.”

Three types of the R.F. overprints are illustrated in the Scott U.S. Specialized catalog. The final sentence in the catalog introduction states, “Several types of ‘R.F.’’ overprints other than those illustrated are known, but their validity is doubtful.”

Some of the counterfeits are quite good, so expert certificates are essential.

I have an impressive collection of fakes, including examples on cover. The cover shown nearby was certified by the American Philatelic Expertizing Service (APEX) as fake in 2002.

Linn’s reader A. Don Jones used R.F. fakes as the philatelic focus of a souvenir of the Virginia Philatelic Federation’s Vapex stamp exhibition 1993 awards banquet. The souvenir was created to mimic a V-mail form.

Both the banquet program and menu are inside.

Courtesy of Jones, I have 12 examples of this banquet souvenir and would be happy to give them away to Linn’s readers who send a request by email, or by mail to John M. Hotchner, Box 1125, Falls Church, Virginia 22041-0125.

If there are more than 12 requests, I will put them in a hat and pick 12 winners. Requests must reach me by Oct. 30.