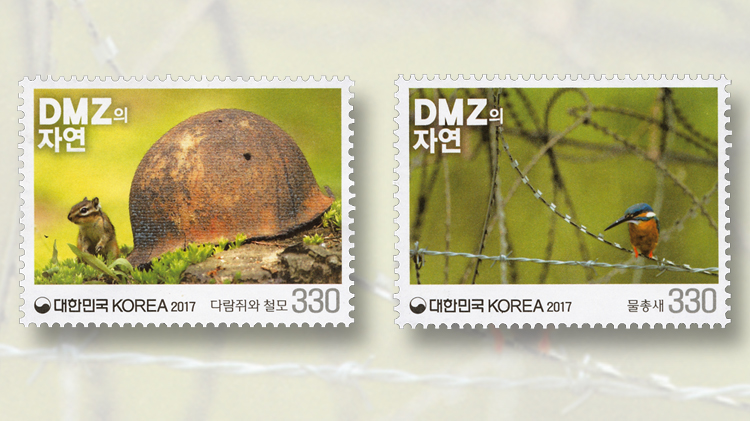 The second set of stamps in South Korea’s Nature in the DMZ series was issued June 5. The designs feature the winning entries in a photography contest.

In June, South Korea issued its second set of stamps highlighting nature found in the demilitarized zone along the North Korean border, known as the DMZ.

One shows a Japanese tit (Parus minor) walking on barbed wire with a red and yellow triangular “mine” sign hanging from it.

The other stamp depicts a group of black-faced spoonbills (Platalea minor).

The stamps are se-tenant (side-by-side) in a sheet of 20. The selvage at the top of the sheet shows symbolic barbed wire in green with a single leaf. Also included are inscriptions in Korean and English identifying the sheet as the first issue in the Nature in DMZ series.

The series continued this year, with a se-tenant pair of 330w stamps issued June 5 in a sheet of 20. Again, one stamp features a bird and barbed wire. This time, it is a common kingfisher (Alcedo atthis) sitting on a strand of the barbed wire.

Korea Post describes the other design as showing a helmet and a “squirrel,” but the small, striped rodent depicted is commonly called a “chipmunk” in the United States.

The photographs reproduced on all four stamps were winners of the beautiful nature of the DMZ photo contest sponsored by the Ministry of Environment.

Korea Post reported that the purpose of the contest was “to showcase the natural beauty and ecological value of the DMZ and to remind the public of the longing for peaceful national unification.”

For more information, visit the web shop of Korea Post, or send an email to phila@phila.or.kr.