Triangular ad mail provides a glimpse into the past; Bruno Hauptmann 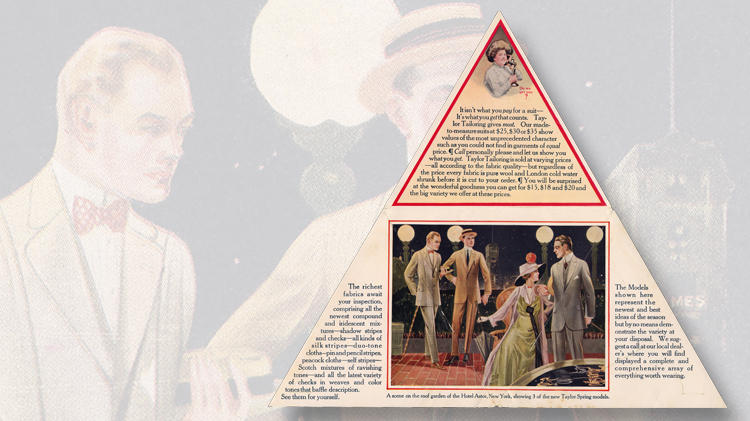 As promised on the front of this mailed triangular piece, there is “Something Interesting Inside.” It is shown here opened to reveal additional illustrations and advertising text. The large image at the bottom pictures three of the latest Taylor suits for 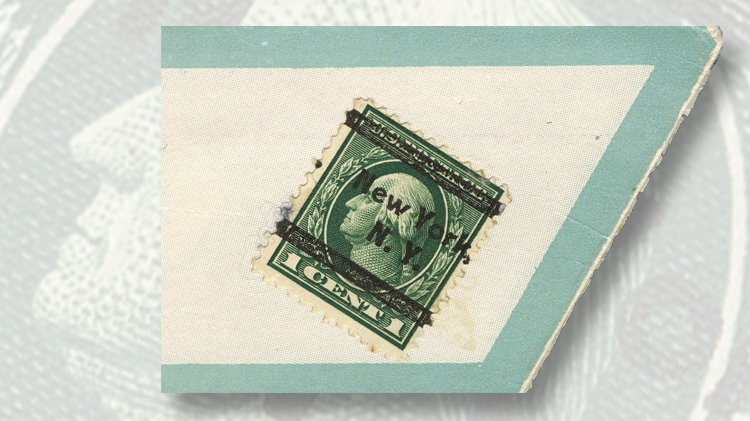 The 1¢ Washington stamp on the triangular ad mail is precanceled New York, N.Y. 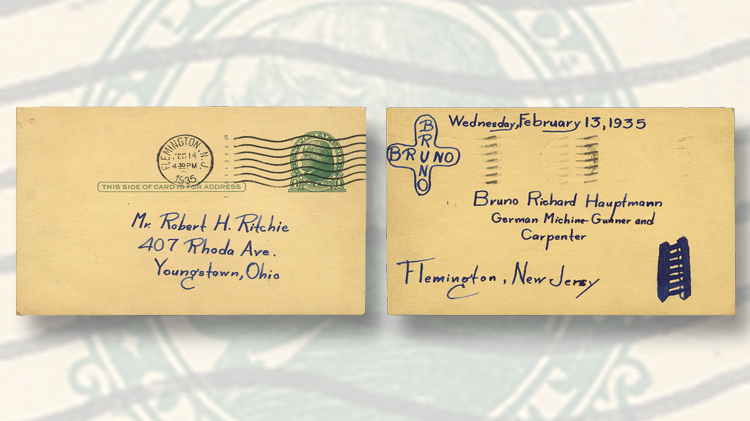 This 1¢ Jefferson postal card, shown front and back, notes the conviction of Bruno Richard Hauptmann in the kidnapping of Charles Lindbergh Jr. 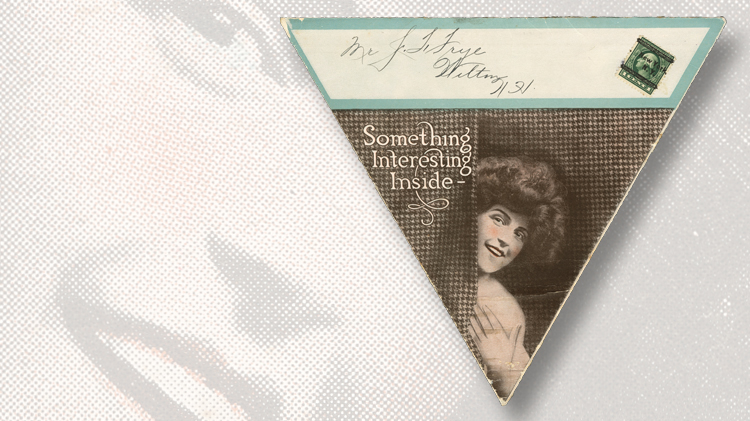 Before the Post Office Department specified shape and dimensions for mail accepted for delivery, some truly interesting advertising mailpieces were created to catch the attention of recipients.

The triangular advertising piece by Taylor Tailoring of Wilton, N.H., is certainly arresting, with colorful graphics and brief but informative text, including the slogan “One hundred cents worth for a dollar.”

For stamp collectors, it is arresting for another reason. Any use of a Third Bureau issue Washington-Franklin precancel is a nice find.

A penny to mail a slick ad like this made it a good investment, and you can make a specialty out of collecting advertising mail of this era because there is a wide range of it. However, there seem to be few survivors of any given piece, as most of this mail was opened (or not) and then deposited in the nearest trash can.

It really is a shame because these ads provide information about the social history of their era. In this case, details about fashion, prices for goods, hairstyles, ad practices and more are revealed.

We are lucky to have the window on the past that advertising mail gives us.

Commemorative covers take many forms, but one of the most unusual I’ve seen is the 1¢ Jefferson postal card shown front and back nearby.

Canceled Feb. 14, 1935, in Flemington, N.J., it marks the conviction and sentence of death in New Jersey’s electric chair of Bruno Richard Hauptmann.

For those who don’t recognize the name, Hauptmann was the primary suspect in the kidnapping of Charles Lindbergh Jr. (the 20-month-old son of aviator Charles Lindbergh) on the evening of March 1, 1932. It was believed that Hauptmann climbed a ladder to the window of the baby’s room, took him, and left a ransom note demanding $50,000.

Although the ransom was paid, the baby’s body was found on May 12, 1932, in woods four miles from the Lindbergh home.

More than two years later, Hauptmann was arrested after he used money linked to the ransom to buy gas.

Subsequent investigations found $20,000 of the ransom money hidden in Hauptmann’s garage. Also, in evidence was what was assessed to be the handmade ladder used in the kidnapping — likely the point of a ladder being pictured on the postal card.

The trial was held in the Hunterden County Court in Flemington from Jan. 2 to Feb. 13, 1934. Hauptmann was executed April 3, 1936, after two appeals failed.

What was described at the time as “the crime of the century” has been examined and re-examined over the years, with some concluding that he was framed, and others that he was properly convicted. There is passion on both sides, but it is at this point simply an intellectual exercise.