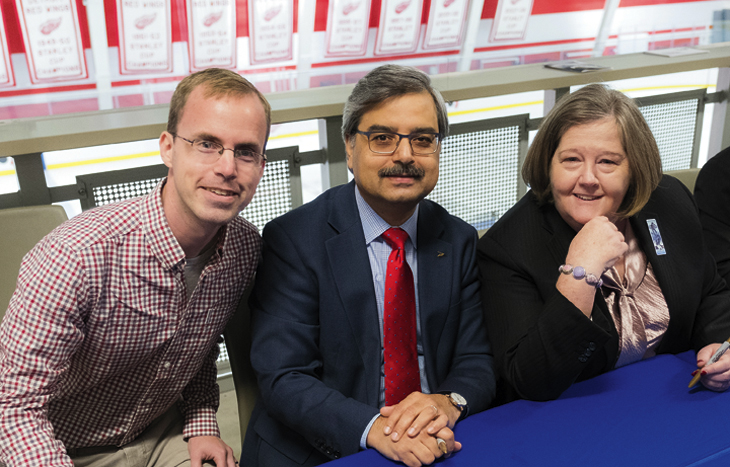 In late October, a rare historic moment took place on the ice in Detroit. It wasn’t a face off of any sort between two nations, the United States vs. Canada, but rather, a reflection on a sport that connects them both.

For that historic moment, two postmasters general stood in one place to dedicate the History of Hockey stamps, a joint issue between the U.S. Postal Service and Canada Post, on Oct. 20 at Belfor Training Center in Detroit’s Little Caesars Arena, home of the National Hockey League’s Detroit Red Wings.

I was thrilled to be part of the crowd of 300 that attended the stamp event. You can see a video of the ceremony at facebook.com/USPS; just click the videos link.

It was Canada Post president and CEO Deepak Chopra who mentioned his belief that this was the first time that the two nations’ postmasters general stood in the same place to dedicate a stamp, even though this was the sixth partnership between the two countries.

Chopra was also gracious with his time and chatted with me about stamps. His reflection on the 2017 Canada joint issues really stood out to me. He said:

“I think joint issues are very rare and very special. We must preserve their sanctity in the sense that they must represent a monumental moment in two nations’ relationship.

“The stamp issue with France reflected Vimy, and as you know Vimy was an incredibly momentous moment in Canadian history because many people would argue that after Vimy Canada really matured as a nation. So it was important for us to do that as a joint issue.

“We have never done a joint issue with India. So the very first issue had to reflect what is so important to the people of the two countries. Diwali is celebrated by one fifth of the world’s population, 1.2 million Indo-Canadians in Canada. So Diwali was a meaningful subject for both Posts.

“And for the United States, with whom we have done five previous joint issues, it made a lot of sense to have an issue that reflected hockey that is so blended. Especially with NHL, Canada 150 anniversary, and so on. So all of that reflects the meaningfulness of the three joint issues this year.”

On a personal note, I look forward to Linn’s continuing to work well with both postal administrations moving forward. This event was a signal of positive things ahead for the hobby, knowing that both nations have a commitment to their stamp programs.