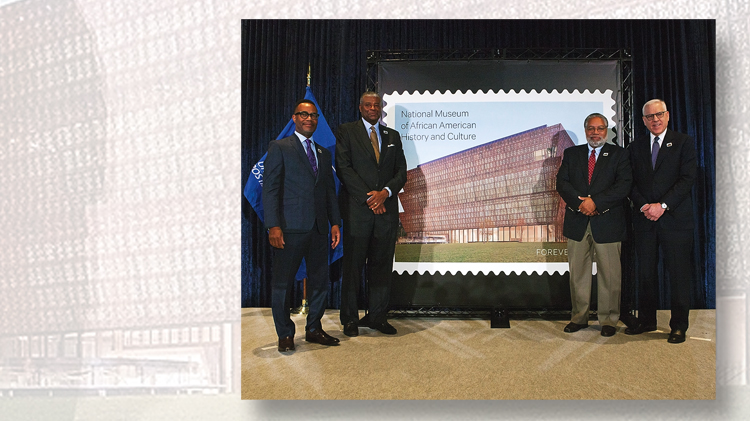 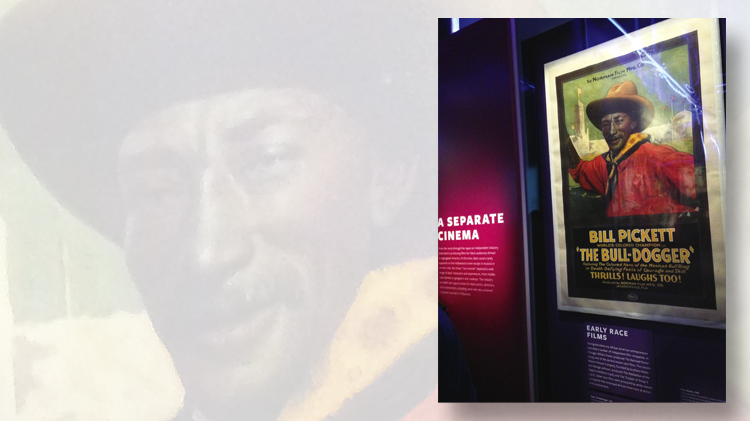 Movie poster of rodeo star Bill Pickett, who was featured on a stamp in the 1994 Legends of the West sheet. Photograph by Jay Bigalke.
Previous
Next

It’s customary at first-day ceremonies for the sponsors of a new stamp to praise the United States Postal Service for having had the wisdom to honor the individual or organization they’ve been promoting.

There was plenty of that when the forever stamp honoring the National Museum of African American History and Culture went on sale in Washington, D.C., early in the morning of Oct. 13.

Bunch praised the stamp, recalling he had learned history through stamps as a young collector.

So did another former stamp collector, Smithsonian Board Chair David M. Rubenstein.

Rubenstein also saluted the new stamp, saying he hoped it could replace the 1993 29¢ Elvis Presley commemorative as the most saved U.S. stamp. He urged the audience of 400 to buy and use the stamp to spread word of the new museum on the National Mall.

“It is a museum for all people,” said Gerald A. Roane, Washington, D.C., postmaster.

Deputy Postmaster General Ronald A. Stroman said the $500 million-plus museum, which opened Sept. 24, 2016, was already the talk of African-Americans across the country.

“To African-Americans, travel to this museum has become a pilgrimage,” he said.

“Have you been there? When are you going? Tell me about the slave ship remnants,” is how the museum was being discussed, Stroman said.

Too many Americans have a “distorted view” of the country’s history because so many black achievements have been forgotten and ignored, he said.

The new museum is changing that, said Stroman.

“It is like a solar panel of energy,” he said.

“Yes, there is anger and tears” for museum visitors, he said. “But there is also joy and excitement that comes with the recognition that the genius and work of African-Americans have played an instrumental role in America’s greatness and status in the world.”

Stroman suggested that one of the unsung heroes of the African-American story was his own federal agency.

“And who is better to collaborate with in this noble mission than the United States Postal Service?” he asked those gathered in the museum’s concourse.

“First of all, no institution in America has done more to help create the black middle class than the U.S. Postal Service,” Stroman said, citing his federal agency’s role in welcoming minority workers at a time when other large employers were not.

The USPS provided not only jobs, but lifetime careers for many African-Americans, he noted.

The Postal Service’s contributions are not directly celebrated in the new museum. Stamps apparently remain the property of the National Postal Museum, another Smithsonian site on Capitol Hill.

A tour of the National Museum of African American History and Culture failed to find a display of African-Americans featured on postage stamps, but many of those who have been commemorated on stamps are also honored in the museum for their achievements.

A movie poster in an area devoted to black movies, for example, honors Bill Pickett, the rodeo star who was featured on a 1994 29¢ Legends of the West stamp.

Panes of that commemorative were recalled after Postal Service officials were shocked to discover they had placed the wrong image of Pickett on one of the stamps. The furor over the stamp recall led to tighter controls on stamp designs and greater attention to the real Pickett’s image.

Museum officials apparently had no problem locating the correct Pickett for their exhibit.

Like the National Postal Museum, the new National Museum of African American History and Culture is open every day of the year except Christmas Day.

There is no admission charge, but timed-entry tickets are required. With more than 3 million visitors since it opened, securing tickets well in advance is recommended.