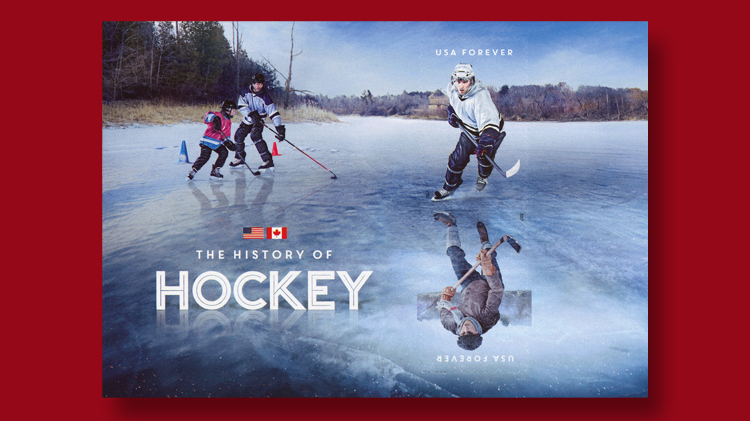 The two-stamp History of Hockey souvenir sheet will be issued Oct. 20, along with a 20-stamp pane with the same two forever stamp designs (10 of each).

The United States Postal Service has revealed the image of the two-stamp souvenir sheet planned for its History of Hockey joint issue with Canada.

The History of Hockey forever stamps were announced by the Postal Service Sept. 28 and previously reported in Linn’s Stamp News.

The issue date for these stamps is Oct. 20. The souvenir sheet design was published on the usps.com website on Oct. 13.

The souvenir sheet is self-adhesive and includes two stamps, using the same two designs that are prepared for the self-adhesive pane of 20.

The stamps show an image of a hockey player using modern equipment on one stamp. The second stamp is positioned tete-beche, or upside down in relation to the first, and shows a player wearing what the Postal Service refers to as “vintage garb” and using hockey equipment from the past.

The positioning of the stamps intentionally makes it appear as though the second stamp is a reflection in the ice of the player shown in the first stamp.

The margin illustration of the souvenir sheet extends the scene beyond the two players on the stamps, to show that the skaters are on a frozen lake, perhaps in Canada or the northern reaches of the United States.

A father and daughter are pictured at left, wearing skates and holding hockey sticks, with plastic pylons serving as a makeshift goal.

Trees and buildings in the distance complete the panoramic winter scene.

At lower left is the inscription “The History of Hockey,” with a small American flag and a small Canadian flag side by side above the lettering.

The 20-stamp pane and the two-stamp souvenir sheet were both printed and processed by USPS contract printer Ashton Potter. Both items are designed by Subplot Design using photographs by KC Armstrong.