Batum issues are few but tricky; stamps of other Georgia regions contested 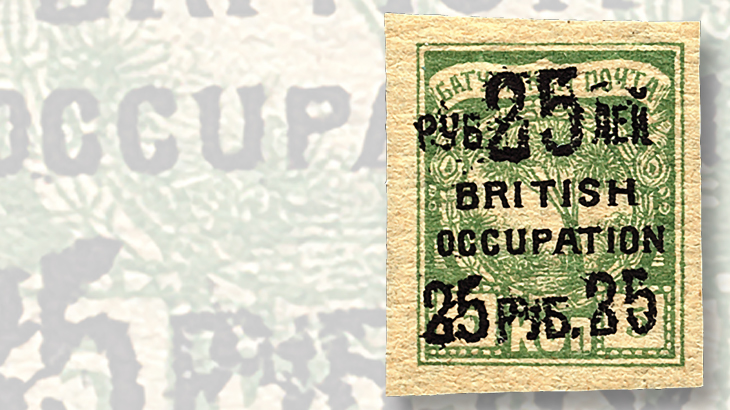 Overprinted for the British occupation and also surcharged 25 rubles, this 1919 5-kopeck Batum Aloe Tree stamp was issued in 1920. 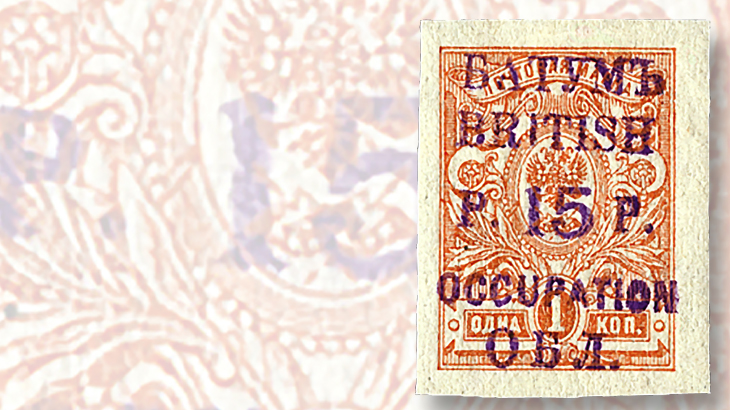 Stamps of Russia also were used during the time of the British occupation, and overprinted accordingly, in 1919 (Batum Scott 24). 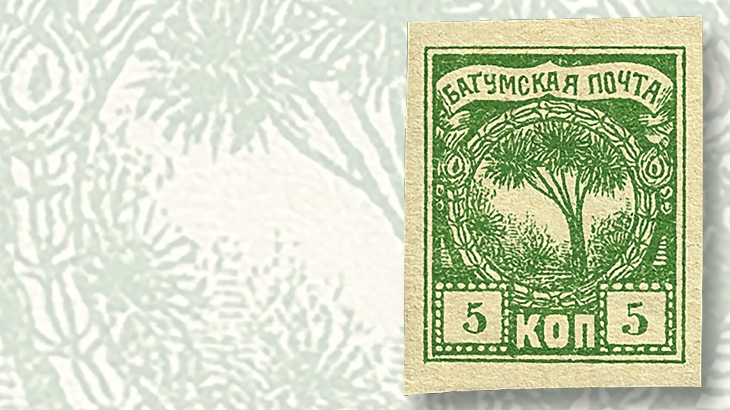 Batum’s first set of stamps, issued in 1919, features an aloe tree design, in six different denominations and colors. This is Batum Scott 1. 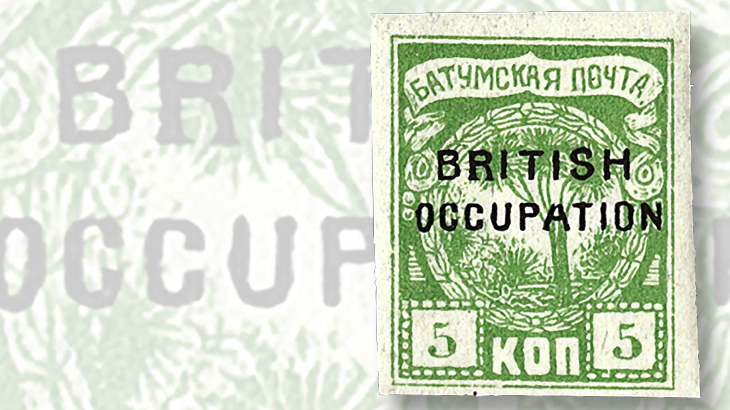 After the first stamp set was released in 1919, Batum began overprinting and surcharging those issues rather than creating new designs. On this example of Batum Scott 13, “British Occupation” refers to Great Britain’s presence in Batum from December 1918 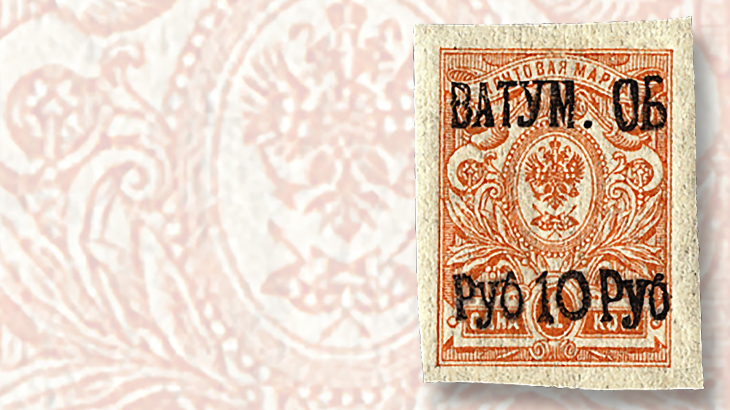 Some Russian stamps also were overprinted for use in Batum, such as this 1917 10-ruble stamp overprinted “BATYM” in 1919 (Batum Scott 7).
Previous
Next

For a worldwide collector, it is rather annoying to open to a page in an album and see lots of empty spaces. Stamps of Batum might be among the missing, and some research will quickly tell you why.

Batum lies on a gulf of the Black Sea near Turkey and within the Republic of Georgia. Its subtropical climate and mild winters make Batum a popular resort, and it also has the best harbor of the Trans-Caucasian coast and is an important oil port.

But what about the territory’s stamps?

Well, to complete a full set there are only 65 listed by number in the Scott Standard Postage Stamp Catalogue, but some of them are difficult to find and expensive. There also is a warning in the catalog: “Counterfeits of Nos. 1-65 abound.”

Originally a Greek colony and then a Roman port, Batum (or Batumi) was fought over for centuries by the Georgians and the Ottoman Turks, and then Russia took it in 1878.

A treaty in March 1918 gave it to the Ottoman Empire, and in April that empire’s 37th Caucasian Division entered Batum.

There was a shortage of stamps at the post office, but letters received “Batumskaya” handstamps.

Russian stamps from 1909-17 also were overprinted, in Cyrillic.

The British moved out in July 1920, and by 1921 Batum was an autonomous part of the Georgian Soviet Socialist Republic.

Many more Russian stamps were overprinted with a variety of surcharges and the words “British Occupation.”

The last of the Batum stamps were issued in 1920, being only more of the 1919 aloe-design issues, again overprinted and surcharged.

But beware of modern changes: In March 1999, the Georgian Ministry of Posts and Communications sent notice to the Universal Postal Union declaring that stamps issued in the names of the “so-called republics of Abkhazia and South Ossetia” are bogus.

Abkhazia and South Ossetia are in the Caucasus and claim independence from Georgia. These entities are not universally recognized as states.

So are the stamps issued by these two places acknowledged?

“Abkhazia and South Ossetia are regions situated within the internationally recognized borders of Georgia, whose territorial integrity is supported and fully recognized by the relevant United Nations resolutions [S/RES/1808 (2008)].

“The regions of Abkhazia and South Ossetia have put into circulation illegal issues bearing the inscription ‘Republic of Abkhazia’ in English, Russian and Abkhazian … and ‘Republic of South Ossetia’ in English and Russian. These illegal issues do not comply with the conditions for postage stamps set out in article 8 of the Universal Postal Convention, but are nevertheless sold as postage stamps on various websites.

“Georgia therefore officially requests that UPU member countries and their designated operators do not allow the dissemination of any information or articles regarding the above-mentioned illegal issues in stamp catalogues or the philatelic press, nor their placing on the market. Georgia also urges the designated operators of UPU member countries not to accept or process any correspondence bearing illegal issues issued by Abkhazia and South Ossetia, but to return any items bearing such illegal issues to their senders. Georgia trusts that the UPU, its member countries and their designated operators, the World Association for the Development of Philately and all other stakeholders will take all necessary steps to ensure that universally acknowledged international norms and principles are upheld.”

The Scott Standard Postage Stamp Catalogue does not list stamps for Abkhazia or South Ossetia.

If you are interested in detecting the difference between genuine and fake 1919-20 Batum stamps, one way to do so is to count the row of dots across the top of the denomination tablet found in the bottom right corner. If you count six dots in that location on the stamp, it is genuine. If you count seven dots, it is a forgery.

If you collect worldwide stamps, consider joining the International Society of Worldwide Stamp Collectors. You can join online; the society’s website contains a great deal of helpful information.

Get on good terms with the language of stamp collecting