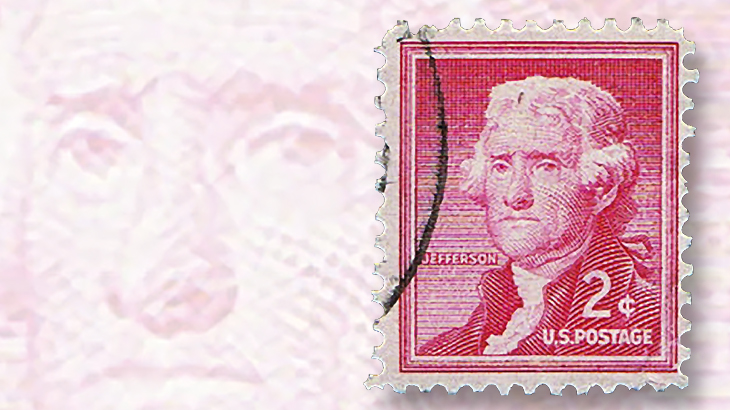 A stamp much like this United States 2¢ Jefferson of the Liberty series was shown in a recent eBay listing, described as “very rare.” It is a common stamp instead. 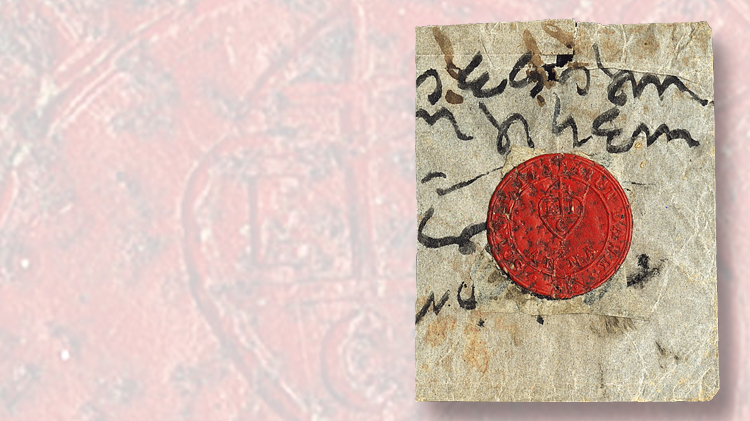 A used example of the rare Scinde Dawk stamp, which is embossed on a red wax wafer. 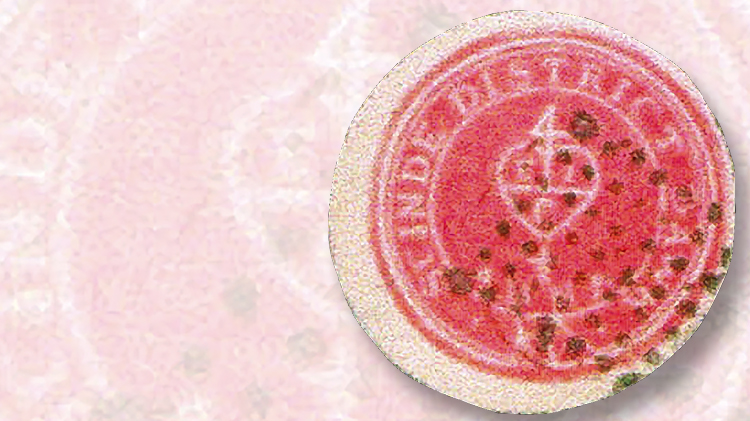 This item was offered on eBay simply as an “India State Scinde District Dawk” at the equivalent of $65, despite having a Scott catalog value of $26,000 if genuine. The stamp did not sell. 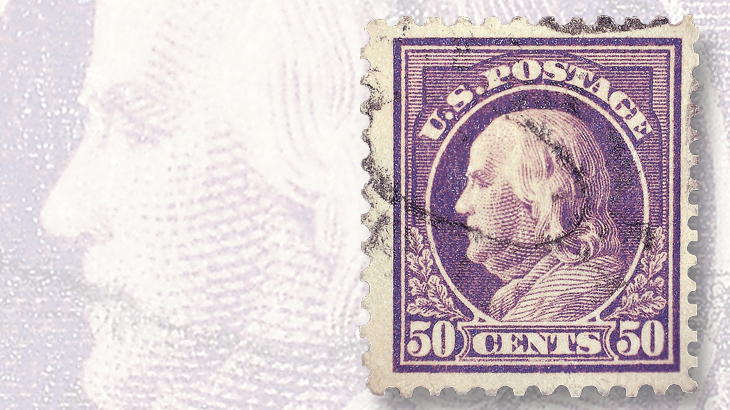 This discolored United States 1917 50¢ Franklin stamp is perforated on all four sides, but the perforations on the right don’t match those on the other three sides. Could this be a new error? 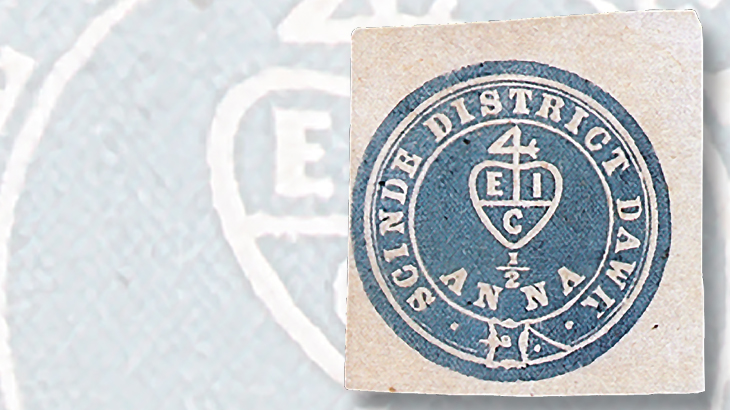 The Scott catalog image for the 1852 Scinde Dawk stamp embossed in blue on white paper.
Previous
Next

While eBay is a wonderful resource for stamp collectors, as with just about every good thing, it can be a mixed blessing.

An email from a Linn’s reader highlighted two recent listings on eBay that fall into the mixed blessing category and connect to the theme of this monthly series of columns on expertizing.

The first is a listing of a 1954 2¢ Thomas Jefferson Liberty definitive similar to the one shown with this column. The stamp offered on eBay is used and described as “very rare,” though there is no support for this statement.

There is a rare 2¢ Jefferson; it is listed in the Scott Specialized Catalog of United States Stamps and Covers as 1033a, printed on Silkote paper. This was an experiment to try to reduce waste due to off-center perforating. A mint example is valued at $275, a plate block at $2,000, and an on-cover use at an amazing $15,000.

But there is no claim in the eBay listing that the stamp offered is the Silkote variety. If there were such a claim, it would have to be backed up by an expertizing certificate.

No, this seems to be a garden variety 2¢ Jefferson, listed as a buy-it-now item on eBay for about $13, converted from £10. Now, there’s a clue. The seller is not a United States-based collector, and might not have access to a Scott catalog. It seems that the seller is simply guessing, and eBay has no mechanism that screens such listings for truth or accuracy.

Thus, the potential customer really does have to arm himself with knowledge, and keep the old saying in mind: “Let the buyer beware.”

It also helps to keep in mind that no one can provide a precise, generally accepted definition of the term “very rare.” Does it mean one example known, or 10, or 100?

In this instance, the “very rare” description is inappropriate in the absence of a substantiated claim that the stamp is Scott 1033a. Hundreds of millions of the basic 2¢ Jefferson stamp were produced. Indeed, the used value is the routine 25¢ that Scott uses as its minimum catalog value.

So, the take-away here is that buyers can not accept claims at face value. If you are going to spend hard-earned money, it is essential that the claim be substantiated by the noting of a certificate in the listing, and that you check your own reference material, such as a Scott catalog, to be certain that the asking price is reasonable.

The second example from an eBay listing is advanced as a world-class rarity: the Scinde Dawk issue of India. The stamp is found at the start of Scott’s India listings as A3, one of three embossed, imperforate ½-anna stamps issued for the Scinde District Post (A1-A3).The catalog value for A3 alone is $165,000 unused, and $26,000 used. Only one is recorded unused. The stamp listed on eBay is clearly used.

Immediately alarm bells should go off. First, there is a buy-it-now price of £50, about U.S. $65. My correspondent reported that despite the bargain price, the stamp has not sold in two tries; this being the third try. You would think a rarity like this would be snapped up by India specialists the first time it appeared. That it has not sold is a shot across the bow.

Further, no claim is made in the eBay listing other than the description “India State Scinde District Dawk.” In the absence of a statement to the contrary, one is led to assume that it is genuine.

The lack of any claims offers another warning. If this were something special, buyers should expect the seller to have and advertise a certificate, to state a catalog number, and to hype the stamp as a desirable addition to a collection. The silence on those matters is deafening.

Finally, the price of the item offered should be commensurate with the catalog value.

As if all of this were not enough, a look at the Scott catalog listings for early India reveals several facts that seal the fate of this stamp. A note after the A3 reads: “Nos. A1-A3 were issued without gum. No. A3 is embossed on red wafer. It is usually found with cracks and these examples are worth somewhat less than the values given, depending upon the degree of cracking.”

The illustration for the Scott listing for the Scinde Dawk stamps is a bit of a problem because it looks like the eBay stamp, only blue instead of red. So unless you have read the fine print in the catalog, you might assume that A3 could look like that.

Because Scott A3 is a red wafer embossed on paper, the example shown with the eBay listing is clearly a fake, and it has a fake cancellation that mimics the genuine cancel of the time.

That’s why no serious collector has bought this “bargain.”

Another Linn’s reader sent the discolored 50¢ Franklin of the Third Bureau issue for examination. It is perforated gauge 11 on the top, bottom and left side, and perforated 12 on the right. The reader asked if this might be a hitherto undiscovered new error?

Given the gauge-11 perforations on three sides, the stamp can be presumed to be Scott 517, the 1917 version. How does an expertizer approach this? With considerable skepticism! For a new error to appear after 100 years would be highly unusual.

The first thing to do is to verify the 11-gauge perforations using the Kiusalas gauge, which is keyed to U.S. issues of the first hundred years and measures with more precision than the standard gauge. That confirmed that the 11-gauge perforations are genuine, meaning that the basic stamp is indeed Scott 517, and not one of the two perf-12 versions of this stamp (421 and 422).

This brings up the next question: Can the gauge 12 perforations at right be genuine?

To answer this, you need to find out whether a 12-gauge perforator was being used by the Bureau of Engraving and Printing in 1917, and if so, do the right-side perforations match the proper gauge?

We needn’t get to the second question, because the last use of gauge-12 perforations for regular-issue U.S. stamps was in 1914. So, perf 12 was long out-of-date by the time that perf 11 stamps were being produced.

What do we have, then? My bet is that this example of Scott 517 originally had a straight edge on the right side. Someone recognized that fully perforated stamps without a straight edge sold for more than the less-desirable straight-edge versions and “improved” it by adding perforations on the right. However, the only equipment available was gauge 12, which was less important than having holes on all four sides on the stamp.