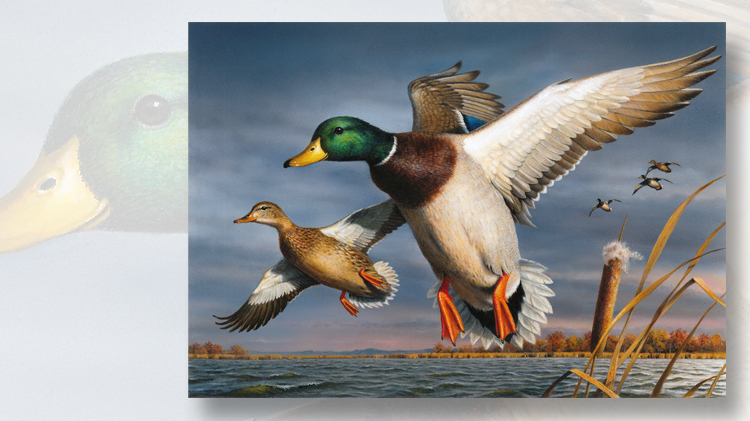 Bob Hautman scored his third win Sept. 16 at the federal duck stamp contest held at the University of Wisconsin at Stevens Point. His acrylic painting of two mallards will appear on the 2018-19 federal duck stamp that will be issued in late June 2018.

Bob Hautman of Delano, Minn., the third leg of the seemingly unstoppable Hautman family triumvirate, won the 2017 federal duck stamp art contest Sept. 16 with his acrylic painting of a pair of mallards alighting among cattails.

Hautman’s entry was plucked from 227 pieces of art entered into this year’s contest, held at the Noel Fine Arts Center of the University of Wisconsin at Stevens Point.

The 2018 contest, Sheehan stated, will “place emphasis on hunters,” suggesting that perhaps — for the first time ever — a hunter might well appear on a federal duck stamp.

Linn’s contacted the Fish and Wildlife Service. Although the FWS was unable to provide additional details, it did confirm there is no prohibition against hunters appearing in a duck stamp design, as long as a living example of an eligible species is the focus of the piece.

Judging of this year’s contest took place during a two-day period in three rounds. Of the 227 original entries, 216 were actually judged. The other 11 were disqualified.

The first round of voting was a simple disqualification round. Judges, each of whom had blinders preventing them from seeing other judges, were shown original artwork for each entry.

Signs reading “IN” or “OUT” were held up by each of the five judges, with only those entries receiving at least three “IN” votes proceeding to the second round. A total of 55 paintings received qualifying votes, with an additional nine to be reconsidered as an elimination override at judges’ requests. Each judge was allowed to override votes for up to five choices.

In the second round, entries were eliminated through a point system. Judges held up point-value signs (1 to 5) and entries achieving one of the top five highest combined scores moved on to the final round.

A dozen entries were considered for the final round.

Again, the point system was used (with only the 3, 4, and 5 point-value cards), with those three garnering the highest combined scores placing first, second, and third. Hautman’s entry received 25 points (a clean sweep), Alexander’s received 24 points, and Clayton’s garnered 22 points.

Judges for this year’s contest were Jane Kim, an artist and science illustrator; Tim Pearson, an artist and fly-fishing guide who paints mostly in watercolors, inspired by the waters and surrounding wilderness of Lake Superior; Richard Prager, an avid collector of federal and junior duck stamps, duck stamp remarques (stamps with additional artwork added, either to the stamp, the selvage, or both), and original artwork; Robert Spoerl, a lifelong hunter and conservationist with a passion for waterfowl; and Dr. Jacob Straub, a waterfowl biologist and wetlands and waterfowl conservation chair for UW-Stevens Point’s College of Natural Resources.

Judges may only serve once in their lifetime on the duck stamp jury. Panels usually include two artists, two conservationists, and one stamp collector.

Although the Hautmans — Bob, Jim, and Joe — are all humble, outgoing, and very highly regarded throughout the field, they are feared in wildlife art circles as a seemingly undefeatable juggernaut. This has even led to pop-culture references, such as those found in the movie Fargo.

Jim and Joe each have won five times, tying the record set by Maynard Reece. The good news for emerging artists is that none of the Hautmans is eligible to submit artwork for the 2018 competition.

There is a three-year waiting period for any winning artist before being eligible to enter the contest again. Jim Hautman won the 2016 contest, and Joe won the 2015 competition.