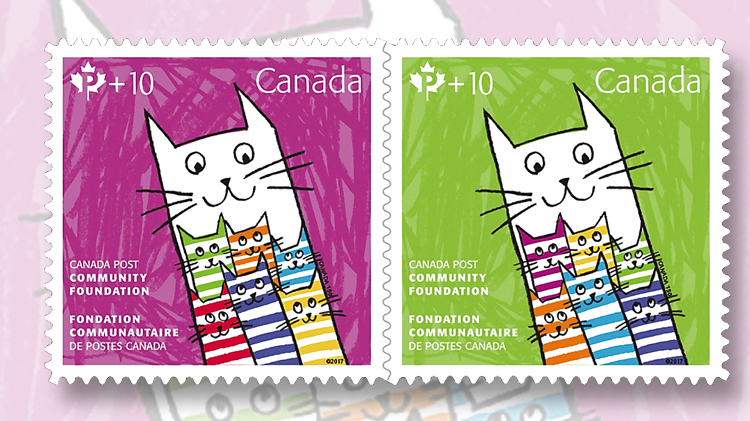 The self-adhesive, nondenominated permanent stamps pay Canada’s basic domestic letter rate, currently 85¢, with a 10¢ surcharge added to support a charity, indicated on the stamp by “+ 10” following the “P.”

As in recent years, a $1 donation from each 10-stamp booklet sold goes to the Canada Post Community Foundation, which funds programs to benefit Canadian children and youth.

As the foundation’s web page notes: “In 2016, 125 organizations delivering essential programs for children and youth shared almost $1.2 million in funding from the Foundation.

“In the past four years, the Foundation has provided more than $5 million to build libraries, create sports and breakfast programs, and ensure access to crisis lines, anti-bullying and mental health initiatives, special needs clinics and life-skills training. The money has helped promote physical activity and play for children of all abilities and helped at-risk youth gain a better understanding of how education is vital to their future. The Foundation is truly delivering a brighter future for Canadian children and youth.”

Two decades later, Canadian semipostals returned in 1996 with a 45¢+5¢ stamp to support literacy (Scott B13).

A dozen years later, Canada Post began issuing annual stamps with the current “P+10” denomination, beginning with new stamps from 2008 to 2011 for the Canada Post Foundation for Mental Health (Scott B14-B18), followed ever since by stamps supporting the Canada Post Community Foundation (B19-B24).

As in 2016, this year’s stamps were created by internationally acclaimed London, Ontario, art director and designer Andrew Lewis.

The new stamps show a happy cat family, with a grinning mother doting on six smiling striped kittens. Also like last year’s stamps, two versions of the same design have been used on stamps for the annual fundraising campaign.

The major differences between the two cat designs are the background colors (dark pink on one stamp, and green on the other), and the colors of the stripes on the kittens.

Five of each stamp, configured as se-tenant pairs, are included in the self-adhesive, die-cut booklet of 10.

Printed by Lowe-Martin in eight-color offset lithography, the 32-millimeter square, die-cut stamps will be issued in 160,000 self-adhesive 10-stamp booklets priced at $9.50.

Also, 8,000 of each of the two FDCs will be made available, both with an Ottawa, Ontario, first-day pictorial cancellation showing a smiling cat with a huge heart.