Have you come across plate blocks with no plate numbers? 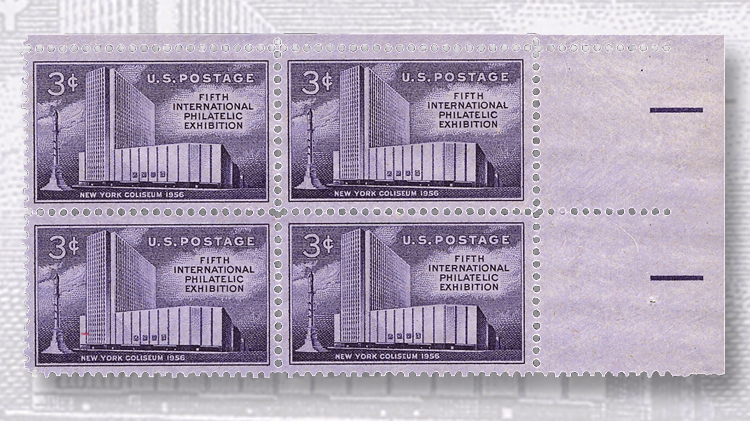 This block of the 1956 Fifth International Philatelic Exhibition 3¢ stamp seems to be missing a plate number, but it is entirely normal. 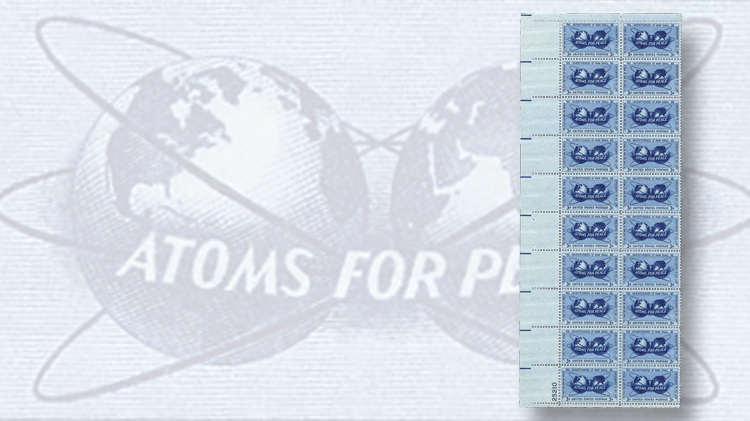 From a 50-stamp post-office pane, this left margin strip of the 1955 3¢ Atoms For Peace stamp shows how each pane is created with a block — in this case at upper left — that has no plate number.
Previous
Next

I receive the following question a couple of times a year: “I have a plate block but it has no plate number. How come? Is this valuable?”

I understand how collectors could be flummoxed by such items. However, the answer is that in the vast majority of cases they are not plate blocks.

Instead, they are margin blocks from the other end of the outer margin of post office panes — in other words, the corner without a plate number.

Most United States stamps from the late 1920s to the turn of the century were printed from plates made up of 200 or 400 subjects: 200 commemorative-size or 400 definitive-size stamps.

The plate printed a sheet with a plate number on each corner, and the sheet would be quartered into four post office panes of 50 or 100 that would be shipped to post offices.

These panes had outside margins with a plate number in one corner, as shown in the example of the 1955 3¢ Atoms For Peace issue (Scott 1070), which is a lower-left post-office pane. At the top end of this wide margin, there is a block that looks like a plate block without a plate number.

It’s the normal condition for that end of the margin, but because it is usually torn off as being of no consequence, many collectors have never seen one.