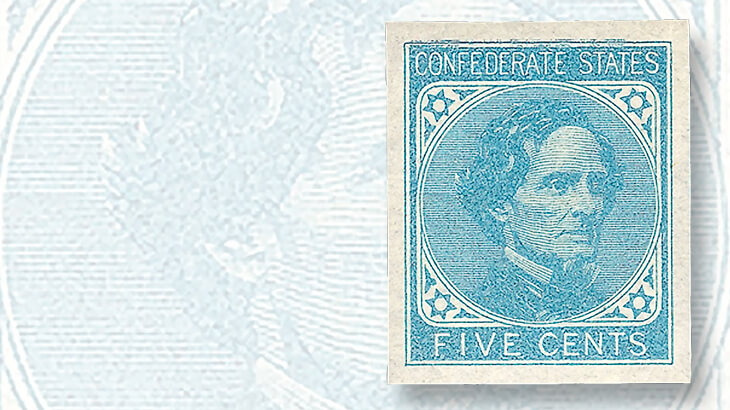 The 5¢ light blue Jefferson Davis stamp issued in 1862 by the Confederate States of America was one of the stamps featured on the Sept. 18 episode of the popular game show Jeopardy!

The popular syndicated television game show Jeopardy! returned to the subject of stamps in a category on the Sept. 18 episode.

The category titled “Stamping Philately” appeared in the first Jeopardy round.

Following the familiar answer-and-question format of the show, the category contained five clues about United States postage stamps, each read aloud by host Alex Trebek. The contestants competed to respond to each statement with an appropriate question.

On Monday’s episode, the contestants were Angela Ward of Texas, Andy Hyland of Kansas, and returning two-day champion Ellen Wernecke of Illinois.

Hyland selected the first philately clue, valued at $200, which read, “These stamps went on sale in 2007 to guard against price increases, but a 2-cent decrease in 2016 surprised many.”

Hyland rang in first with the correct response: “What are forever stamps?”

He then left the category to select a clue from another, but returned to philately after all other clues had been chosen.

He called for the $600 stamp clue next, which stated, “The (in)famous 1918 Inverted Jenny showing a plane upside down was fittingly issued for this 7-letter type of delivery.”

Ward rang in and asked, “What is airmail?”

Her correct response gave her the right to select next, and she picked the $400 clue.

Trebek read the clue, which led Hyland to ring in with an incorrect response citing Elmer Fudd. Ward then followed up to correctly identify Bugs Bunny as the subject of a popular 1997 stamp.

The wording of the $400 clue was “Don’t be be-fudd-led that collectors saved more than 40 million stamps of this cartoon critter in 1997.”

The $800 clue selected next by Ward was a video daily double, which allows the contestant to name a wager value before the clue is revealed. Ward chose to wager $1,500.

The video screen showed an image of the 1862 5¢ light blue stamp issued by the Confederate States of America, as Trebek spoke: “A first set of stamps with this leader were printed in England but intercepted by the Union. A second set made it through.”

Ward promptly and correctly replied, “Who is Jefferson Davis?” to add to her lead in the game.

The last clue in the category, for $1,000, asked contestants to identify the artist whose famous portrait appears on a 1934 stamp honoring mothers of America. And Ward again rang in with the correct response, “Who is Whistler?”

Ward’s success in the philately category was indicative of her overall effort: At the end of the game, she was the top scorer and new champion, with winnings totaling $11,000.

The episode broadcast May 9 in the previous season included a category titled “On a Postage Stamp,” which was reported in the May 29 Linn’s Stamp News.

Jeopardy! began its 34th season in syndication Sept. 11. The show, which won the 2017 Emmy Award for Outstanding Game Show, is produced by Sony Pictures Television.