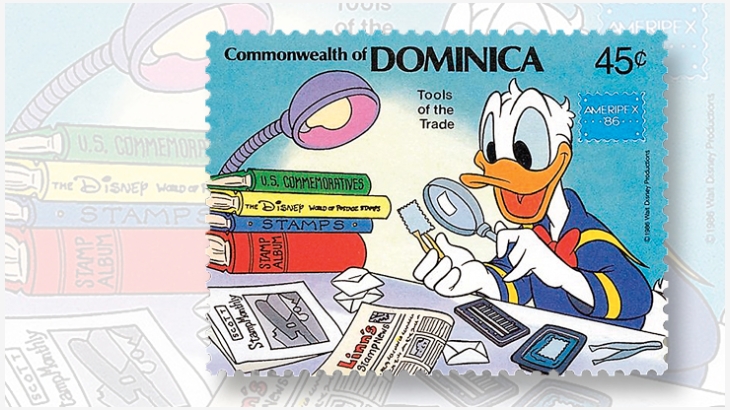 The front page of an issue of Linn’s Stamp News is featured on this 45¢ stamp issued by the island of Dominica May 22, 1986, to honor the Ameripex international stamp show.

In August, I was invited to speak at the American Philatelic Society’s Writers Unit #30 breakfast. The event took place Aug. 6 during the APS Stampshow at the Greater Richmond Convention Center in Richmond, Va.

Forty-five years ago, in 1972, I began my journey with what is now Amos Media, publisher of Linn’s Stamp News and the Scott catalogs, and I was asked to share highlights of this journey with members of the Writers Unit.

I will share a few of these highlights in this week’s column and the Editor’s Insights column that follows next week.

When I began working at Amos, the company was named Sidney Printing and Publishing Co., and I joined the staff of the coin publications, Coin World, Numismatic Scrapbook, and World Coins.

Just a few years earlier, in 1969, the Amos family had purchased Linn’s Weekly Stamp News from Carl Reuth who had purchased the newspaper from founder George W. Linn in 1965.

Sidney Printing and Publishing Co. had printed Linn’s in its Sidney, Ohio, plant since 1942.

During my first three years at Amos, the company went from hot type to cold type; moved from downtown Sidney to our current building on the outskirts of town, surrounded by fields, farmland, and a soybean-processing plant.

Moving the company’s 168-foot, web-fed newspaper press was a real challenge, and yet we never missed publishing an issue of Linn’s or Coin World.

At the same time, the company changed its name, from Sidney Printing and Publishing Co. to Amos Press.

I knew early on in my career to take company owner J. Oliver Amos (1909-1997) seriously when he stated at each company meeting, “The only constant at Amos is change.”

I joined Linn’s editorial staff in 1976, just in time for the Interphil 76 international stamp show. The editorial content of the weekly stamp newspaper focused heavily on the nine-day event that took place in Philadelphia.

The 1970s and early 1980s brought what is affectionately referred to as the stamp boom — a time of soaring stamp prices, when a declining stock market had investors turning their sights to stamps and precious metals.

More changes came to Linn’s. Imagine the editorial staff’s surprise when we were told in September 1982 that Michael Laurence, a former editor for Playboy Enterprises, was named the new editor of Linn’s.

Some thought a centerfold might be in Linn’s future, but that never materialized.

A year later, Laurence was named editor-publisher of Linn’s and quickly transformed Linn’s into a hard-core stamp newspaper with an emphasis on news and the stamp collector.

In the process, he also transformed Amos Press.

Just two years after joining Linn’s, in 1984, he convinced the Amos family to acquire Scott Publishing Co., including the Scott stamp catalogs, albums, and supplements. Under the Amos umbrella, the improvements to the catalogs have been substantial and significant.

Two years later, in 1986, Linn’s agreed to publish a daily newspaper at Ameripex 86, the 11-day international stamp exhibition in Chicago, achieving a first in the philatelic world.

Linn’s editors sent stories from the show floor back to the editorial offices in Sidney using computers connected to telephone lines. We hadn’t heard of Wi-Fi yet.

Each day Linn’s was printed in Sidney and hauled by truck the next day to the show at the O’Hare Convention Center in the suburb of Rosemont, Ill. The daily newspapers arrived no later than 7 a.m. each day and were distributed at the gate to show-goers. Each daily paper had 84 tabloid-size pages in two sections.

In the 1990s, both Linn’s and Scott moved head on into the digital age. I will cover this dynamic transition in next week’s Editor’s Insights.