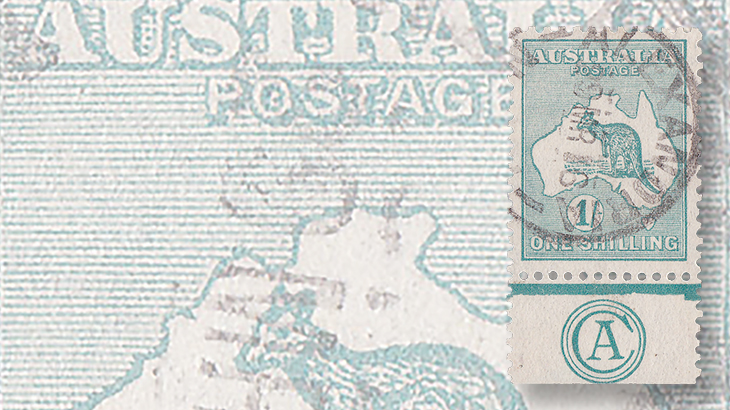 This 1-shilling Kangaroo stamp from Australia with the CA monogram in the bottom selvage (position 57 in the left pane of 60) sold for about $7,150 at the Sept. 7 Status International sale in Australia.

In the land down under, the kangaroos are hopping.

Status International, an Australia-based auction house, held its 335th sale Sept. 7, highlighting several rare Australian stamps featuring a kangaroo on a map of Australia. These stamps, affectionately known as Roos among collectors, almost did not exist.

The winner of the 1911 stamp design competition came up with a stamp picturing the head of King George V in a frame, with a kangaroo and an emu on either side of him.

After the competition, but before the new stamps were produced, a new postmaster general was appointed. He rejected the design, and a new artist, Blamire Young, was commissioned to produce new designs.

Young’s new design copied the kangaroo from the second-place design of Edwin Arnold and placed it on a map of Australia. This design was accepted and issued in 15 denominations in 1913.

All 15 denominations were printed from plates of 120 in two panes of 60.

Monograms of the printer, J. B. Cooke (JBC), and the Commonwealth of Australia (CA) were placed in the bottom selvage margins of the panes: below position 58 of the right pane and below position 57 of the left pane, respectively.

A used 1-shilling Kangaroo with wide crown and narrow A watermark (Scott 42) and without the attached monogram selvage has a Scott catalog value of $35.

A total of 14.64 million of this 1sh Kangaroo stamp were issued, which yielded 244,000 stamps with a monogram in the bottom selvage.

Unfortunately, almost all of these monograms were torn away from the stamps, especially before the stamps were used.

Status International offered a 1sh Kangaroo in the dull green shade (purported to be the rarest shade) with a CA monogram and postmarked in Alexandria, New South Wales. The firm notes that this is the finest example existent and unique in this shade. However, The Australian Commonwealth Specialists’ Catalogue by Brusden White notes another used example in the dull green shade, postmarked at Cairns, Queensland.

Status International’s sale also included a scarce £1 brown and blue Kangaroo with wide crown and wide A watermark and a JBC monogram (Scott 14).

In a single print run, 240,000 £1 brown and blue Kangaroo stamps were produced, of which 4,000 had monogram selvage — 2,000 each of JBC and CA. Of these only one strip of three, two mint singles, and three singles overprinted “Specimen” remain in existence. The strip of three is in the Royal Collection. All known examples have part of the monogram cut off due to narrow selvage.

The £1 Kangaroo stamp in the Status International auction, with fine centering and perforations almost touching the design in the top margin, went to a new owner for almost $42,000.

In 1910 Rhodesia planned to issue a beautiful stamp design with the heads of King Edward VII and his wife Queen Alexandra. A set of 18 denominations in different colors was envisioned to commemorate the 10th anniversary of his reign. Collectors know them as the Double Heads.

Unfortunately, before the stamps could be issued, the king died. His son, King George V, took the throne. The design was quickly changed to place his head with that of Queen Mary’s, his wife.

The new designs were issued and remained the definitive set in use until 1913. Several years later, Rhodesian postal authorities made large quantities available to collectors.

In 1924 Stanley Gibbons acquired the remaining stock and, upon inspection, made a startling discovery. Two sheets of 50 of the £1 stamps were printed in the colors of the 10-penny stamp: carmine and reddish mauve (Scott 118d). Both sheets were generally centered toward the bottom and/or right, and possess gum disturbances.

Status International offered one of two margin imprint examples in existence. The stamp, never hinged and centered to the bottom and slightly to the right as normal, sold for the equivalent of almost $22,000.

Want to read the rest of our worldwide Auction Roundup?

In addition to the Status International sale, Tim Hodge breaks down a recent Cherrystone sale, along with a Rauhut & Kruschel auction that took place in Germany a few weeks ago. Subscribe to Linn’s Stamp News to read all about it!