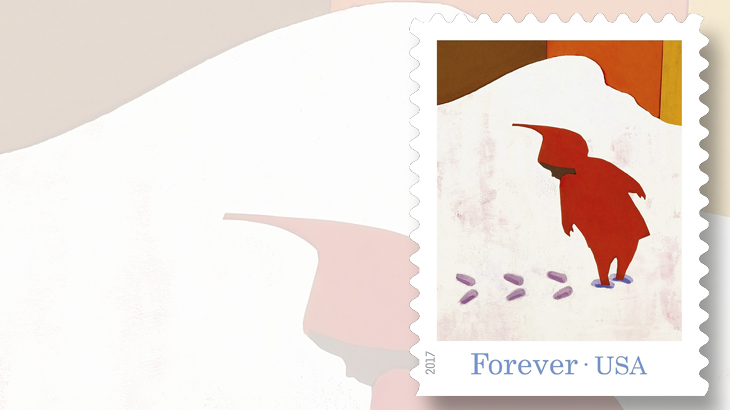 In an illustration from the 1962 picture book The Snowy Day by Ezra Jack Keats, Peter looks back at tracks he made in the snow. The stamp is one of four from a new set that will be issued Oct. 4 in a double-sided pane of 20. 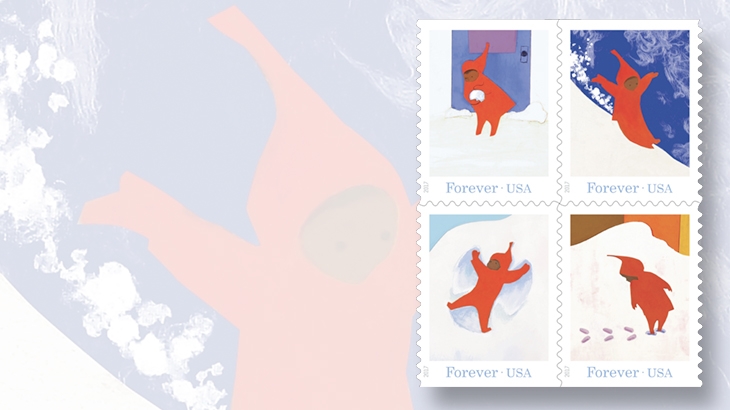 Four nondenominated (49¢) forever stamps will be issued Oct. 4 by the United States Postal Service to commemorate the popular picture book The Snowy Day by Ezra Jack Keats. Each stamp depicts Peter, the boy in the red snowsuit, who enjoys a day exploring
Previous
Next

The story of Peter, the boy in the red snowsuit, is summed up in the publisher’s blurb on the book’s dust-jacket flap: “The quiet fun and sweetness of this small boy’s small adventures in the deep, deep snow have the true quality of all childhood’s delight in contented solitude. Beautiful spacious pictures and just the right number of the right words tell a story to love and remember.”

Published in 1962, The Snowy Day won the Randolph Caldecott Medal the following year for the most distinguished picture book for children.

The public library of Keats’ hometown of Brooklyn, N.Y., will host the first-day ceremony at 10:30 a.m. Oct. 4. The Brooklyn Public Library’s central library is located at 10 Grand Army Plaza. The event is free and open to the public, but with limited seating: individuals wishing to attend must request a reservation online. A confirmation will be sent via email from USPS National Events before Sept. 29 to confirm admission, according to the Postal Service.

Participating in the ceremony will be Linda E. Johnson, the Brooklyn Public Library president and CEO; children’s author Andrea Davis Pinkney, who wrote A Poem for Peter, The Story of Ezra Jack Keats and the Creation of The Snowy Day; Deborah Pope, executive director of the Ezra Jack Keats Foundation; and Roderick N. Sallay, USPS government relations and public policy acting director.

In A Poem for Peter, Pinkney said, “As an African American child growing up in the 1960s, at a time when I didn’t see others like me in children’s books, I was profoundly affected by the expressiveness of Keats’s illustrations.”

The stamps are being issued in a double-sided pane of 20, with five of each design. The first design shows Peter forming a snowball to put in his pocket to keep for the next day. In the second design, he is sliding down a “heaping mountain of snow.” The third stamp depicts Peter making a snow angel, and the fourth shows the tracks he made while crunching through the snow with his toes pointing in.

Keats (1916-83), the son of Polish-Jewish immigrants, grew up in Brooklyn, excelling at art at a young age. Although he received scholarships to attend art school, he worked to support his family instead (his father had died a day before Keats’ high school graduation in 1935).

His jobs during the Depression included working as a mural artist for the WPA (Works Progress Administration) and as an illustrator of backgrounds for the Captain Marvel comics. Also, according to Keats’ biography on the website of the Ezra Jack Keats Foundation, he designed camouflage patterns while serving in the Army during World War II.

After the war, he studied art in Paris and then returned to New York to work as a commercial artist.

He began illustrating children’s books in the 1950s, and co-wrote and illustrated My Dog is Lost in 1960.

The Snowy Day came two years later, but the inspiration for the character of Peter originated two decades earlier when Keats saw a series of black-and-white photographs in Life magazine of an African-American boy in Georgia reacting to a blood test.

Keats said in his acceptance speech for the Caldecott award: “Years ago, long before I ever thought of doing children’s books, while looking through a magazine I came upon four candid photos of a little boy about three or four years old. His expressive face, his body attitudes, the very way he wore his clothes, totally captivated me. I clipped the strip of photos and stuck it on my studio wall, where it stayed for quite a while, and then it was put away.”

Keats continued: “In more recent years, while illustrating children’s books, the desire to do my own story about this little boy began to germinate. Up he went again — this time above my drawing table. He was my model and inspiration.”

Keats also tried new artistic techniques in the book. The Ezra Jack Keats Foundation said that a “collage with cutouts of patterned paper, fabric and oilcloth; homemade snowflake stamps; spatterings of India ink with a toothbrush — were methods Ezra had never used before.”

In addition to other awards and recognition, The Snowy Day was listed on the Library of Congress’ online exhibit “Books That Shaped America”. This listing honors The Snowy Day as the “first full-color picture book with an African-American as the main character.”

Among the more than 20 other books that Keats would write for children, six of them featured Peter. One of these, A Letter to Amy, even has a postal theme, showing Peter writing a party invitation and then venturing out in a storm to mail it. After he finished his invitation, Peter said, “Now I’ll mail it,” and his mother reminded him, “Put on a stamp.”

Along with the new double-sided panes of 20, the Postal Service is offering a press sheet with die cuts for $78.40. The sheet contains 160 stamps (eight panes).

The pictorial black first-day cancel depicts Peter in his snowsuit surrounded by snowflakes of different shapes and sizes. The full-color first-day cancel reproduces the illustration from the book’s cover showing Peter by a stoplight looking back at his footprints in the snow.

Technical details and first-day cancel ordering information for The Snowy Day stamps are provided below:

Standard ordering instructions apply. Collectors requesting first-day cancels are encouraged to purchase their own stamps and affix them to envelopes. The first-day cover envelopes should be addressed for return (a removable label may be used), and mailed in a larger envelope addressed to The Snowy Day Stamps, USPS Stamp Fulfillment Services, 8300 NE Underground Drive, Suite 300, Kansas City, MO 64144-9900.

Requests for first-day cancels must be postmarked by Dec. 4.