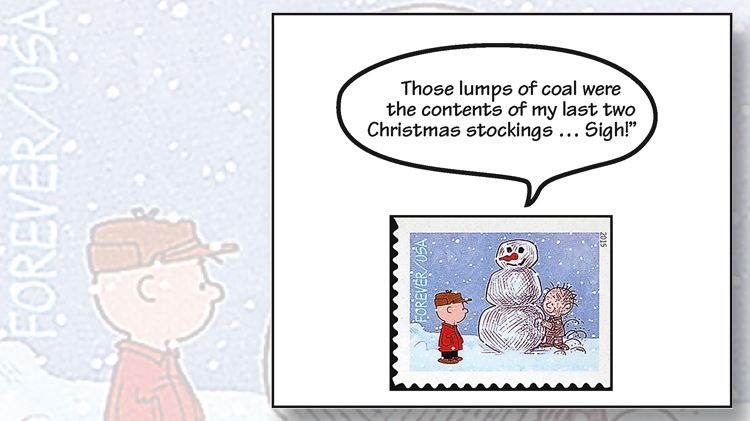 The August cartoon caption contest featured the 2015 Christmas forever stamp showing Charlie Brown, Pigpen, and a snowman. The winner of the nonphilatelic part of the contest, Gordon Trotter of Sarastoa, Fla., has Charlie Brown lamenting the type of indig

If you notice a certain resemblance between the Peanuts character Pigpen and his snowman on the 2015 Christmas forever stamp that served as the cartoon caption contest stamp for August, you are not alone. That was the theme most often used in entries to the contest.

Pigpen carries around a permanent cloud of dirt. How could that not affect his snowman?

Mike Dornbrock of Cedar Falls, Iowa, addresses this by having Charlie Brown say, “For best results, Pigpen, take that snowman to the dry cleaners!”

Alan McCleaf of Fredericksburg, Va., adds a political element by having Charlie Brown observe, “Hmmm, must be an election year. Even the snowmen are dirty.”

Politics, of course, extends to the subject of global warming, and many entries referenced this ongoing debate. Jim Hering of Marion, Ohio, represents this group with, “If Al Gore is correct, this may become an extinct species.”

Charlie Brown is the modern-day equivalent of an old cartoon from my youth called Sad Sack. That character suffered the indignities and humiliations of military life, while Charlie Brown suffers the indignities and humiliations of being an unpopular kid who seemingly can’t do anything right. So, Gordon Trotter of Sarasota, Fla., hit a nerve with the line that won the nonphilatelic part of the contest.

A gentler thought from Steven Kois of Omaha, Neb., won the philatelic part of the contest. Kois has an off-stage observer saying, “Warning: Peanuts stamps may cause global heartwarming!”

“Now we need to give him some arms to hold a football so he can substitute for my unreliable place-kick holder,” from Norman Rushefsky of Silver Spring, Md.

“Quick, I need a selfie before I disappear!” sent by Lawrence Segel of White Plains, N.Y.

“Snowmen are usually white. Let’s see if this one is a color error,” by Laura and Tom Tomaszek of Cedar Rapids, Iowa.

“Do you think this qualifies as the biggest snow job of the year?” from Steve Kotler of San Francisco, Calif.

“Yes, Pigpen, I do believe the mailman will know this is your house with this snowman standing in front of it,” by Bradley Miller of Huntsville, Ala.

The next cartoon caption contest will be announced in the Oct. 9 Linn’s.