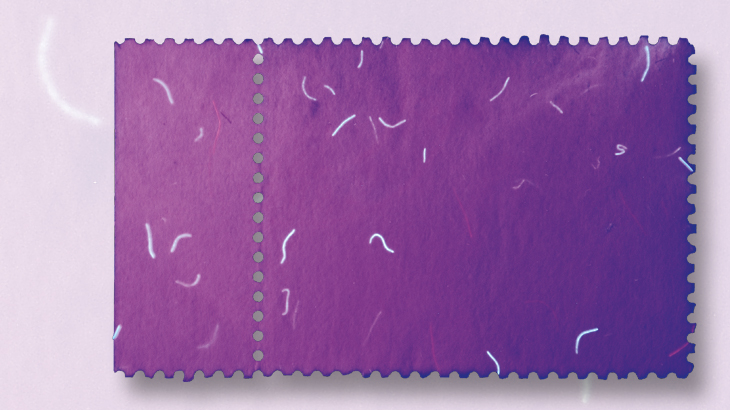 Other fibers embedded in the paper of the 1995 $10.75 Express Mail stamp are visible with an ultraviolet light. 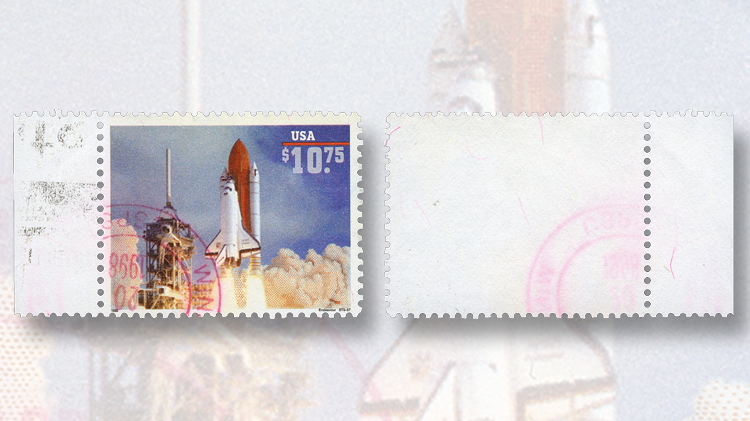 This beautiful 1995 $10.75 Express Mail stamp contains an anti-counterfeiting device: random red fibers that can be seen here in the selvage and on the reverse.
Previous
Next

David Trutwin, a sharp-eyed Linn’s reader, caught an oversight in the Scott catalog. He initially wrote to me to say he had found several examples of the 1995 $10.75 Space Shuttle Express Mail stamp (Scott 2544A) with very light red threads embedded in the paper that were visible without magnification.

Making a long story short, I examined my examples of the stamp under magnification, and all of them had the threads. In addition, Charles Snee, managing editor of Linn’s and the Scott catalogs, looked at his examples and also found the threads.

This sent me to the 1995 Linn’s U.S. Stamp Yearbook which says: “The Express Mail stamp did have one novel (and unannounced) security element: It was printed on a special paper containing fibers both visible and invisible to the naked eye. The paper was supplied by a British firm, Coated Papers Ltd., and is called Fibred Stamp Base paper. The fibers vary in length from about 1/16 inch to ¼ inch and were added randomly to the pulp during the manufacturing process. Red fibers can be seen on the gum side of the stamps, as well as in the unprinted selvage areas on the printed side.”

At the time I was examining the stamps, this special paper was not mentioned in the Scott catalogs. However, that has been rectified starting with the 2018 Scott Standard Postage Stamp Catalogue. The new catalog note reads, “Scott 2544A was printed on paper embedded with red fibers.”