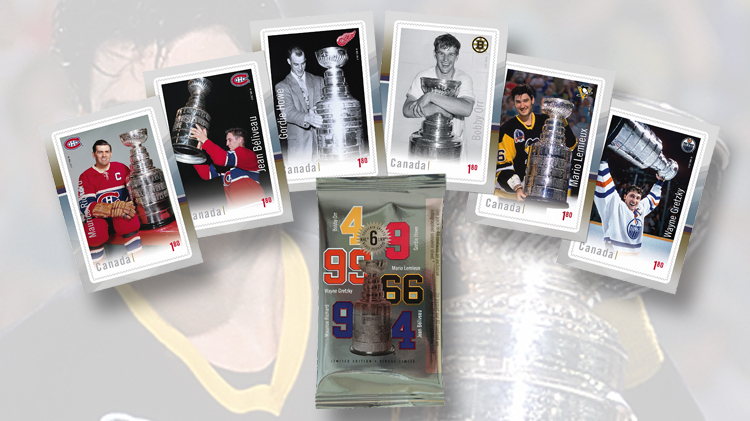 These large stamps, called “hockey-card souvenir sheets” by Canada Post, mimic the look of hockey cards, with a picture of the player with the Stanley Cup on the front and career statistics on the back. 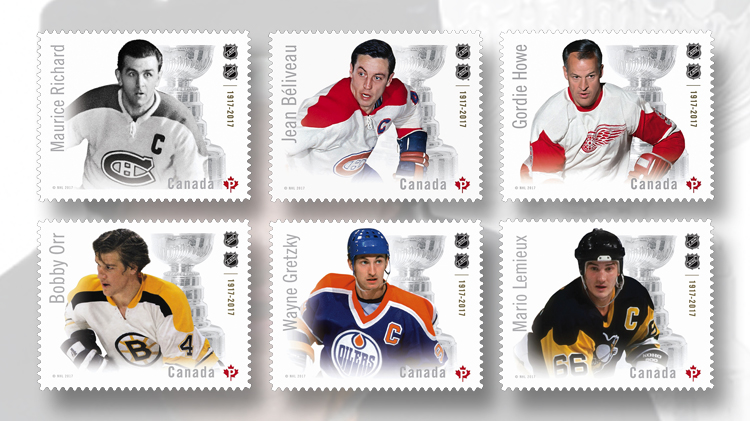 Canada Post unveiled the Canadian Hockey Legends stamps Sept. 27 and issued them the next day, Sept. 28. The legends are Maurice (Rocket) Richard, Jean Beliveau, Gordie Howe, Bobby Orr, Mario Lemieux, and Wayne Gretzky — six of the finest ever to compete
Previous
Next

On Sept. 27, a week before the National Hockey League opens its centennial season, Canada Post revealed its Supreme Six — the final installment in its five-year NHL Stamp Collection — in a ceremony at Canada’s Hockey Hall of Fame in Toronto, Ontario, Canada.

SportsNet, a national Canadian sports media service, saluted the six on the new stamps in a one-line summary of their astounding statistics: “As a group, the players scored more than 9,500 points in almost 7,000 regular-season games, won 40 Stanley Cup championships — 30 as players and another 10 as management — and more than 80 individual awards.”

The stamps were issued Sept. 28 in three formats: in a booklet of six self-adhesive stamps, in a small perforated pane of six with moisture-activated gum, and in individual souvenir sheets designed to look like hockey cards.

Each of the stamps in the booklet and in the perforated pane are nondenominated permanent stamps paying the domestic letter rate (currently 85¢). They feature the same designs, which Canada Post describes as a “head-and-shoulders image of the player in uniform, with the Stanley Cup image ghosted in the background.”

Lord Stanley’s famous cup is pictured in the center of the perforated pane, and is also shown on each of six items that Canada Post calls “hockey-card souvenir sheets.”

These vertically formatted 52-millimeter by 78mm $1.80 stamps resembling hockey cards feature full images of the players holding the Stanley Cup. On their backs, as on hockey cards first popularly collected in the early 20th century, are printed career statistics that tell part of each player’s professional story.

Complete sets of six (called “packs” by Canada Post) are sealed in a foil pouch, as modern sports cards often have been.

Canada Post noted, “One in 40 packs includes an original autograph by Bobby Orr or Mario Lemieux.”

Avi Dunkelman and Joe Gault of Mix Design in Toronto designed the stamps using photographs courtesy of the Hockey Hall of Fame and from Getty Images.

The FDCs picture a scene from each stellar career, with each stamp tied by a first-day cancellation from the player’s birthplace in Quebec, Ontario, or Saskatchewan, and each showing the logo of the team on which he starred. Sets of six FDCs (414056131) are $11.10.

Canada Hockey Legends stamps and related items are available online here. Stamps and FDCs are available by mail order from Canada Post Customer Service, Box 90022, 2701 Riverside Drive, Ottawa, ON K1V 1J8 Canada; or by telephone from the United States or Canada at 800-565-4362, and from other countries at 902-863-6550.