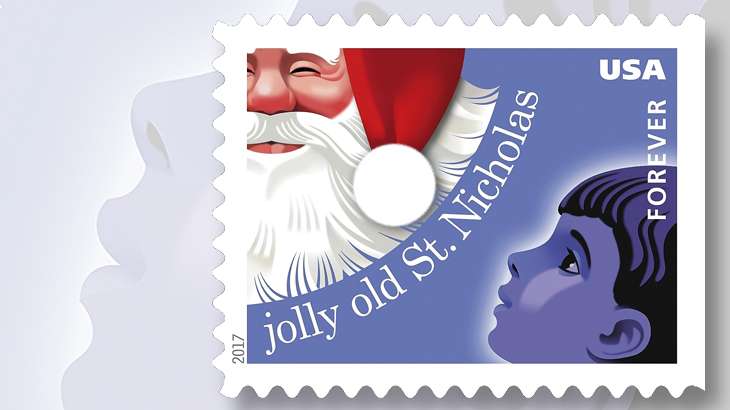 Santa Claus is featured on the Jolly Old Saint Nicholas forever stamp, one of four Christmas Carols stamps to be issued Oct. 5 in a double-sided pane of 20. 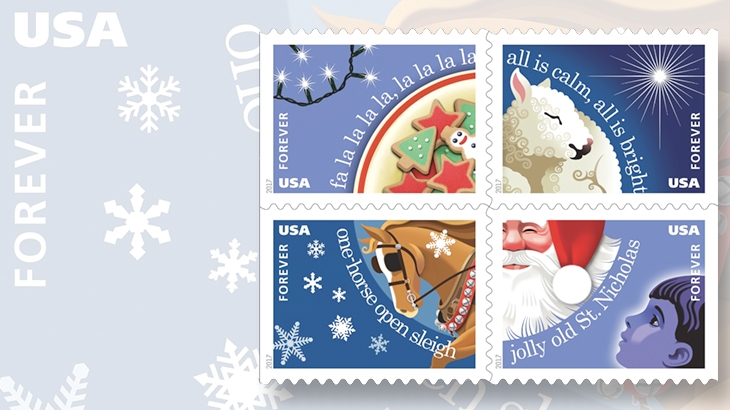 Four Christmas carols are featured on the four forever stamps to be issued Oct. 5. The songs illustrated on the stamps are Deck the Halls, Silent Night, Jingle Bells, and Jolly Old Saint Nicholas. 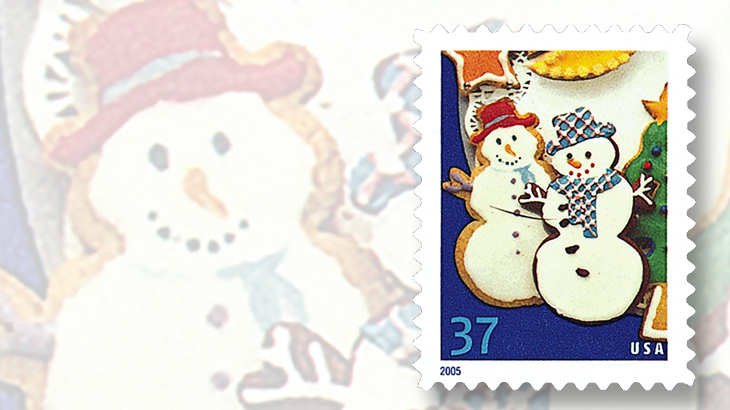 A snowman cookie appears on the new stamp for the song Deck the Halls. This earlier stamp from 2005 showed similar decorated cookies. 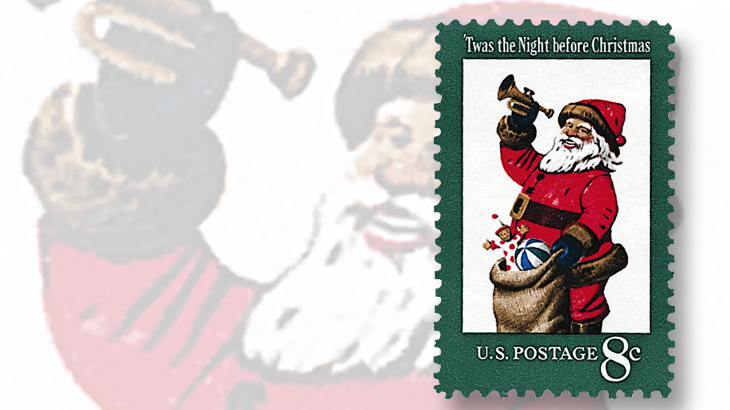 The first appearance of Santa Claus on a U.S. stamp came in 1972, illustrated by Stevan Dohanos. The new stamp for Jolly Old Saint Nicholas is the latest to feature the holiday favorite. 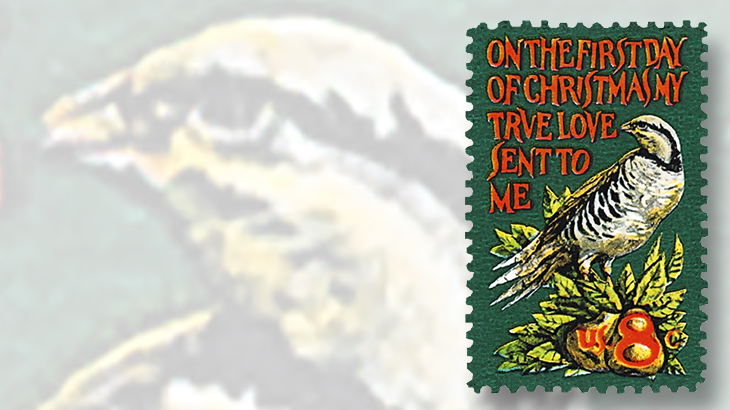 The first Christmas stamp to illustrate a popular holiday carol was issued in 1971. Jamie Wyeth’s design shows a partridge in a pear tree and lyrics from The Twelve Days of Christmas.
Previous
Next

The nondenominated (49¢) forever stamps each depict a scene and a phrase evoking one of four Christmas songs: Deck the Halls, Silent Night, Jingle Bells, and Jolly Old Saint Nicholas.

The self-adhesive stamps will be issued in a double-sided pane of 20, which the Postal Service describes as a booklet. A first-day ceremony has been scheduled for noon Oct. 5 at the New York Hilton Midtown, 1335 Avenue of the Americas (Sixth Avenue and W. 53rd Street).

The issue date is the first day of the ASDA Fall Postage Stamp Show, taking place at the hotel Oct. 5-7. Admission to the show and the Thursday first-day ceremony is free.

Among those participating in the ceremony will be USPS director of Stamp Services Mary-Anne Penner, USPS brand marketing executive director Christopher Karpenko, and American Philatelist editor Jay Bigalke, who is leaving the American Philatelic Society staff in October to begin work as Linn’s Stamp News editor-in-chief.

“The shades of blue in the backgrounds of the stamps evoke the evening scenes from the four carols,” the Postal Service said about the new set.

“The stamp art is designed so the stamps are as graphically pleasing in a group as they are individually. Familiar lyrics from each song highlight the individual stamps. The artist first sketched the artwork in pencil and then rendered it as a digital illustration.”

Howard E. Paine, who died in 2014, was art director for this issue.

The first Christmas carol featured on a U.S. stamp was The Twelve Days of Christmas, on a Christmas stamp for the 1971 season (Scott 1445). The illustration by Jamie Wyeth shows a partridge in a pear tree, and the first line of the song.

The four songs immortalized on this new set include two with origins from other countries.

Deck the Halls is derived from a Welsh tune published in the late 18th century, according to the Postal Service. New lyrics were created and published in 1862 by Scottish poet and musician Thomas Oliphant (1799-1873).

The stamp design includes holiday lights and a plate of Christmas cookies. A decorated snowman cookie on the plate is reminiscent of the 37¢ Snowmen Cookies stamp issued in 2005 as part of the Christmas Cookies set (Scott 3950, plus varieties 3954 and 3958).

The only song among these four to relate the Christian story of Christmas is Silent Night, created in 1818 when Austrian church organist Franz Xaver Gruber put music to a poem written a few years earlier by an Austrian priest, Joseph Mohr.

Mohr’s poem describing the Nativity was translated into English in 1859 by Episcopal priest John F. Young.

The stamp depicts a sleeping lamb and the star of Bethlehem, a design that also reflects the lyrics printed on the stamp: “all is calm, all is bright.”

Jingle Bells is represented on a stamp with a sleigh horse wearing blinders and a collar of jingle bells. White snowflakes are seen against the blue background, and the lyrics read, “one-horse open sleigh.”

The song was written by James L. Pierpont, then music director of a Unitarian church in Savannah, Ga., where snow accumulation is almost nonexistent. Pierpont obtained a copyright under the title One Horse Open Sleigh in 1857, but renamed the song soon after.

Though it is one of the most popular Christmas songs of all time, the lyrics never even mention the holiday.

According to the Postal Service, the lyrics for Jolly Old Saint Nicholas were adapted from the poem Lilly’s Secret, written by children’s author Emily Huntington Miller.

“The poem’s first known publication was in the December 1865 issue of The Little Corporal, a children’s magazine. The song was first published in the 1870s, but the tune’s composer is unknown.”

The stamp design shows a traditional rendition of Santa Claus — the modern-day alter ego of Saint Nicholas — and the face of a youngster gazing upon him. The lyrics read, simply enough, “jolly old St. Nicholas.”

Santa Claus has been a popular subject on U.S. Christmas stamps, with at least two dozen appearances since the first — an illustration by Stevan Dohanos on an 8¢ stamp in 1972 (Scott 1472).

Along with the double-sided panes sold in post offices, the Postal Service is offering an undisclosed number of press sheets for sale consisting of eight panes of 20, or 160 stamps, at the face value of $78.40.

Although the four stamps in the Christmas Carols set are the only Christmas stamps being issued by the Postal Service in 2017, USPS officials told Linn’s Stamp News that the agency has additional holiday stamp inventory on-hand.

The online USPS Stamp Store shows all of the 2016 Christmas stamps available, including a Madonna and Child forever stamp and a Nativity forever stamp, plus 2016 issues for Eid, Diwali, Hanukkah, and Kwanzaa.

Technical details and first-day cancel ordering information for the Christmas Carols stamps can be found below:

Standard ordering instructions apply. Collectors requesting first-day cancels are encouraged to purchase their own stamps and affix them to envelopes. The first-day cover envelopes should be addressed for return (a removable label may be used), and mailed in a larger envelope addressed to Christmas Carols Stamps, USPS Stamp Fulfillment Services, Cancellation Services, 8300 NE Underground Drive, Suite 300, Kansas City, MO 64144-9900.

Requests for first-day cancels must be postmarked by Dec. 5.