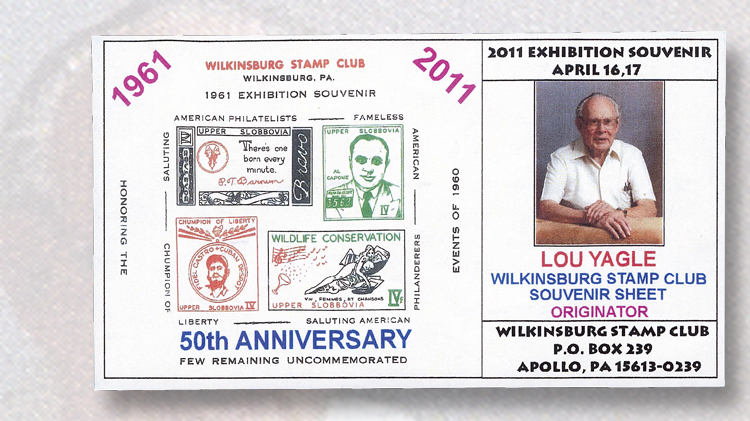 The Wilkinsburg Stamp Club’s 2011 souvenir sheet honors the founder of this satirical series, Lou Yagle, and also depicts the first sheet of 1961. 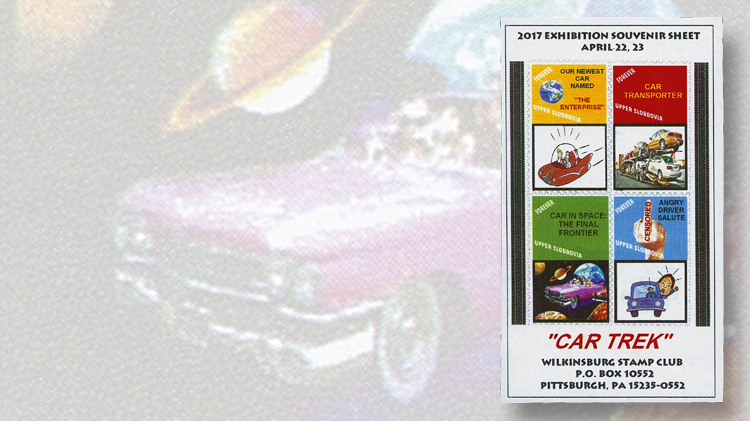 The Wilkinsburg Stamp Club’s 2017 souvenir sheet spoofs the 2016 United States Star Trek stamps, plus stamps showing cars and trucks. Most of the prior sheets are still available. 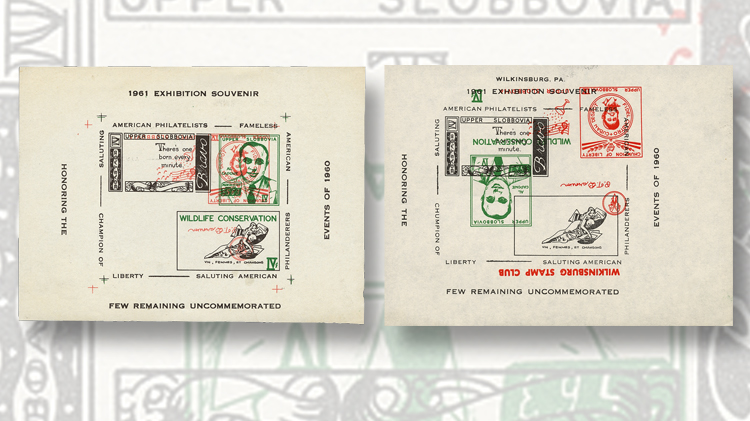 There aren’t many printing varieties of the Wilkinsburg Stamp Club’s Upper Slobbovia spoof souvenir sheets, but these two of the 1961 exhibition sheet were recently discovered in the stock of a retail dealer.
Previous
Next

Lou Yagle has an honored place in United States philatelic history as the creator of the clever, well-respected and widely collected Upper Slobbovia spoof souvenir sheets.

Their purpose has been to help finance the Wilkinsburg Stamp Club’s annual stamp show, Wilkpex, held each April near Pittsburgh, Pa.

Since the first souvenir sheet in 1961, the eagerly awaited color souvenirs have become a tradition and have attracted a nationwide following, bringing a much needed dose of fun to what can be a quiet, serious, and even self-absorbing hobby.

Yagle himself, titled the Grand Slob, designed and produced the sheets from 1961 until his passing in 1997. He was honored on the 2011 sheet commemorating the 50th anniversary of the project. As shown nearby, it reproduces the hilarious 1961 first sheet.

On its website, the club explains the origins of these sheets: “This all started when the Government, in 1960, issued such an abundance of commemoratives that it caused humorous comments from the tongs of collectors and the pens of Philatelic Publications. We thought we should join the fun and issue a sheet of stamps of the uncommemorated events of 1960, expecting to sell them at our exhibit to help defray expenses.”

Coincidentally, I recently obtained what appears to be printer’s waste from that 1961 sheet. I didn’t know such material existed.

An order form can be found at the club’s website. You also may request sheets by writing to the Wilkinsburg Stamp Club, c/o Gene Bujdos, Dept. W, Box 5649, Pittsburgh, PA 15207.