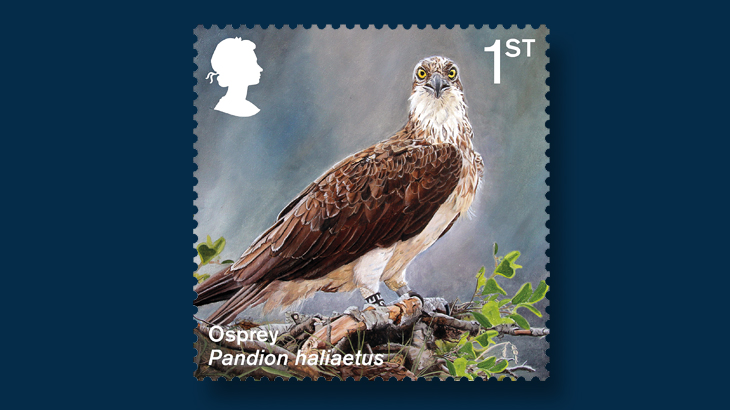 A set of six British stamps to be issued in April will feature plants and animals that were once extinct in the United Kingdom but have been reintroduced, such as the osprey. 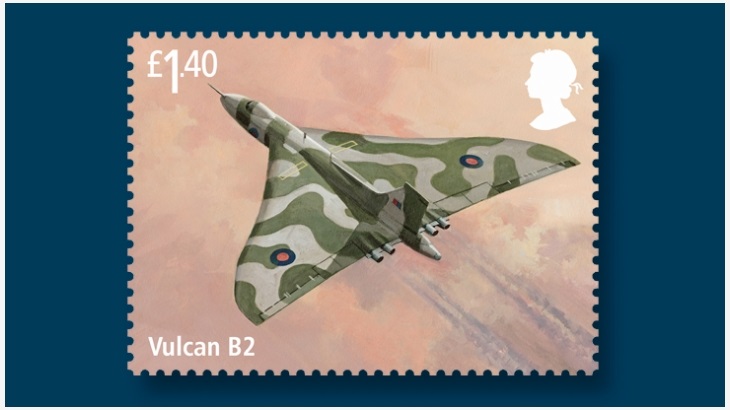 Great Britain’s Royal Mail will commemorate the 100th anniversary of the Royal Air Force on 10 stamps to be issued in March. Six of the stamps will picture iconic British aircraft. 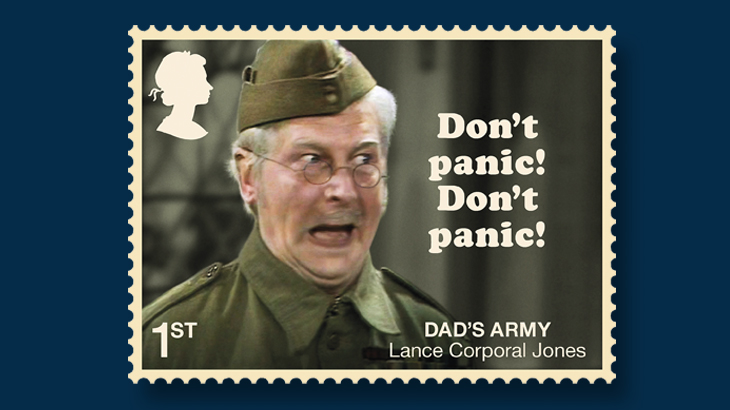 Eight stamps to be released by Royal Mail in June will mark the 50th anniversary of the television series Dad’s Army.
Previous
Next

On Dec. 27, Great Britain’s Royal Mail revealed some of the commemorative issues that will be included in its 2018 stamp program.

A set of 10 stamps in March will celebrate the 100th anniversary of the Royal Air Force.

On April 1, 1918, the Royal Naval Air Service and the Royal Flying Corps merged to create the RAF, the world’s first independent air force, according to the website for the centennial.

Royal Mail reports that six of the stamps in the RAF Centenary issue will show “original artworks of iconic British aircraft from across the century.”

The other four stamps will feature the RAF Red Arrows aerobatics team. The Red Arrows were previously featured on a 2008 issue that marked the 100th anniversary of the first powered flight in Great Britain.

A set of six stamps scheduled to be issued in April will feature species of plants and animals that were once extinct in the United Kingdom but have been successfully reintroduced.

For instance, one stamp depicts the osprey (Pandion haliaetus). The website of the conservation charity Trees for Life said of this raptor:

“The osprey was once widespread throughout the UK but, due to severe persecution from the Middle Ages onwards, numbers plummeted. In the 19th century a new threat appeared, in the form of egg collectors and, by the end of the 19th century, only a handful of breeding pairs remained. A conservation programme was initiated and, thanks to a combination of long-term protection and innovative restoration techniques, the osprey is once again established in stable numbers in the UK.”

Another stamp in the set will show the large blue butterfly, which became extinct in the United Kingdom in 1979, but is now thriving.

Dad’s Army, a British television comedy about volunteers in the Home Guard during World War II, debuted in 1968. To mark the 50th anniversary of Dad’s Army, Royal Mail will issue eight stamps in June depicting popular characters from the series.

Stamps to be issued in July will showcase the Hampton Court Palace, the 16th-century palace built for Cardinal Thomas Wolsey and later extensively remodelled for use by King Henry VIII.

An August stamp issue will commemorate Capt. James Cook and the Endeavour voyage. Cook set sail from Plymouth Harbor in England in August 1768 for a voyage of discovery in the South Pacific.

In September, Royal Mail will end its five-year World War I series. According to Royal Mail, “The set will feature a new interpretation of the poppy image, war poetry and art, and a commemoration of the sacrifice of the armed services.”

Royal Mail will close out its 2018 program with Christmas stamps in November.

This program is tentative and likely to include additional stamps, plus post & go vended postage labels.