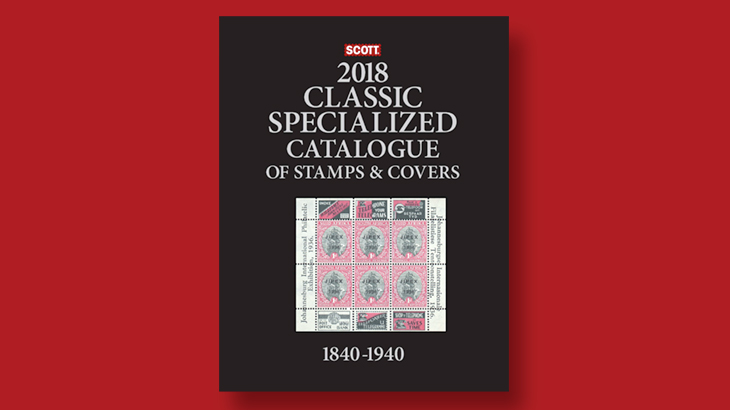 The 2018 Scott Classic Specialized Catalogue of Stamps and Covers 1840-1940 is now available.

Now in its 24th year, the Scott Classic Specialized Catalogue of Stamps and Covers 1840-1940 is widely recognized as the best single-volume catalog for classic-era stamps of the world.

Almost 6,800 value changes were made to the recently published 2018 Scott Classic Specialized catalog. Add to this almost 10,400 value changes brought over from the 12 volumes of the 2018 Scott Standard Postage Stamp Catalogue, and the total number of value changes soars to more than 17,000.

Special thanks also go to our many advisors who offer improvements each year to make this catalog an invaluable reference work for worldwide classic stamps.

The marketplace for Canada and Canadian Provinces overall has been soft during the past year, and the large number of value changes in the 2018 Scott Classic Specialized catalog tend to reflect that weakness. Many exceptions occur among scarce-to-rare stamps that seldom appear in the Scott benchmark grade of very fine. For these scarce stamps in nice quality, demand continues to far exceed supply.

On the other hand, Newfoundland stamps from the 1897 issue through to about 1931 tend to show slight decreases in value.

In Canada, classic issues are very much holding their own. Values for many 20th-century stamps show the effects of a softening of the market, but not in a major way. Decreases in values are selected and rather modest.

A careful review resulted in more than 100 value changes among the listings for the United States administration of Cuba. Some of the changes are significant.

In 1898, Spain relinquished its claims over Cuba to the United States in the aftermath of the Spanish-American War. In 1898, Puerto Principe, a provincial capital now known as the city of Camaguey, ran low on stamps. Cuban stamps issued in 1896 and 1898 were surcharged for provisional use.

Values for these surcharged stamps, known as the Puerto Principe issues, increase significantly in the 2018 Scott Classic Specialized catalog. On-cover values have been added to these listings for the first time.

In addition to the more than 130 value changes for Mauritius that were carried over from Vol. 4B of the 2018 Scott Standard catalog, more than 145 value changes were made to listings that appear only in the Scott Classic Specialized catalog.

More than 1,400 value changes were made to Italian States. When combined with the more than 650 value changes made in Vol. 3B of the Scott Standard catalog, approximately 2,050 values were changed for Italian States stamps during the 2018 catalog season. These changes reflect a general softening of the market.

An Abundance of Editorial Enhancements Found Throughout

Canada No. 195d, the 1932 1¢ dark green, is now recognized as being a rotary press, dry printing on gummed paper. Previously, this stamp was thought to be a flat-plate printing and was listed as such, but recent convincing research indicates the listing for this stamp in catalogs has been inaccurate.

Listing clarifications occur throughout for Canada semi-official airmail stamps, and a number of new lettered minors have been added for Scott CL30 and CL49.

Almost 230 minors were added to New Zealand, along with three major numbers. The 1871 2-penny blue is now listed as Scott 38A, and the 2p vermillion has been assigned Scott 38B. Only one of each is known, but they are well-documented. The 1871 2p blue is the newly listed Scott 42A. The new minor listings include perforation varieties; color varieties; and vertical and horizontal pairs, imperforate between.

A new major number, Scott 1A, was added to Fiume. The Hungary 20-filler Harvesters gray-brown stamp overprinted “FIUME” was issued Dec. 2, 1918. The black overprint is in bold sans-serif letters. Fiume Scott 1-23 are overprinted with a serif font. The new listing is valued at $4,000 unused and $2,500 used. Many new minor varieties also are added to Fiume.

Values for never-hinged stamps were added throughout the Iceland listings, many for the first time. Also notable for Iceland are numerous new on-cover and revenue-cancellation listings.

Values for postally used Wurttemberg Official stamps are added for the first time.

Two printings exist for the first stamps of Azerbaijan issued in 1919. The printing on thin white paper is listed as Scott 1-10. In the 2018 Scott Classic Specialized catalog, the set on grayish paper is now listed as major numbers 1A-10A.

In addition to the hundreds of value changes made to the Saudi Arabia listings, almost 100 new minors are added to the listings of Hejaz.

Scott printing and imaging coordinator Stacey Mahan and scanning specialist Lori Billing work tirelessly each year to improve the images in the Scott catalogs, and this edition of the Scott Classic Specialized catalog bears the fruits of their efforts.

As an example of what has been added this year, see Turkey Scott 565-582. New images have been added for this 1919 stamp set overprinted on stamps of 1911-19. The overprint in Turkish reads: “Accession to the Throne of His Majesty, 3rd July 1334-1918.” The overprint also features the tughra (or monogram) of Sultan Mohammed VI. Some of the stamps in the set feature ornaments as part of the overprint, and some are surcharged with new denominations.

The 24th edition Scott Classic Specialized catalog brings to a close the 2018 Scott catalog season, during which we celebrated the 150th anniversary of the Scott catalogs.