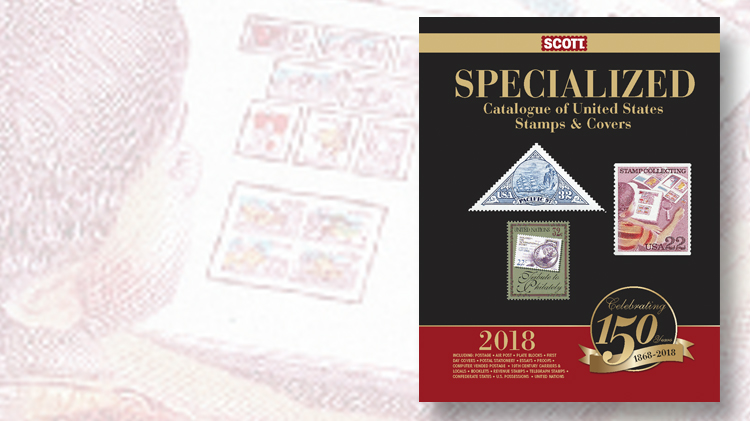 But before we turn our attention to the many value changes and editorial enhancements, we salute Scott editor emeritus James E. Kloetzel for working tirelessly on the thousands of value changes and hundreds of editorial changes. He and the Scott editors have been busy adding and expanding listings and making significant improvements throughout the catalog. Special thanks to Scott managing editor Charles Snee for leading this colossal project from the home office in Sidney, Ohio.

While there are many editorial enhancements in 2018, the big story is the large number of lowered values for stamps in very fine condition. These lowered values are the result of the editors tracking a softening of the overall market for these United States stamps. With more than 3,000 value changes occurring between Scott 1 and 771, the comprehensive nature of these changes is obvious. Lower values are the rule, with few exceptions.

Two other areas deserve mention for higher values. The first area is revenues, where the Scott editors were fortunate to obtain from stamp dealer Michael E. Aldrich of Carefree, Ariz., census figures from his soon-to-be available updated and expanded census of scarce and rare revenue stamps.

Many of these revenues have turned out to be even scarcer than most collectors or dealers think, and when the census is released later in 2017, some collectors who thought they had stretched this year’s budget to buy needed revenue stamps will be very glad they did.

The other area showing considerable value growth is proofs, in particular the Scott P2a proofs issued for the 1915 Panama-Pacific Exposition, and the small die proofs (P2) of the 20th century.

Among the values for graded stamps, values from about grade 85 and below are down in the Postage section almost across the board, while values for grades 98, 95, and some stamps in grade 90 continue to exhibit stability and, in a few cases, are even higher than before.

WHAT EDITORIAL ENHANCEMENTS HAVE BEEN MADE?

As usual, earliest-documented-use dates have been updated (six new dates have been added in Postage this year, plus five more in the Christmas Seal section), and a great many new errors have been added. New and clarified footnotes abound to assist collectors in their understanding of the listings and values.

An extensive new note after the 1934 National Parks issue (Scott 740-749) explains the appearance of gummed imperforates in the marketplace from sheets improperly given to favored individuals by Postmaster General James A. Farley. These varieties were not sold in post offices and will not be listed by Scott.

The Computer Vended Postage section has more new listings, as does the Locals section, with the addition of stamps for the Chestnut Street Line in Philadelphia and the Union Despatch in Chicago.

Among early revenues, more varieties — such as double transfers, cracked plates, scratched plates, and gouged plates — have been added, and imperforate stamps are listed as Scott R112b and R115b.

The Specimens and Postal Counterfeits sections see a number of new additions each.

The Test Stamps section has seen its usual thorough review, with a great many clarifications and new major-number varieties added.

Finally, the Canal Zone section now contains a comprehensive and extensive new group of listings for the specimens from the American Bank Note Co. archives. Members of the Canal Zone Study Group have been studying these stamps for years, and their work has been completed and shared. Their help is appreciated.

To purchase the 2018 Scott catalogs, contact your favorite dealer, or call Amos Media at 1-800-488-5349. Also visit Amos Advantage and Scott Online for the eCatalogues.