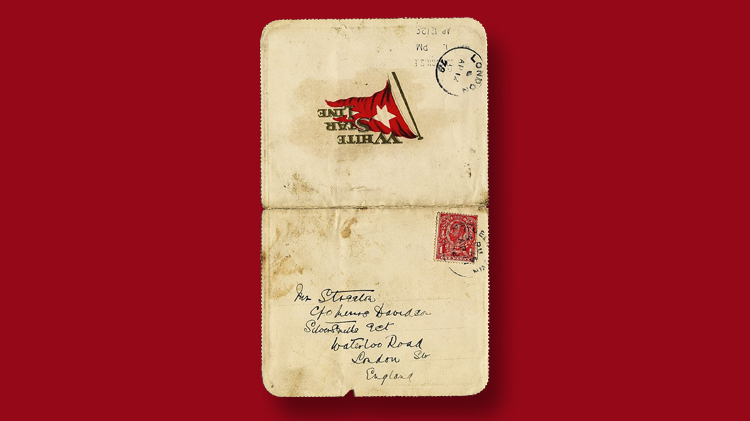 A letter card written aboard RMS Titanic in 1912 and mailed from Ireland will be auctioned April 21 by Henry Aldridge and Son in England.

An upcoming auction in England is offering numerous artifacts of the doomed luxury liner RMS Titanic, which sank in the North Atlantic Ocean on April 15, 1912.

The April 21 auction by Henry Aldridge & Son includes a wide range of items, such as a publicity booklet, photographs and picture postcards of Titanic and other vessels, the liner’s chart room key with brass tag, menus, glassware and silverware, and much more. The Titanic memorabilia makes up most of the 240 lots of the Saturday sale.

There are also several items of interest for the postal history collector.

One of these is a postal facing slip that was recovered from the body of Oscar Scott Woody, a 41-year-old postal clerk from the United States who was working in the ship's mailroom and perished in the disaster. The 3-inch by 5-inch buff-colored slip is stamped “O.S. Woody” and “TITANIC” and marked with the ship’s trans-Atlantic postal cancellation.

Another postal item on offer is a “rare Titanic letter card written on board and posted with original one penny stamp and crisp Queenstown postmark.”

The cryptic message on the letter card (which includes the admonishment, “My wife is in England. Do not write to her”) was written onboard by Henry Beauchamp, a second-class passenger who also died in the sinking. The letter card features a bold color imprint of the White Star Line burgee and is franked with what appears to be the re-engraved 1-penny red King George V stamp issued Jan. 1, 1912 (Great Britain Scott 154).

The ship departed from Southampton on England’s southern coast at noon on April 10, 1912, heading across the English Channel to dock at Cherbourg, France, where more passengers boarded. At 11:30 a.m. on April 11, Titanic arrived at Queenstown, Ireland, the ship’s final port of call before heading west across the North Atlantic to its intended destination, New York City. Beauchamp’s letter card, addressed to London, was mailed at Queenstown on the 11th and was struck with a London receiving postmark the following day.

A few other items of correspondence and postcards are included in this auction, which is posted on the auction firm's website. The Aldridge and Son firm also reports that live Internet bidding is available through the-saleroom.com or invaluable.com.