You can’t always judge a cover by its appearance 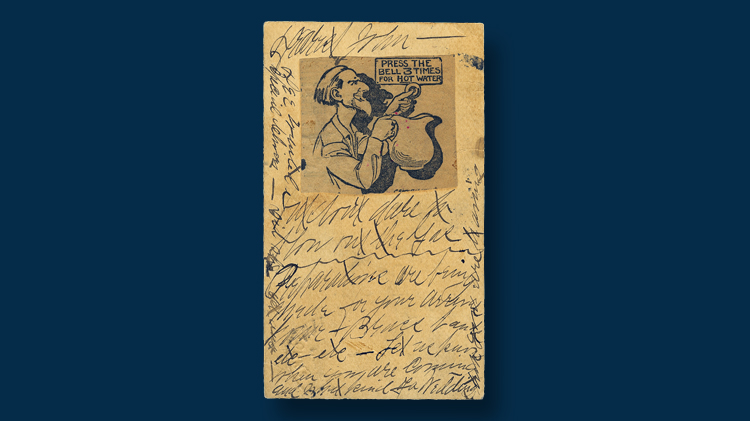 The reverse side of the 1902 postal card used in 1906, shown nearby, has a pasted-on cartoon, a feature that would have required payment of the first-class rate as post office rules prohibited adding anything to postal cards.

Some collectors are purists. Condition for them is everything. While they are fine people entitled to their choices, I don’t claim membership in their fraternity.

I’m happy to pick up the ugliest of dogs for my collection if it tells a great story.

With that as background, the 1¢ McKinley postal card sent in 1906 from West Virginia to New York, shown front and back here, was a gift from retired postal stationery dealer Lyle Hall of Richmond, Va. And despite the postal card’s stained front, I’m happy to have it.

This is a scarce usage. Not only were few postal cards sent special delivery in that era, but this one has a feature that makes it nearly unmatchable.

Note that in addition to the 10¢ special delivery stamp, the card has an extra 2¢ postage stamp beyond what would seem to be needed for postage.

The card also has something extra on the reverse side — a pasted-on cartoon. According to post office rules that prohibited any additions to postal cards, this card had to be treated as first class-mail and charged the then-current 2¢ rate.

Apparently the sender recognized that this was the case because the 2¢ Washington Shield stamp was used as part of the postage paid. This ignores the intrinsic value of the 1¢ 1902 McKinley postal card (Scott UX18), so the card is actually 1¢ overpaid.

Just to add a little extra dash of scarcity, the card is also a railroad cover because it traveled part of the way on a New York and Pittsburgh Railway Post Office car, according to the cancellation at lower left.