Harmer-Schau auction May 13 at Pipex 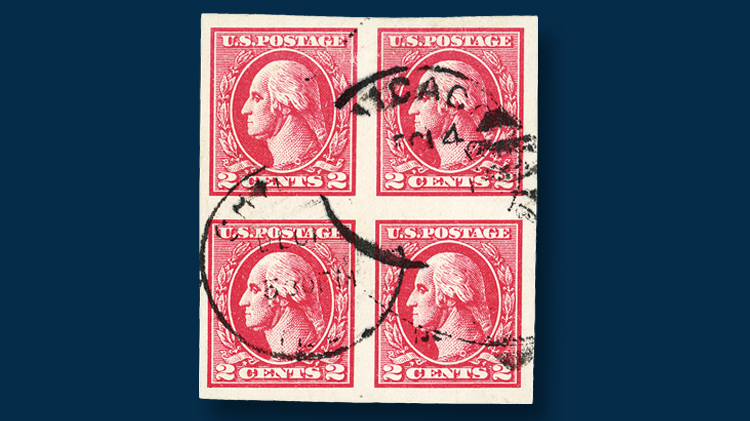 A rare used block of four of the 1920 imperforate offset 2¢ carmine type VII George Washington will be auctioned May 13 by Harmer-Schau.

Harmer-Schau Auction Galleries will conduct its next public auction May 13 in association with the Pipex stamp show in Portland, Ore.

The 770-lot sale will take place Sunday at 10 a.m. in the Hayden Room at the Red Lion Hotel-Jantzen Beach, 909 N. Hayden Island Drive in Portland, where the show is taking place May 11-12.

The auction opens with foreign and British Commonwealth single lots, followed by more than 330 lots of United States material. Numerous collections also are being offered.

A highlight among the 20th-century material is a rare used block of four of the 1920 imperforate offset 2¢ carmine George Washington stamp, type VII (Scott 534B). The block is postmarked with two strikes of the Chicago, Ill., cancel, and is described as extremely fine with a light vertical crease at right.

Research from 2003 by Larry S. Weiss and George P. Wagner published in Linn’s Stamp News identifies a block of four as the largest known used multiple for this issue.

The Scott Specialized Catalogue of United States Stamps and Covers values a used block of four at $7,250, listed in italics to denote an item that can be difficult to value accurately. Harmer-Schau suggests an estimate of $4,000 for this block, with an opening bid of $3,250.