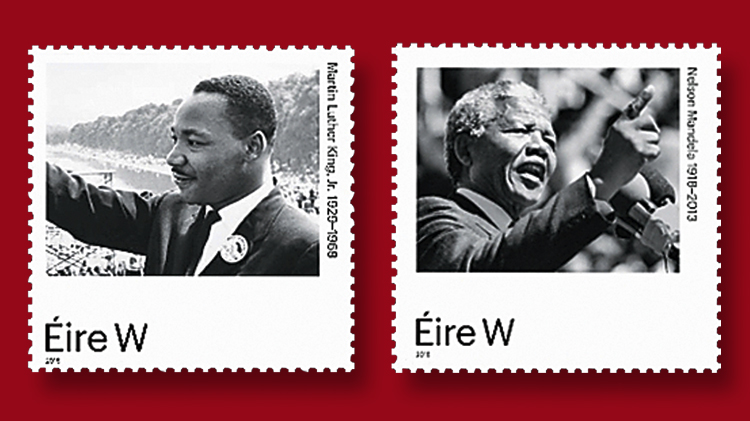 Joanne Ferris of Irish Stamps (An Post’s philatelic bureau) said, “Both stamps feature iconic photographs of the great men as they address mass public gatherings of their followers.”

King, the leader of the civil rights movements in the United States in the 1960s, is shown at the 1963 March on Washington for Jobs and Freedom.

The highlight of this protest march was King’s “I Have a Dream Speech,” delivered from the Lincoln Memorial to a crowd of approximately 250,000 people on Aug. 28, 1963.

Less than a year later, the Civil Rights Act was signed into law.

As part of the online version of the exhibit “The Civil Rights Act of 1964: A Long Struggle for Freedom,” the Library of Congress summarized the Civil Rights Act: “Considered the most significant piece of civil rights legislation since Reconstruction, the act prohibits discrimination on the basis of race, color, religion, sex, or national origin in voting, public accommodations, public facilities, public education, federally funded programs, and employment.”

The exhibition can be found here.

The stamp includes an inscription with his name and the years of his birth and death “1929-1968” on the right side.

An inscription at the bottom of the stamp includes the country name “Eire” and a “W.” The letter indicates that the stamp pays the basic domestic rate, currently €1.

South Africa’s anti-apartheid leader and president from 1994-99, Mandela also was a Nobel Peace Prize winner. In accepting the award in December 1993, Mandela mentioned King, “He, too, grappled with and died in the effort to make a contribution to the just solution of the same great issues of the day which we have had to face as South Africans.”

“In the 1950s he was elected leader of the youth wing of the African National Congress (ANC). He was arrested in 1962 and sentenced to life imprisonment for high treason and conspiracy against the state.”

The stamp pictures him speaking to a crowd at Soweto, South Africa, in September of that year.

Like the stamp for King, the Mandela stamp is nondenominated with a “W” in place of the value.

The Dublin-based design studio Aad designed the two International Statesmen stamps. Cartor Security Printing produced them by offset in sheets of 16 with the two designs se-tenant (side by side).