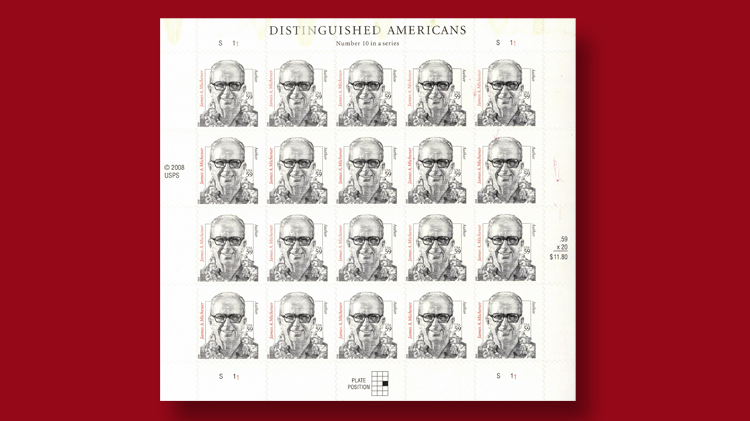 The pane of 20 of the James A. Michener stamp with cyan, magenta and yellow colors omitted. The Philatelic Foundation has certified the error. 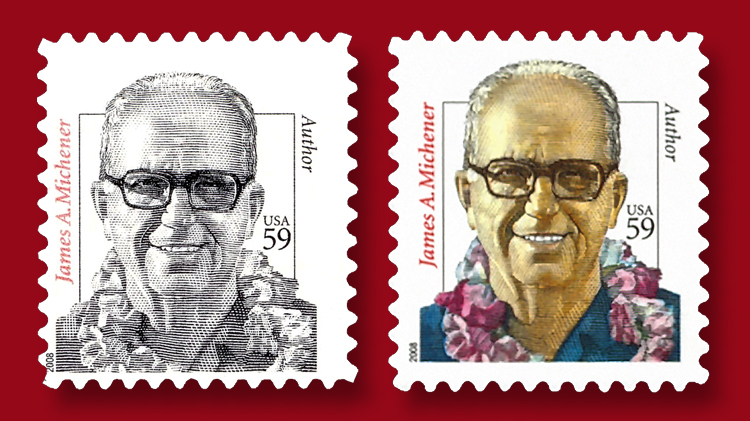 A color-missing error stamp from 2008 was certified in 2016 and later listed in the Scott Specialized Catalogue of United States Stamps and Covers. The 59¢ James A. Michener stamp at left (digitally cropped from the image of an intact pane) is shown with
Previous
Next

A United States definitive stamp issued a decade ago has been discovered with three colors missing.

The design of the 59¢ James A. Michener stamp in the Distinguished Americans definitive series (Scott 3427A) was normally printed with black, red, cyan, magenta and yellow lithographed colors.

The error stamp, found in an intact pane of 20, is missing the cyan, magenta and yellow, with only black and red printed successfully.

The pane was examined by the Philatelic Foundation in February 2016 and was identified as a color-missing error on a certificate of authenticity.

The error stamp was listed as Scott 3427Ac in the 2017 Scott Specialized Catalogue of United States Stamps and Covers. This is the first report and illustration of the error in Linn’s Stamp News.

The pane of 20 is described by the Foundation as genuine, never hinged, with some light stains in the top margin.

The image of the stamp pane was provided by Tim Devaney of Washington Stamp Exchange (which also does business as Washington Press). The company owns the error and is now offering to break it up for sale to collectors.

In a message to Linn’s, Devaney pointed out that there is stray magenta ink on the four stamps in the upper right plate block, and the bar codes and USPS logo are not printed on the reverse of the pane as they should be.

“The James Michener error pane was discovered in a sealed deck of 100 panes that Washington Press bought from Stamp Fulfillment Services shortly after the stamp’s issue date of May 12, 2008,” Devaney told Linn’s.

“The stamps were intended to be used to prepare ArtCraft first day covers. After unsealing the deck, Carol Silva, the office manager and long-time employee of Washington Press, noticed right away that one of the panes was distinctly different from the others. She showed it to me and we realized that we had a major error.”

The error pane remained in the company’s vault as Washington Stamp Exchange sought to determine its potential value.

In the March 2018 edition of The Washington Bulletin, a newsletter published for more than 77 years by Washington Stamp Exchange, the company revealed its ownership of the pane and wrote, “We’ve kept the pane secured in a vault for almost 10 years and another error pane has never surfaced, leading us to conclude that our pane is the only one that exists!”

The five-color 59¢ James A. Michener stamp and the four-color 76¢ Edward Trudeau stamp (Scott 3432A) were the first two stamps in the 2000-09 Distinguished Americans series to have color added to the scratchboard artwork by artist Mark Summers, who created the 12 portraits on the 15 stamps in that part of the extended series.

The two issues were also printed entirely by offset lithography, a change from the series’ normal combination of a black intaglio portrait with black and red offset frame and lettering, respectively.

A 78¢ four-color stamp honoring philanthropist Mary Lasker (Scott 3432B) was issued May 15, 2009, the last of the Distinguished Americans group before the Postal Service revived it with a different design style in 2011.

Devaney told Linn’s: “In order to create more opportunities for collectors to own this error, we decided to break up the pane into 14 pieces — 12 singles and two plate blocks (lower left and lower right). We offered singles for $750, plate number singles for $1,000, and plate blocks of four for $3,500. Each stamp would be accompanied by an official copy of the PF certificate.”

Washington Stamp Exchange was founded in 1932 by Sam and Leo August and produced ArtCraft cacheted first-day covers until the end of 2015. It continues to produce White Ace stamp albums and StampMount brand mounts.

Are these stamps true errors or near misses?